I am very sad to hear that shizhé’é yazhí, Albert Hale, is no longer making footprints.

I met him when I was gathering data for my dissertation research. He invited me to his home to talk about how he put into law two educational mandates that require Native American history instruction in curricula in all Arizona schools. 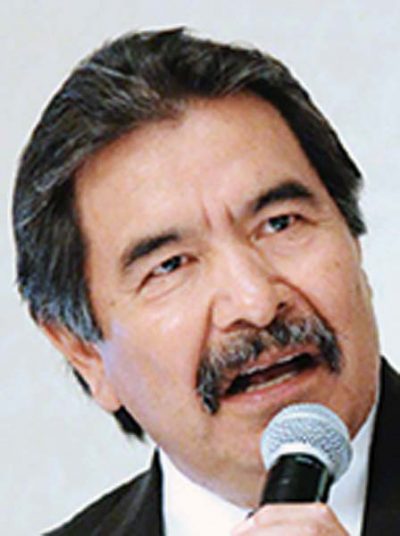 Later, he introduced me to his wife, Paula, and told her that his “long lost daughter had finally come home to hear about her daddy’s stories.”

That day, I learned so much about why he did the work he did and how he advocated for the Diné people and Native peoples in general.

He told me about his time as the Navajo Nation president and the obstacles he faced as he advocated for us. He attended the United Nations Forum on the rights of indigenous peoples in Geneva. That was the first time a Native leader from a Native nation participated and addressed the group.

There, he said to the UN delegates that they ignored the indigenous peoples in the United States in their conversation. He told them that Native nations have a right to self-government that the United States government has recognized, that we have treaties that, under international law, are valid and have land bases. He spoke out to dispel myths and stereotypes of Native peoples.

Also, as president of the Navajo Nation, he wanted to impact Diné students’ education on Diné bikéyah. He wanted them to have an education rich with Navajo knowledge, but he learned that he only had authority over the Head Start system.

As a result, he put forth the executive order to use the Navajo language as the language of instruction in Head Start centers located on the Navajo Nation.

When he became an Arizona state legislator, he fought for progress for Native communities, which are often inhibited by non-Native ignorance of Indian law and communities.

Because the Navajo Reservation is considered federal land, none of the tax revenue returns to the Navajo. Instead, that money goes to the border towns where they use it to build libraries, maintain public parks and aquatic centers, and pave roads. He wanted to change how the state of Arizona could return the tax revenue generated from tribal lands, but the legislative bill died on the Senate floor.

The second bill he introduced that first year as state senator included education about Native sovereignty, government, culture, and history for all Arizona children, Native and non-Native.

He told the policymakers, “I want to ensure that your children, when they are sitting here 20 years from now as leaders and my child is standing here as the leader of the Navajo Nation, I don’t want them to be saying the same thing that we are saying to each other now. I want there to be true mutual respect and understanding and a step in that direction is to start teaching your children about (us).”

Arizona still has this law — let us honor our former president by making this Arizona law come to fruition. Teach Navajo and Native history in all of our schools on Diné bikéyah.

I have immense respect for shizhé’é yazhí. I will forever be grateful for what he has done for us and me specifically. I now continue to do the difficult work he started, being on the frontline educating settler society about us so that we, Native nations and peoples, may have a better future.

Cynthia Benally is assistant professor in Native American education in the Department of Education, Culture and Society at the University of Utah.

He was my brother

He had been hospitalized for more than two weeks, after a fierce battle, seemed to be recovering until that night.

Some of you know that “Ahbihay,” as he was affectionately called, was my ceremonially adopted shi’náa’ii (big brother).

I was a groomsman in his wedding to Paula, in which my entire family participated, and our daughter Emily served as honorary ring-bearer. Alex, our son, and I rode with Albert in 14 consecutive Navajo Nation Fair parades.

Albert did the prayers when my wife Allison was sworn in as a state Supreme Court justice and a judge of the U.S. Court of Appeals for the 10th Circuit. He was the keynote speaker at my investiture as the U.S. attorney for the District of Colorado, and on and on, but mostly he was my brother whom I loved in good and bad times, at first-laugh ceremonies and ta’cheys, and the funerals of so many loved ones, including his beautiful mother from Klagetoh.

Allison and I went to bed Feb. 1, thinking Albert was finally rallying and talking about he and Paula’s planned trip to our home here in Morrison, Colorado, this spring.

Then a text from Paula at 5 a.m., saying he was declining. I went for my morning run. As the sun was rising, a ma’ii ran across the trail ahead, then sat down like a dog and stared at me. I stopped praying my beauty way prayer, sat down on the snow and cried.

Albert Hale has now begun his journey to the Spirit World.

I can’t begin to summarize his life or the sense of loss. I loved him and always will.

Yet I also know that so many of you are walking this same path with your loved ones, and that this is a mysterious, cruel, and unjust disease.

Bless yourselves and pray for your own families and friends. Pray that hó’zhó will be restored for all of us, on every level, and that we will never take anything or anyone for granted — not for one sacred moment — in this glittering world. I love you all. God bless the Great Navajo Nation.

We, the Indigenous Circle of Flagstaff — a Native American grassroots organization based in Kinlani with a largely Diné membership — are writing to express our concern about reports that women leaders of the Navajo Nation Council have been disrespected and cut-off during Council deliberations.

To be specific, on Sept. 3, 2020, Delegate Pernell Halona yelled at Delegate Eugenia Charles-Newton when she had the floor. Delegate Amber Crotty called a point of order on him.

Again, on Jan. 29, 2021, Halona yelled at Crotty when she had the floor. Charles-Newton called a point of order on him and had legal counsel read the rules of decorum to remind the speaker what options he had to address the matter.

We find these reports not only disturbing, but also in conflict with foundational Diné cultural values. As you must know, Diné people trace their origins to Asdzááá Nádlééhé (Changing Woman) from whom the first four Diné clans originated.

Our Diné oral histories and knowledge systems position the principles of kinship and relationship (K’é) as fundamental and paramount in our life work — in the hooghan and outside of it.

Respect is a core principle and expression of K’é and guides behavior, thoughts and attitudes that lend harmony. Respect is a way of treating another being or entity that does inflict violence or negativity.

Women have always played a vital role in Diné life. Our land, our homes (hooghan nimazi), our livestock and the earth itself have all been considered “mother” in Diné thought.

We trace our primary clan affiliation through the maternal line, and men traditionally lived in the homesteads of their wife’s clan.

In addition, women, as well as men, at one time were selected to be naat’áanii, traditional leaders.

Dorothy Denetsosie Gishie
(this letter was signed by 12 others)
Indigenous Circle of Flagstaff
Flagstaff, Ariz.

To the Navajo government: During this difficult time, please support the hataalii and other healers.

I have been trying to follow the news there and my understanding was at least as of Dec. 23 there was no care or support able to get to the hataalii and other healers.

Hataalii, these elders are like living gems, more precious than what is in Mother Earth. Hospital medicine is good, it saves lives, but it doesn’t have the living knowledge and the spiritual database that the healers have.

As others have said, when they leave this earth, their knowledge goes with them. This is a double loss. Supporting them now will benefit present and future generations 10 fold, more likely a 100 fold.