Nearly a third of promoted officers are women 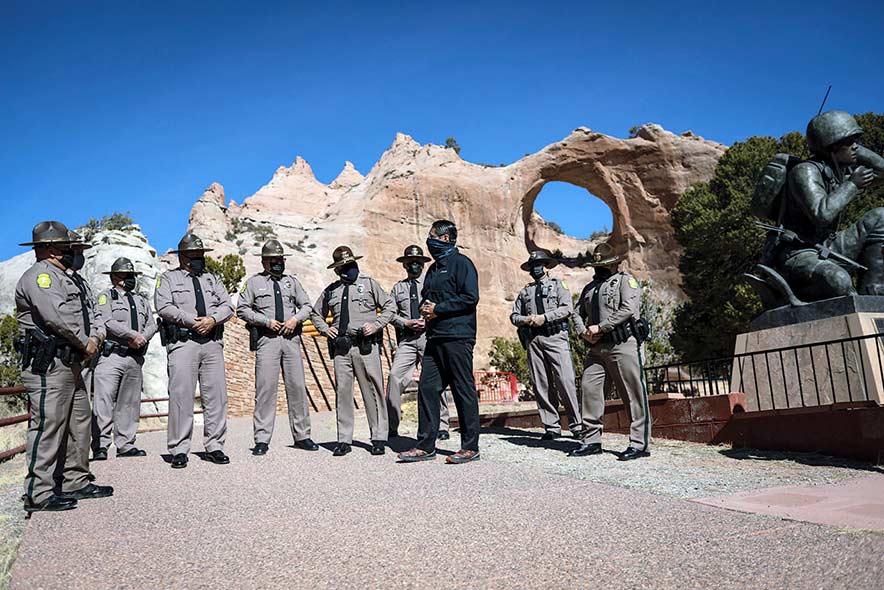 As Navajo Nation Police Sgt. Felicia Williams took part in celebrating her promotion to lieutenant Monday, she said her career choice was made because she wanted to emulate her grandfather, who served on the police force himself. For 20 years she served with the Navajo Nation Police in the patrol department.

In 2018 she made sergeant. Being promoted to lieutenant, she said, was a long time coming. “First it was my grandfather, he was in law enforcement, that is what brought me here,” said Williams. “Then there was a sense of me going into a different direction from what I was traditionally told I could be or go into.”

As for Shirley Sanisya, who also was being promoted to lieutenant, she said the position is a challenging one especially considering law enforcement is such a male-dominated field. Nationwide, only 12 percent of police officers are women. But she is excited for this new role she will be undertaking.

“It’s the challenge,” said Sanisya, who worked as a dispatcher before joining the police force as an officer in 1996. “Law enforcement is changing constantly.”

When it comes to women in law enforcement, Navajo Police Chief Phillip Francisco said the NNPD is unique compared to other departments because there is a higher ratio of women to male officers, and he wants that reflected in the upper echelons. “Not that we are giving special treatment to women, but they have the same equal ability and opportunity to move up,” said Francisco. “Female officers in the department have displayed those qualities which is why they are being moved up in positions of lieutenant and sergeant throughout the department.”

Francisco said women officers are needed in the department because of their unique skill sets and the abilities they bring to the job. Diversity throughout NNPD is a welcome feature. “We are looking to have that platform of officers who are able to see things in a different mindset, instead of the same old antiquated paramilitary organization that police across the country have been known to be,” said Francisco.

“Here on the Navajo Nation we are ahead of the curve of community policing,” he said. “We like to be reflective of the community.”

“It feels wonderful,” said Yazzie about being promoted to captain after 26 years with the Navajo Nation Police. “It’s been a goal of mine. I feel good that the leadership team has entrusted me enough to put me at this level.”

Like Williams, Sanisya and others who were promoted, Yazzie has been with the Navajo Nation Police for decades and stuck it out through the years when there wasn’t steady leadership.

Some of these promotions were a long time coming. “You worked very hard for this,” said Deputy Chief Daryl Noon to the newly promoted. “You are very deserving of it. This is a big vast area that we see and we need you to work together through me and chief to make things happen. There are a lot of people depending on us.”

The NNPD continues to strive to change and improve, in spite of some conflict with its oversight committee.