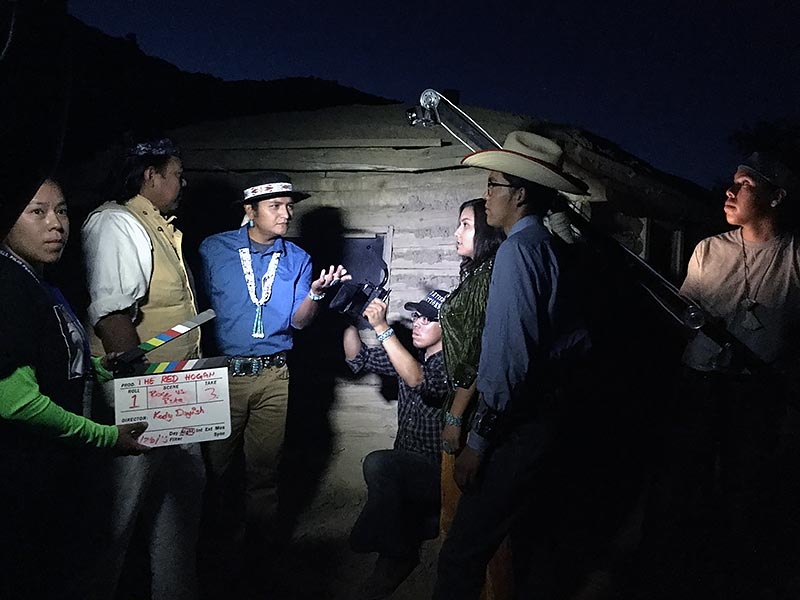 Seriously, who carries a harmonica on them?

The pocketknife made some sense, but the harmonica really got me laughing. I’m on the set of the “Red Hogan.” Kody Dayish, 28, has agreed that I can play a small part in the in-development horror film he hopes to take to Sundance this year.

In the film, a sheep-herding family with a teenage son heads into the mountain for their annual move.

“This time it’s going to be different because there’s something haunting this family,” Dayish said.

My background role puts me in the position of a bilagáana living near or in Shiprock in the 80s. The film takes place in that decade because that’s when the filmmakers’ elders experienced the stories they shared to create the foundation for the film.

“The ‘Red Hogan’ to me is the first Navajo story that’s true,” he said. “It’s as accurate as we can make it, and the best part about it is that we all worked together. We’re coming from nothing, basically, so the movie is a bunch of background actors I have met and built relationships with, ever since I have been on TV shows like Longmire or other random independent films that were coming through.”

After I finish eating a burger — no actual burger, sadly — and nod at the family next to me, I walk toward “my” truck, when a homeless man approaches. He asks for money. I say, “No.” I get in the truck and start to roll up the window when the actor pulls a pocketknife out.

He goes straight into salesman mode as he lists the features and benefits of that particular pocketknife, which sends me into hysterics. By the grace of the window going up quickly, the camera — I hope — doesn’t pick up my outburst.

OK, next take. He’s going to sell me the knife. I’m ready. I have been on film sets before, and I’m fine with repetition. Problem is this isn’t any other actor. It’s Ernest “Ernie” David Tsosie III, and he’s using two of his best talents — improv and comedy.

“Sir, you want to buy this harmonica,” he sets me up dead-to-rights for another laugh. I lose it.

Later on, I get a Facebook message from the director that I did a good job. What happened? Apparently, I got the window up quickly enough that no one saw me crack up laughing.

The second visit wasn’t as funny. The cast and all-Navajo crew created a scene up on the ridge out by the Shiprock with a lot more emotional weight and intensity. It wasn’t just the yells that come from up there that made it intense. It was the location. A recent tragedy that happened there impacted Dayish.

He said he saw the tragedy as a wound to the Shiprock and to the people who hold it sacred.

“In a way, I wanted to bring it back to show that there is still good in people,” Dayish said. “That’s why I chose to do that scene where I did.”

Except for a few bilagáanas in some of the roles, Dayish brought together a Native American cast to tell a Navajo story from a Navajo perspective with a Navajo landmark in the finale.

“There’s still good here, and the rock to me is a very sacred thing,” he said.

The actors said they could feel the power of the place and other places they experienced on the Navajo Nation throughout their time on Diné Bikéyah for the film.

Willy Runsabove, 62, Sicangu Lakota, said he met Dayish on the set of the Netflix series Longmire. He said the experience of shooting on the Navajo Nation gave him a sense of knowledge not just of the homeland but of the interconnected culture.

“The feeling that I have gotten from this is a very humble way of getting their culture, and knowing how they go about in dealing with life, and that’s very beautiful,” Runsabove said.

He noted that the production brought him to connect with the Dayish family as well as the culture.

“I really cherish my brother Dayish for having us and welcoming us toward their family,” he said. “Their mom and dad, their aunts and uncles, they all welcomed us. I can feel it in their heart. They were very, very interested to know who I am and where I am from. We’re from one world, but is seems like two worlds.”

His wife, Jill Kennon, 64, played a medical professional who interfered in a ceremony inside a hogan. Although her character didn’t get it, she understood the spiritual dimension of the hogan.

“I feel so humbled and privileged to have an insight into another world,” Kennon said.

Runsabove said playing a medicine man for the film felt intimidating and he described the supernatural aspects of the film as scary. He hinted at the reality of supernatural experiences as he spoke.

“It is kind of scary in my world of spirituality,” he said of stepping into the sacred role.

He said taking on the story and playing the role became important to him, because his role as an actor lets him break ground for younger Native American actors.

“The land that I come from used to be the capital of the Ute people — so a very spiritual area. The whole area is just really filled with that essence. Coming down here to Shiprock, it was the same, but different,” he said.

He said having Native Americans play Native Americans and especially having a Navajo filmmaker tell a Navajo story challenges the dominance of tokenism. He stressed the importance of the elder generation of actors in interaction with the younger generation to help each other, even in a system where people sometimes have to take roles rife with tokenistic overtones.

“I have the greatest respect for those guys — Wes Studi, Adam Beach, all those guys. They paved the way for the new generation,” he said. “I understand that. Hollywood gives you a little. A lot of the times you’re just a token. You’re a token character that comes into a movie, but what I’m trying to do, what we are trying to do, as the new generation of Native American actors and filmmakers in the entertainment industry is we’re trying to remove that token piece, and we’re trying to become the lead characters, the lead directors, the lead producers. We’re trying to become our own industry as opposed to just taking what we’re given.”