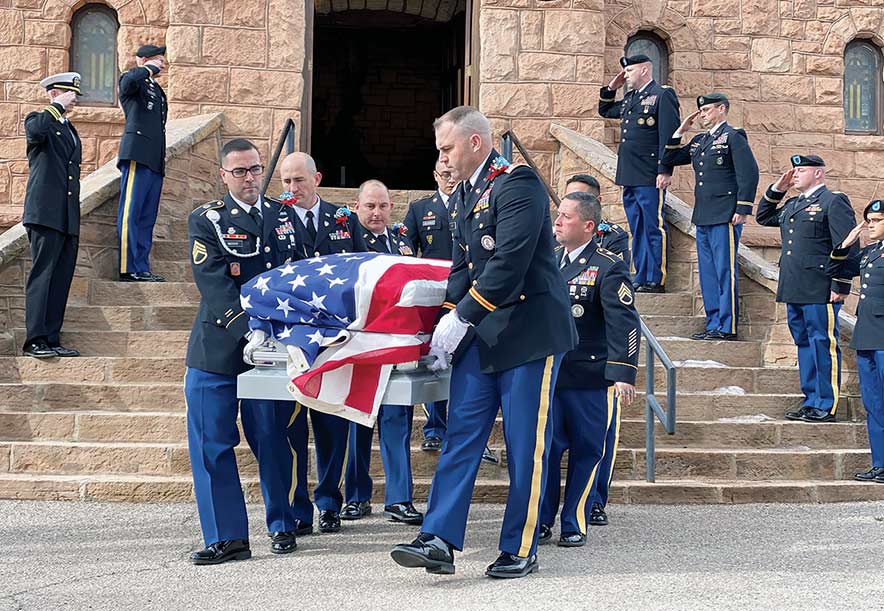 After 105 years of living and paving a path for her children and her grandchildren, Sophie Yazzie is leaving a trail of legacies in her wake.

Hundreds paid their respects on Wednesday morning at her funeral held at the St. Michaels Catholic Church in St. Michaels.

A group of National Guard from Arizona also arrived by helicopters to honor the Navajo matriarch. The guard members were dressed in their dress blues. 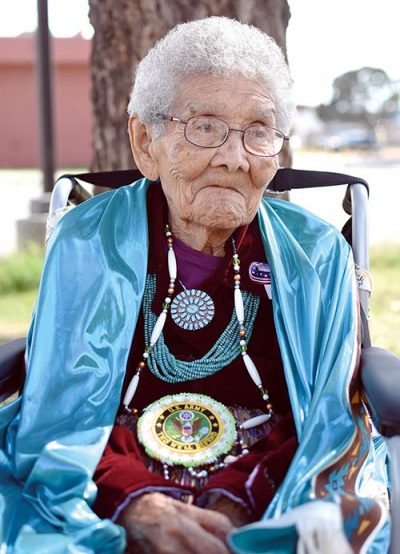 The World War II veteran, who tried to become a Code Talker for the Marine Corps, passed on of natural causes last Saturday in Tucson. Her daughter Jenny Yazzie, 69, spoke of her mom at a family gathering at the Wheatfields Chapter House on Monday night. She said she was going to follow her mom’s footsteps and have a good full life, too.

“I want to make sure I stay on the path,” Jenny said. “Even with raising children, she helped, she helped me with my two boys. They’re successful now.”

She attributed the success of her two successes to her mom’s lessons about life and coming home and herding sheep in Canyon de Chelly.

While one of her sons, Joachim Chino was a surgeon at the Tuba City Regional Health Care Corporation, her other son, who is currently enlisted in the Marine Corps, bought a flock of sheep because that was what his grandmother envisioned — to live and herd sheep in the canyon like she once did.

Sophie Yazzie, who was Kinyaa’áanii, was born in 1914. When she was born, she was named Awéé’ Yázhí.

She enlisted as Sophie Denet Bia in Santa Fe, New Mexico in 1943.

Before becoming the oldest veteran in the Arizona – and one of the top four oldest Native American veterans in the country – she grew up herding sheep and tending to the family’s crops in what she calls “the best place on the rez” — Canyon de Chelly.

During the winters, Yazzie lived at their home in Tsé Zhini, west of the Wheatfields Chapter House, herding sheep with her older sister.

Back then, she said, life was simpler.

“That was good enough with sheep and donkey,” Yazzie remembered. “Those (donkeys) are good animals. In the morning they’ll wait for you in the corral with the sheep. It’s nice to have sheep when you’re young. It’s nice to go wherever you want to go.”

In the summer, they took sheep to the summer sheep camp down in the canyon where they also planted a field of corn, squash, peaches and alfalfa on 14 acres of farmland.

“You wouldn’t find a Navajo girl in the rock,” she said. “That’s the best place on the rez to be Navajo.”

Yazzie graduated from Wingate Boarding School in 1934 with 12 girls and 22 boys.

She started work as a hostess at restaurants in Window Rock, traveling from Chinle. A war broke out in Europe five years after her high school graduation, but it was not until Dec. 7, 1941, that the U.S. declared war on Japan after the Japanese bombed Pearl Harbor.

Before the 1941 bombing, the Navajo Tribal Council passed a resolution on June 4, 1940 stating their loyalty to the United States. Yazzie continued working in the restaurant business as she and the rest of the tribe paid close attention to what Germany was doing on the other side of the world.

As the tribe continued pledging their allegiance to the U.S., like pledging to conserve food, and promising they’d fight alongside the country if they were needed, a Republican representative named Edith N. Rogers was on the other side of the country working on starting the country’s newest military branch: the Women’s Auxiliary Army Corps, which would eventually convert to the Women’s Army Corps.

Prior to the formation of the WAAC, Yazzie had already tried enlisting into the Marine Corps to become a code talker. She was denied. Yazzie continued working as a cook and hostess in Gallup.

In in 1943, she was looking for another job and asked her K’éts’ósí if the Marines were looking for Navajo women. Johnny Manuelito told her the “Navajo” Marine Corps was not. Manuelito would eventually become a Navajo Code Talker, one of the “Original 29.”

Manuelito told her she should try the WAAC, a branch of the U.S. Army.

On Jan. 22, 1943, Yazzie, then 28, traveled to Santa Fe and enlisted. After being sworn in with the Christian hymn “Rock of Ages” playing in the background, she was shipped off to Daytona Beach, Florida, where she completed basic training.

After boot camp, she learned she would be stationed at the now-closed Foster Air Force Base in Victoria, Texas, 120 miles west of Houston.

There, Tech 4 Sgt. Yazzie, making $78 a month, cooked for young aviation cadets who trained to become fighter pilots. The air base would eventually close in 1959.

After being honorably discharged, Yazzie met her soon-to-be husband, Jordan B. Yazzie, from Sweetwater, Arizona. Both worked at the Wingate Boarding School. She was a cook and he worked in the warehouse maintenance department.

On Oct. 27, 1945, they married and eventually had four children, two boys and two girls: Jenny Yazzie, Kathleen Yazzie-Lampert, George Yazzie and James Yazzie. Her sons passed on before her.

After 40 years, at the age of 70, Yazzie retired as a cook from the school. Instead of enjoying her time as a retiree, Kathleen said her mom went right back to work tending her field and growing crops in the canyon.

“She walked up and down the canyon like a mountain goat, carrying groceries and fruits,” she recalled. “You name it, she grew it down in her garden in the canyon. Hey, mom, what else did you grow in the canyon?”

“All kinds,” she answered during an interview in August 2019. “Alfalfa, peaches, squash, everything you can grow.”

After doing that for a few years, she realized age was catching up with her. Eventually, she permanently moved in with her second oldest child in Tucson.

While she missed home, she enjoyed doing crafts at the Tucson VA until her death Saturday.

In 2013 and 2014 she participated in the Coalition for American Indian Veterans of Southern Arizona. In 2014 she flew with World War II veterans to Washington, D.C. where she was inducted into the ‘Women in Military Service for America’ at the Women’s Memorial Library.

In 2016 she was the special guest in the commander’s tent at the Davis Monthan Air Force Base, and in 2015, 2016 and 2017 she was honored at the Iwo Jima Flag Raising parade in Sacaton, Arizona as the oldest World War II Veteran. She was the grand marshall in Sacaton and at the Navajo Nation Parade in 2017. Her military history is recorded in the Veterans Heritage Project, a book which records the lives of soldiers, ensuring that their stories live on for future generations.

“It is our honor to issue this proclamation to recognize the legacy of the late Sophie Yazzie, a matriarch for her family and a warrior for our Navajo people who served our country with great honor and dignity,” Nez was quoted in a statement.

The Speaker of the 24th Navajo Nation Council, Seth Damon, also expressed condolences on behalf of the council.

“On behalf of the 24th Navajo Nation Council, I wish to express the solemn observance of the passing of Miss Sophie Yazzie. It is with hearts full of deep regard for her service to our Nation that we recognize the true blessing her soul was to our people. May her legacy continue to be a guiding light of service, dedication, and the ultimate fulfillment of a life truly well-lived,” said Damon.