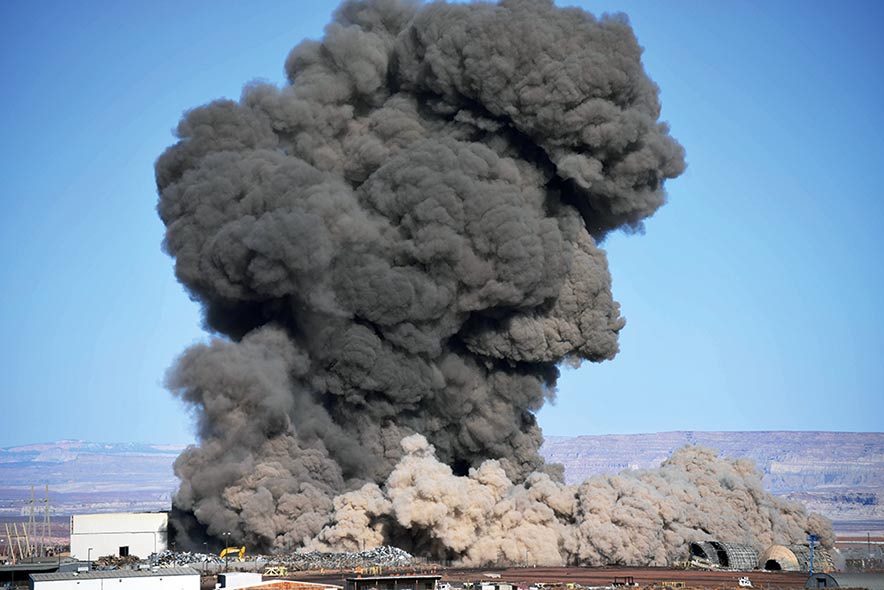 Contractors for Salt River Project successfully brought down the three boilers at the Navajo Generating Station using more than a thousand pounds of explosives.

Hardeen said each of the 200,000-ton boilers and support structures rolled to the ground in just 10 seconds following detonation.

Val Whitehorse, the O&M IV supervisor, was selected to detonate the charge.

The boiler demolition is the third of SRP’s continuing decommissioning of the power plant that ceased operation on Nov. 18, 2019. The plant’s three, 750-megawatt electric generating units – that produced up to 2,250 megawatts – were imploded on Dec. 18, 2020, and the electrostatic precipitators of Units 1 and 2 were demolished on Jan. 19. The Unit 3 precipitator was demolished when the stacks fell.

“For the past six weeks, they made more than 10,000 torch cuts,” Hardeen explained on Wednesday afternoon, “cutting the support beams and the hanger beams because these boilers are actually suspended. They’re big, huge units.” 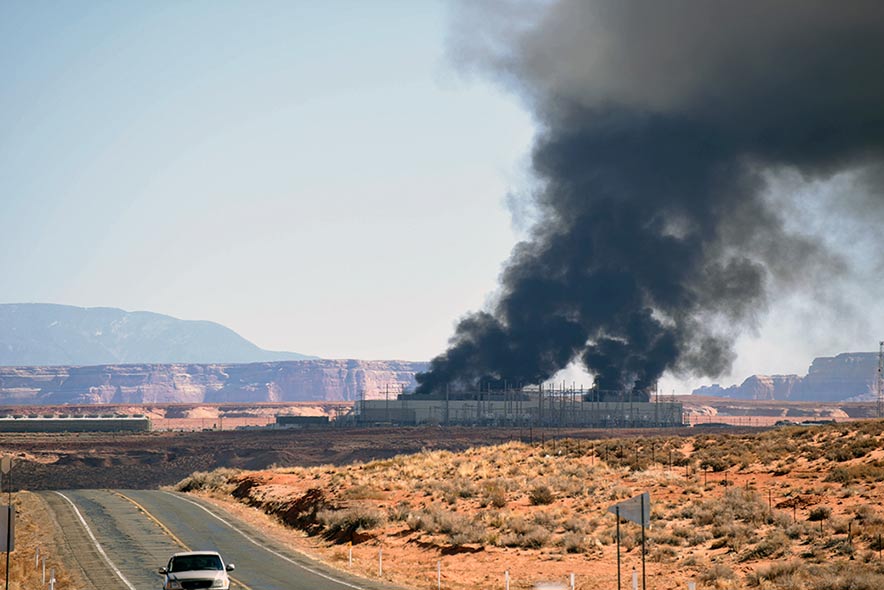 Special to the Times | Krista Allen
Black smoke from the dust coal rises from the Navajo Generating Station site on Wednesday morning when the three boilers for the old Units 1, 2, and 3, came down. At least two more demolition events will take place this year with the power block up for implosion next.

Hardeen added that the boilers’ many miles of water wall tubes made up the exterior walls of the furnace box and extended the entire height of the boiler walls.

With the exception of the supporting beams and sheet metal skin, the entirety of each boiler consisted of many banks of water wall, superheater and reheater tubes.

The demolition caused residual coal dust still contained in the boiler pipes to catch fire. Much of what was burning all morning is believed to be rubber from the plant’s coal conveyor belts.

The Page Fire Department was on the site to treat the fire with water but the flames were difficult to access.

“After more than 40 years of reliably converting water into very high-pressure steam for power generation, three of the largest boilers in the country have been laid to rest,” said Gary Barras, director of special projects for SRP.

Hardeen said this was the most complex demolition because of the amount and mass of the steel in the boilers, support columns and hanger beams – a combined weight of 65,000 tons.

Lemuel Brown, the O&M manager for NGS Site Services, who was selected to set off the charge for the demolition of the three units, said for the last 15 years of his career at the plant, he oversaw the coal handling system from when it was unloaded until it was blown into the boilers.

“To get a picture of the size of each of these boilers when inside, it was close to a regular full-size basketball court and about 180 feet tall,” said Brown, who’s originally from Kaibeto, Arizona.

Brown is currently supervising the project decommissioning for SRP.

Brown added: “I think of all the times we had to get inside to find a leak and do the repairs as safely and efficiently as we could. Sometimes I told my wife, (Lou), what we did. She’d cringe and say, ‘Are you crazy or what?’”