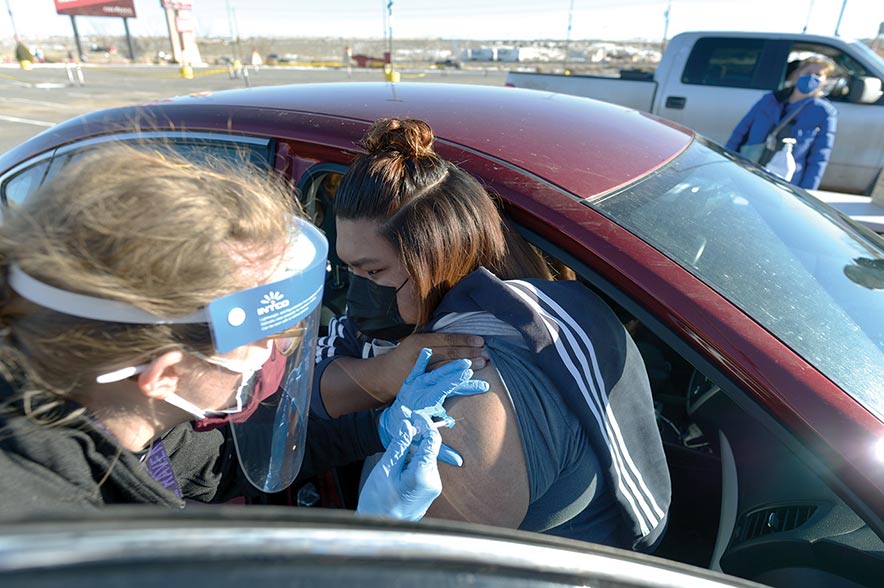 Navajo Times | Donovan Quintero
Gallup resident Erika Williams, 20, said she was getting the first dose of the Pfizer vaccine because she wants “to be on the safe side” on Feb. 19 during a vaccination event that was held at the Fire Rock Casino parking lot in Church Rock, N.M. Williams was one of more than 1,600 people to get vaccinations.

President Jonathan Nez proudly said last week that the Navajo Nation had exceeded its goal of administering 100,000 COVID-19 vaccine shots by end of February, crediting tireless health care workers who have been serving seven days a week to plan vaccinations and administer the vaccines.

On Tuesday, the president’s office reported that 135,161 COVID-19 vaccine shots have gone into arms on the Navajo Nation, which represents 92% of the total 146,980 doses received and includes 48,800 persons who have had their second shots.

This means that over 26% of the approximately 327,000 enrolled Navajos have gotten a shot through the Navajo Area Indian Health Service and tribal health care system, which is an amazing feat.

And as of March 2, 15.3% of the U.S. population had received at least one shot, with 76.9 million shots administered, including 25.4 million receiving the second dose. Approximately 1.8 million vaccines per day are being administered daily in the U.S.

So, percentage-wise, Navajo is outpacing both neighboring states and the general U.S. population.

On a Feb. 25 IHS media call, IHS Chief Medical Officer Rear Adm. Michael Toedt reported that as of Feb. 18 the IHS had also achieved its goal of administering 400,000 doses of COVID-19 vaccine “across IHS, tribal, and urban Indian Health programs,” representing 16% of the “target population,” with 6.3% receiving two doses.

“This milestone was reached ahead of schedule despite severe weather, making travel to health facilities difficult across much of Indian Country and leading to shipping delays,” said Toedt.

Toedt said most IHS facilities have now vaccinated the majority of their priority populations and are moving into Phase 2, which includes those who work in higher risk settings such as schools and prisons.

“Very shortly we expect that everyone who needs a vaccine will be able to receive it,” he said.

Toedt credited IHS and tribal health care employees across the country who are committed to ensuring the protection of tribal communities in 11 geographic areas covering 26 states and 349 health facilities, many in rural and remote locations.

“We have had an amazing partnership with our tribes to use all available resources to help with delivery of vaccine,” said Toedt.

This included distribution and redistribution of vaccines by ground and air transportation as needed.

Toedt said the IHS has also conducted over 2 million COVID-19 tests at a higher per capita than most states and is reporting a seven-day average test positivity rate of 4.5%, below the 5.6% all-races rate in the U.S., despite the fact that COVID-19 has had a disproportionate impact on American Indians/Alaska Natives.

Coordinated public relations campaigns in partnership with tribes have been key to the success of the vaccine rollout, said Toedt.

“This collaboration is one of the reasons we’ve been extremely successful,” said Christensen. “Honesty and transparency, developing that trust with the people you are serving is vital. We have spent a great deal of time on that relationship with our Navajo people to encourage them to be vaccinated.”

She said the communication process has been very unified across Navajo and with the president’s office, using social media, radio, and a bilingual approach.

“This is constant public education,” she said. “We encourage people in a very personal way that we would like them to be safe, keep their families, their communities safe. We feel very fortunate and grateful that our population has really stepped up.”

Toedt acknowledged there has been some vaccine hesitancy relating to how quickly the vaccines were developed and whether or not they are completely safe, which has made some people distrustful.

According to IHS Public Affairs Specialist Joshua Barnett, a recent IHS-funded survey by the Urban Indian Health Institute reported that 75% of Native Americans were willing to get a vaccine and 74% believe that doing so is their responsibility to help protect their community.

“I’m confident that the process for vaccine development has the full integrity and completeness of time necessary to make sure these vaccines are safe, but it’s our job as healthcare providers to communicate that in a way that’s acceptable and trusted by our population,’ said Toedt. “We know our efforts are working and we’re seeing good delivery and acceptance of these vaccines in our communities.”

Christensen said one of the strongest assets in the Navajo vaccination campaign has been the collaboration between public health nurses and community health representatives in reaching out to community members at the local level, including homebound elders and persons with disabilities.

“These are the people out in the rural areas that know the families, that know the homes,” said Christensen. “We rely on them for that person-to-person contact out in the communities.”
She said between 4,000 to 5,000 homebound individuals have actually been vaccinated at home or close to home.

Moving forward with the goal of getting the Navajo population vaccinated and achieving “community immunity,” Navajo Area IHS wants to make sure that all 27,000 square miles of the Nation have been penetrated, said Christensen.

“We want to be able to target any communities, populations or subgroups that have perhaps maybe not been able to get vaccinations,” she said. “So, our first step is to heat-map our whole area and then focus on those populations that are perhaps more rural or don’t have easy access to healthcare facilities.”

“Our goal is to get every single person vaccinated and to keep our populations in Arizona, New Mexico and Utah safe,” she said.

Christensen said her team will be working with chapters to identify anyone who might have been missed.

They have also reached out to Navajos living off reservation and have established an online registry to help people find a place to get their vaccination.

“We highly encourage them to come back if they need to and we will certainly take care of them and their families,” she said.

In regard to surveillance for COVID-19 variants, Toedt said IHS does contribute its tests to state public health labs as well as different large lab corporations such as TriCore, LabCorp. and additional processes for genomic testing are in development.

“The samples that are included through those mechanisms are sampled through the CDC’s processes to test for genomics,” said Toedt.

“In the meantime, we are participating in testing both in New Mexico and Arizona,” said Christensen.

Christensen said the Navajo Epidemiology Center has also reached out to bordering states requesting any relevant information on variants be shared.

“We all stand by ready to support this process and we are hopeful that we will have more specific information for Navajo Nation very soon,” she said.

Christensen confirmed that she was not aware of any variants having been identified on the Navajo Nation from random sampling.

“We have requested that information but we have not received it as of yet,” she said.

Any adverse events, or serious side effects, related to vaccinations within IHS are collected and reported to the same CDC system that collects the data nationally, said Toedt, but the data broken down by individual tribes is not publicly available.

“We are part of that Vaccine Adverse Event Reporting System through the CDC,” said Toedt. “All adverse drug reactions are investigated by the CDC to determine what category it goes in and how they analyze data.”

Navajo Area is gathering information on any adverse events on the Navajo Nation, but there are patient privacy issues when it comes to sharing that publicly, said Christensen.

“We do, as (health care) institutions across Navajo Nation, share basic data with each other when we’re doing best practices,” she said.

Christensen would not answer whether or not there had been any adverse events on the Nation.

“I will say we have done very well with these vaccines,” she said. “There are certainly side effects which have been well defined, but we’ve had minimal significant adverse events. I cannot quantify that for you, but we are tracking those events across Navajo Nation.”

As far as keeping everyone safe after being vaccinated, Toedt said it’s still important to continue to wash your hands, stay six feet apart and to wear a mask.

This is because vaccinated persons can theoretically still contract COVID-19 and spread it after being vaccinated, although they may not have any symptoms due to protection from the vaccine.

There are also still many unknowns related to COVID-19 variants and to what extent they may evade vaccine protection, be more transmissible, or cause more serious disease.

“We have been trying to report on possible variants most recently, explaining that we don’t have all the information yet on what the long term effects of those variants are,” said Christensen. “So we highly suggest that you still watch your distance, wash your hands and wear your mask.”

Christensen said public messaging encouraging everyone to abide by the public health protocols in place, regardless of vaccination status, will continue until there is community immunity.