‘Where the fire started’: 65-year-old sheepherder evacuates with herd 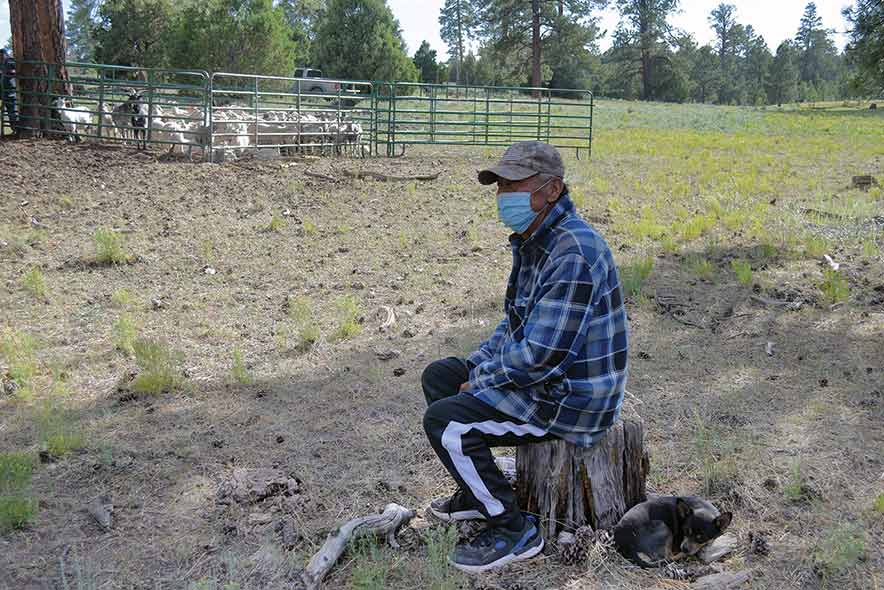 Navajo Times | Donovan Quintero
Nelson Benally sits with his flock Sunday before being evacuated from his sheep camp.

Nelson Benally, 65, who was evacuated from his summer sheep camp on Monday, said he saw the lightning that started the Wood Springs 2 fire.

He was at his camp on Saturday when it began sprinkling. At the same time, he heard a loud thunder crack through the Defiance Plateau forest. A bright flash of lighting hit the earth.

Soon it began to smolder. “That’s where the fire started,” he said in Navajo. He said he saw wildland fire fighters arrive seemingly in no time and work on putting out the fire. He went back to herding his flock.

On Sunday, Benally thought fire crews extinguished the fire because he didn’t see any smoke. He went about his chores thinking nothing more of it. By the afternoon, he looked toward where he saw the lighting strike, he said, and saw rising black smoke billowing into the air. It was getting large.

“Now it seems bad,” he said. Benally’s sister, Mary Blackmountain from Kinlichee, said when she saw the fire start again, she became concerned for her little brother and knew she had to go check on him, especially after her nephew told her he was being stubborn about evacuating. So they got ready and took water. “We hauled water for his sheep and goats at midnight,” Blackmountain said, referring to early Monday morning.

In the morning, she got news again he still was saying no to leaving. She went to him, she said. “‘You can’t stay there,’ I told him,” she said. “Then the ranger told us we needed to leave, so we just just started herding the sheep.” The family had already taken most of the flock away by horse trailer. One more flock of about 30 stood in a small makeshift coral. Smoke could be seen from the direction Blackmountain said her brother’s summer home was.

Benally said Navajo Rangers reached his campsite and said he needed to evacuate by about 1 p.m. He wasn’t about to leave his more than 160 head of sheep and goats behind. Rangers hurriedly helped him herd them along Navajo Route 26, which connects Chinle to Sawmill, Ariz. They then chased his herd south onto Navajo Route 7, which connects back to State Highway 264. His sister and the family corralled the large flock and began loading them into horse trailers.

A small flock remained as they waited for the trailers to arrive to pick up the rest. Benally sat on a wood stump. He said he was concerned his hogan and campsite he’s been going to since 1972 may have been destroyed by the fire. The area he lives in is rich with grass, enough to sustain his flock. The 60 hotshots and the 10 aerial firefighters were no match for Sunday’s and Monday’s winds.

The BIA’s initial 60-acre burn estimate was obviously no longer correct as trees could be seen lighting like match sticks one after another on Sunday. On Monday morning, fire officials said the fire had burned approximately 3,000 acres. By the end of the day, they said the fire had consumed nearly 6,000 acres. The fire that originated about three miles east of Wood Springs was moving in a northeasterly direction. It jumped Navajo Route 26 and is threatening to cross Navajo Route 7.

As for Benally and his 160-plus sheep and goats, he said if the fire didn’t destroy their home, he will return when the fire is extinguished. For now, they will have to wait it out in Kinlichee at his sister’s house. “We will see how it goes. I might have to rebuild again if the fire took it,” Benally said.