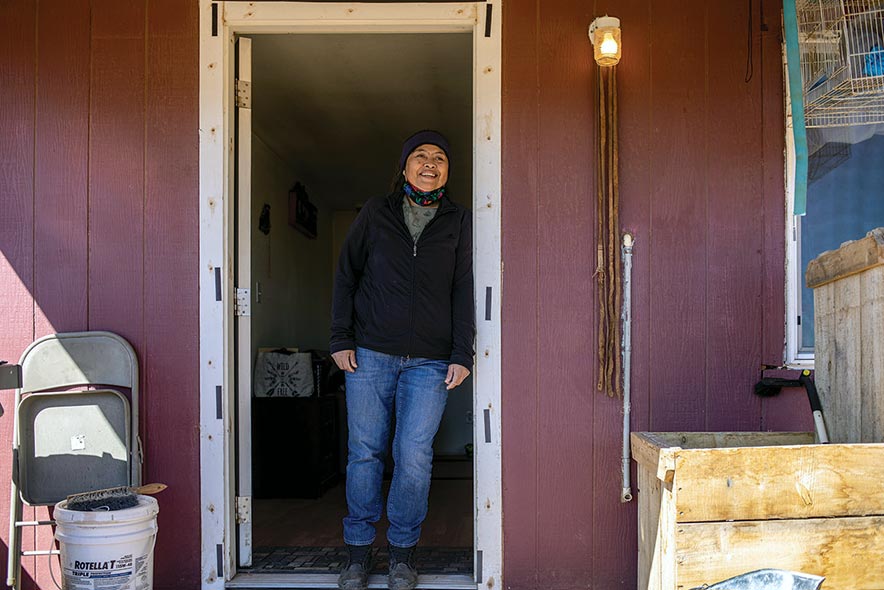 Charlene White turned her front porch light on for the first time ever Tuesday as Navajo Tribal Utility Authority representatives and President Jonathan Nez looked on and applauded.

The road to White’s home is like other dirt roads that stretch for miles off of Highway 264. Her home is also similar to thousands of Diné households, including her neighbors’ on the same road, that don’t have electricity.

But on Tuesday morning White and a few of her neighbors were given what they consider a luxury, and what others see as a basic human right: electricity.

“I’m proud. I feel good about this,” said White as she stood on her porch. She explained that she’s been using a generator to power her house.

For White, her neighbor Lawrence Descheenie’s younger sister, and six others that were hooked up that day, getting this electricity came at a heavy price. It was made possible by the $714 million Navajo Nation CARES Act funding given to the Navajo Nation to go toward mitigation of COVID-19.

Of this, NTUA was given approximately $147 million; however, $34 million of that was reverted to the Hardship Assistance Program when, in spite of working nights and weekends to expand the grid, NTUA leadership realized they wouldn’t make the Dec. 31 deadline to spend the money.

Although eight families received electricity hookups that day, four others were still going through the process before they could be hooked up.

“This will be, I think, the last of the many projects that we did with the CARES Act funding,” said Art Blacksheep, NTUA Fort Defiance District electric superintendent.

“Navajo people, we are transitioning into this modern way of living,” he said. “To see electric power in your house, it feels good, (especially) when you don’t have to go out and strike a match to light up your kerosene lamp. I’m happy for these Navajo families.”

After lawmakers took a while to decide how to spend the dollars, it allowed a tiny window for NTUA to get everything that was expected of it done before having to revert funds to the Hardship Assistance fund.

That meant Blacksheep’s crew, and other NTUA workers across the Navajo Nation, had to put in 10-hour workdays during the pandemic. At times they were delayed because of inclement weather.

“We kept up with what we needed to do,” said Blacksheep. “NTUA has their guidelines for the virus that we have to really abide by … that made it possible for us to go through this pandemic with these projects. We tried to really stay safe and to have enough guys to do the projects that we have.” 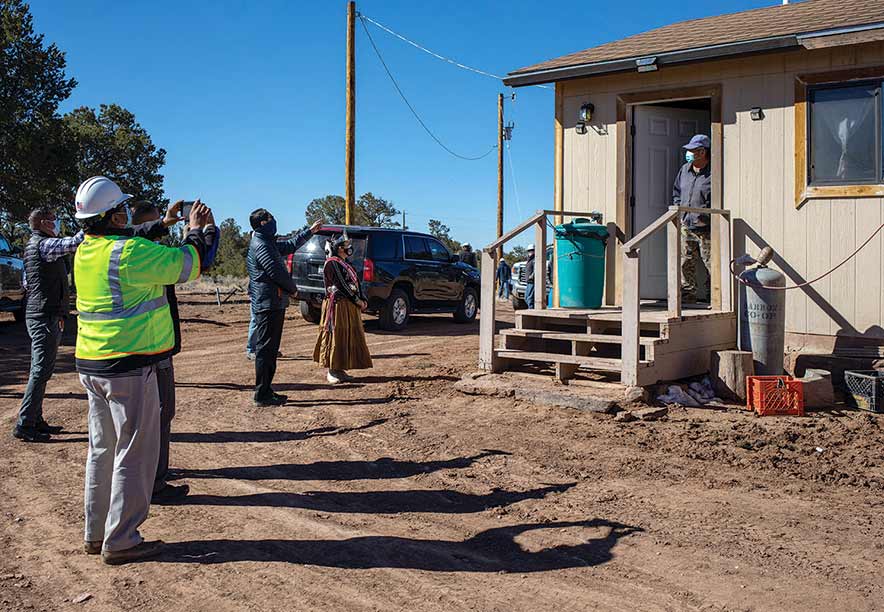 Lawrence Descheenie’s sister was at work so like a reliable older brother he made sure to meet Nez and NTUA crews at his sister’s house in order for them to turn on her electricity.
It was the same home they were raised in and through a homemade solar system they were able to get a semblance of electricity, but now they have the real deal.

“We’ve been living in the dark ever since we were raised here,” said Lawrence. “We got used to it. When they turned on the solar it was kind of dim … but now it’s going to be bright.”
Everyone on the Navajo Nation has been deeply impacted by COVID-19. White she said she was exposed to the virus.

Lawrence Descheenie said he and his family have taken all public health precautions such as washing hands, social distancing and wearing masks.

Since his sister works at Sage Memorial Hospital, she tells him of all the people they know who have COVID-19 or have died from it.

“This pandemic exposed all the needs across the reservation,” said Descheenie. “The electricity, and then there’s the need for the water line.”

Regarding vaccinations on the Navajo Nation, 146,980 doses have been received, total shot into arms is 135,161 and the number of people who have received both doses is 48,800. That’s 85% of the reservation population having received at least one dose, five times the figure for the rest of the country.

“I know there has been a lot of effort into putting these (electrical) projects together and we want to thank the local crew,” said Nez during his weekly town hall. He was also at some of the homes to witness them get electricity for the first time.

“What a blessing it is to finally get electricity to some of these rural homes,” said Nez. “This is your CARES Act funds being utilized for a permanent project that will be here for many years to come.”

Miss Navajo Nation Shaandiin Parrish also witnessed homeowners receiving electricity for the first time. She said to this day her grandparents and great-grandmother still live without electricity and this has taught many of the importance of patience and understanding.

But when homes finally get this basic necessity, it’s “a step into 2021,” she said.

“That is a tremendous feat for our people,” said Parrish. “But it also makes us realize where we stand on a global scale. I hope this is a testimony to our people’s patience, perseverance and resilience.

“This is also a testament to the rest of the country about how we can lower our numbers of COVID-19,” she added.

“We can still continue to strive 150-plus years after our treaty,” she said. “We are still here. It’s an emotional and inspiring event to be a part of.”