The Utah Supreme Court tossed out a lawsuit Sept. 30 filed by a Republican candidate trying to overturn the victory of a Navajo commissioner in a county dogged by allegations of discrimination against Navajo voters. 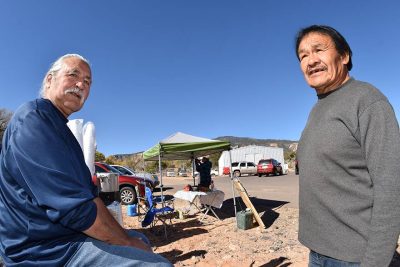 Special to the Times|Krista Allen
Willie Grayeyes, left, talks to Paul Smallcanyon after he voted at Naatsis’aan Chapter Tuesday. Grayeyes won a seat on the San Juan County (Utah) Commission.

Kelly Laws filed a lawsuit in January 2019, after losing the race to Democrat Willie Grayeyes in San Juan County. He claimed that Grayeyes was not truly a Utah resident, but the high court ruled Laws did not have standing to challenge his victory.

County officials had tried to remove Grayeyes from the ballot before the election for the same reason, saying an investigation sparked by a complaint from a different Republican hopeful found that he lives primarily over the nearby Arizona border.

A federal judge reversed that decision after deciding the county clerk falsified the complaint by improperly backdating it. U.S. District Judge David Nuffer did not rule directly on the residency issue, however.

Grayeyes has called the residency question a political attack as Navajos were poised to form a majority of the three-person commission for the first time.

He has been registered to vote in San Juan County since he was 18 and held leadership positions in Utah for decades, his lawyers have said.

The riders are expected to arrive at Rehoboth after 2 pm. Riders can join the ride at exchange areas along the route, where water will be provided for horses.

All riders can join at the Fire Rock Casino exchange area to ride the final 1.8 miles together.

WINDOW ROCK– On Monday, the Navajo Department of Health issued a health advisory notice to 35 chapters due to the uncontrolled spread of COVID-19 based on cases from Sept. 17 to Sept. 30.