Virtual Race Across Diné Bikéyah had pros and cons

Race Across Diné Bikeyah was the latest virtual race to wrap up so far this year. 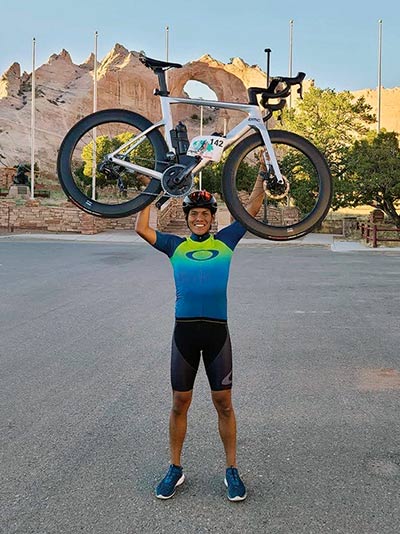 Submitted
Brandon Benally finished first overall in the Ride Across Diné Bikeyah, a virtual race sponsored by the NavajoYES organization. The virtual race was held from Aug. 6 to Aug. 15.

With the coronavirus pandemic hampering activities in Arizona, sponsor NavajoYES has been forced to think outside the box and that resulted in the virtual race.

RAD is a 350-mile race where competitors had from June 1 until Aug. 15 to complete the run. They could run anywhere and at any time as long as they reached the desired mileage of each segment of the race. There was also Ride Across Diné Bikeyah for cyclists where they had to ride the same number of miles, but in nine days, from Aug. 6 to Aug. 15.

Brandon Benally competed in both at the same time. The father of four came in third overall and third in the men’s RAD. He also came in first in Ride Across Diné Bikeyah.

“I guest the biggest reason why I did the cycling,” Brandon said, “was just because I wanted to show people that it was possible.”

Brandon’s goal in life is to promote health on the reservation; he is pursuing his master’s of public administration, he participates in health care administration, helps out with the hospitals and does cycling on the side for nonprofits like NavajoYES. Their mission is to get the whole reservation up and walking, biking, running and other various activities, something Brandon appreciates very much. A lot of times he helps promote their mission by making videos of him cycling across the Navajo Nation and posting them online.

“I just do it for the heck of it because I think it’s awesome,” Brandon said with a laugh.

He has been running since high school, probably 10 years now, he said. He picked up cycling five years ago but only started competing in the event two years previously.

This is the first event he had taken part in in months and when he first heard about it, he considered both running and cycling to challenge himself physically and mentally. His wife, Shelby, encouraged him to try both the running and cycling race, since this might be his only chance to do both races as there might not be another virtual race like this again.

Which is likely, according to Rygie Bekay who is a part of the program staff with NavajoYES.

“RAD was only for 2020 this year and once everything gets started next year it will be live races again if things go well,” Bekay said.

Although virtual races have become invaluable during the pandemic, Bekay thinks it’s unlikely NavajoYES will continue hosting them once the pandemic ends. The virtual races offered a solution to the unique problem of the Navajo Nation’s lockdowns and social distancing precautions. Virtual races were the way NavajoYES was able to provide a challenge for runners without having to risk their health.

Shelby Benally, Brandon’s wife, usually runs alongside her husband, but not this time as they are expecting their fifth child. Shelby is also a part of health programs that assist Navajos with diabetes in living healthy lives. However, the virus has made this mission difficult to carry out.

“It really has affected with my work for sure because a lot of our activities were community-based,” Shelby said. “Because of the pandemic we had to learn new ways to work with everyone and encourage them, like this RAD program was awesome. And then they (NavajoYES) also did the Just Move it virtually which is is just amazing just because it made it so that people had something to look forward to … I’m just really amazed to how they thought of it because then it gives people a reason to get up and move instead of just sitting at home.”

Jennifer Zahne also ran in RAD and came in first in her age group, seventh female overall and nineteenth finisher overall. This was her first virtual race.

With the lockdowns happening at home and not feeling safe to travel, the RAD offered her an opportunity to challenge herself. She wasn’t too enthusiastic about running when she was younger, but then she tried a 5K race just to see if she could do it. Then it was a half marathon, then a full and finally an ultra. She and her husband try to find challenges and try to push one another to become better runners, which helped strengthen their resolve.

“Running has been in our marriage for a while and it’s something we enjoy to do together,” Jennifer said. “I definitely think it (RAD) really helps me personally just to keep me motivated and just to keep me at normal, as normal as possible with this pandemic. Because running does a lot for me not just physically but spiritually, mentally and emotionally.”

The only problem that the runners encountered was the lack of in-person competition. Not having another person to race against or to push yourself to beat was noticeable.

“Yeah, it’s definitely different,” Brandon said. “When you do the in-person racing on a bike, its more competitive. You actually have someone there with you that you’re competing against in person so when you do a lot of biking theres a lot of technique you have to do to out-bike the person you’re next to or group you’re against.”

The athletes also had to properly calculate how many miles they were going to run/bike each day in order to meet each desired stage of the race. For Brandon there were days when he would have to run in the mornings and bike in the evenings. But he persevered.

“I get a lot of inspiration from Navajo or Native American runners out there,” Brandon said. “I think that’s awesome, but I think it’s even more awesome to be a cyclist cause I think as a people we can do more and we’re good runners so we could be good cyclists and good climbers, we can be whatever we want to be in athletics or any other discipline.”

According to Bekay, hosting the virtual races was easier than setting up a regular one. There was no packet pickup, no vending, no crowds and no need to mark a route. They took pictures and videos to post online to help give people a visual of how far they run on a map; that took some time. The biggest problem they had was mailing the runners bibs, T-shirts and awards for completing the race. He assures that the packagers wore gloves and social-distanced from one another as they sent the prizes to all participating runners.

For NavajoYES, everything hinges on the daily fight against the virus. There’s room for more virtual races, but NavajoYES is on alert for any chance they have at hosting in-person events again. Should the tribe allow it, NavajoYES will be sure to follow guidelines to prevent the spread of the virus, such as spacing out crowds and requiring people to wear masks. For as useful as virtual races are, nothing beats interacting with other humans.

“Being outdoors is the main goal and that would be great to just have folks outside and the races on again,” Bekay said.

Information: For a list of winners, go to www.bikesignup.com/Race/Results/91662#resultSetld-209025;perpage:100