A self-taught Diné artist, Yazzie was raised by her grandmother and aunt, both renowned Navajo weavers.

Yazzie said, “I am proud to be a part of this initiative to support the Navajo MMDR movement. It is an honor to apply my art to such an important cause.”

Crotty said, “The Navajo Nation is deeply grateful for the support of Cellular One and Pendleton Woolen Mills. We can make real progress when enough families speak up, and community stakeholders come together.

“We can impact legislation and ensure collaboration between tribal and state law enforcement officers so there is greater cohesion for search efforts and justice is served for victims and their families,” she said.

According to the Missing and Murdered Indigenous Women and Girls report, the National Crime Information Center reports 5,712 cases of missing American Indian and Alaska Native women and girls. However, the U.S. Department of Justice’s missing person database only logged 116 cases.

Judd Hinkle, CEO of Cellular One, and John Bishop, CEO of Pendleton, joined the announcement of Yazzie’s commission.

In May, Crotty received the Eleanor E. Roehrig Advocate Award for being an outspoken champion for the Missing and Murdered Indigenous Women and Relatives movement, the elderly, young people, and the LGBTQ+ community.

WINDOW ROCK – On Tuesday, the speaker’s office said the Navajo Nation Council will issue a proclamation that designates the third week of June as Diné Pride Week.

This year’s theme is “Proud. Living Our Lives in Sacredness,” and a variety of events are set throughout this week.

Speaker Seth Damon said, “It is vital as five-fingered beings that we acknowledge the importance our LGBTQ+ relatives have had since time immemorial.

“The Navajo Nation has been at the forefront of fostering an all-around, inclusive society,” he said, “and through Delegate Slater and Delegate Brown’s legislation, we are able to educate and celebrate our people.”

Brown said, “Already, many of our LGBTQ+ relatives face harsh discrimination on and off the Navajo Nation which threatens the mental, physical, emotional, financial, and spiritual welfare of the individual.

“We must remember our grandparent’s teachings of k’é” he said, “and how to respect one another.”

The proclamation will be signed on Friday evening. Damon will receive the Legacy Award] and Slater will be given the Naat’áanii Honoree Award. 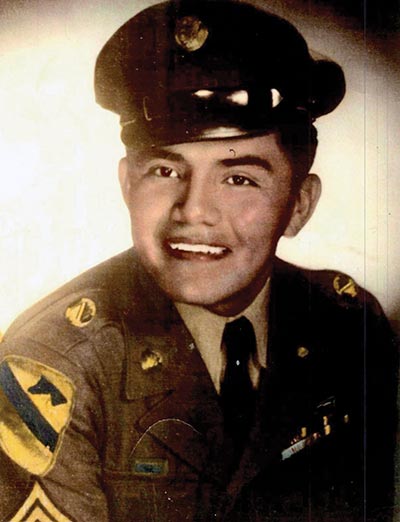 WINDOW ROCK – On Monday, the president’s office issued a proclamation in honor and remembrance of Diné Korean War veteran Harry John Nez, who passed away on June 10 at the age of 92.
Harry John Nez was originally from Tuba City.

Survivors include his wife, Roselyn Nez; his son, Calvin Nez; his daughter, Melvina John; and grandchildren and great-grandchildren.

The funeral service for Nez will be today at the Tuba City Full Gospel Church in Tuba City.

WASHINGTON – At a signing ceremony on Saturday in White Mesa, Utah, the Bureau of Land Management, the U.S. Forest Service and the five tribes of the Bears Ears Commission celebrated their partnership for co-management of the Bears Ears National Monument.

After signing the agreement, DOI reports, the parties travelled to Highway 261 to unveil the monument’s sign, which includes insignias of the Hopi Tribe, Navajo Nation, Ute Mountain Ute Tribe, Ute Indian Tribe of the Uintah and Ouray Reservation, and Zuni Pueblo.

BLM Director Tracy Stone-Manning said, “This is an important step as we move forward together to ensure that tribal expertise and traditional perspectives remain at the forefront of our joint decision-making for the Bears Ears National Monument.

Carleton Bowekaty, Bears Ears Commission co-chair and Lt. Governor of Zuni, said, “Today, instead of being removed from a landscape to make way for a public park, we are being invited back to our ancestral homelands to help repair them and plan for a resilient future.”

To support the work that the five tribes will perform, the BLM and U.S. Forest Service also announced that they will provide resources to each tribe through a separate process.

On Oct. 8, 2021, President Biden issued a proclamation, which restored the monument and recognized the importance of the tribes’ knowledge in managing the monument.

The BLM and the U.S. Forest Service will prepare a management plan for federal lands within the 1.36 million-acre boundaries of the monument working cooperatively with the tribes.

The monument has a rich cultural heritage and is sacred to many tribes who rely on the lands for traditional and ceremonial uses.

WINDOW ROCK – The top three violent crimes on the Navajo Nation are assault, assault with sexual abuse and murder, said Michael Henderson, director of the Department of Criminal Investigations.

And many of the crimes involve perpetrators under the influence of alcohol and other substances, Henderson said.

His comments came on Thursday in a meeting with David Gonzales, the U.S. Marshal for the District of Arizona, and U.S. Department of Justice and White House officials.

The meeting was held to discuss federal funding and violent crimes on the Nation.

President Jonathan Nez, who is running for re-election in this year’s race for Navajo Nation president, said he has signed off on extraditions to hold offenders accountable for alleged crimes and advocated for federal funds to build new public safety facilities in Shiprock and Window Rock.

Henderson also said that since the start of the COVID-19 pandemic, time and manpower were used to deal with deaths related to the illness.

The president’s office did not include any comments by the U.S. marshal or federal officials in its news release.

WINDOW ROCK – The U.S. Nuclear Regulatory Commission’s recently directed its staff to hold off on issuing a report that would allow contaminated uranium soil to be stored only one mile away from the Church Rock Mine site, according to the president’s office.

The Environmental Impact Statement and Safety Evaluation report would be the federal solution to the 1979 uranium waste spill, the largest in U.S. history, when tons of uranium and radioactive waste were released into the Red Water Pond Road community and flowed downstream to the Rio Puerco and areas where Navajo families have homes and ranches.

The contamination has caused devastating health and environmental impacts for the Navajo people.

Afterwards, at a meeting held in Gallup, Edith Hood, a member of the Red Water Pond Road Community Association, told federal officials about being diagnosed with cancer due to uranium exposure.

She recalled that as a child, she, along with family members, witnessed uranium mining but were never warned about the dangers or radiation and its health impacts.

Hood was one of dozens of elders who voiced frustration and concerns with the commission.

President Jonathan Nez, who is a candidate for re-election, said, “The directive from the Nuclear Regulatory Commission is a strong indication that they will reconsider and hopefully not allow the uranium mine waste to be stored just down the road from where our people live.”