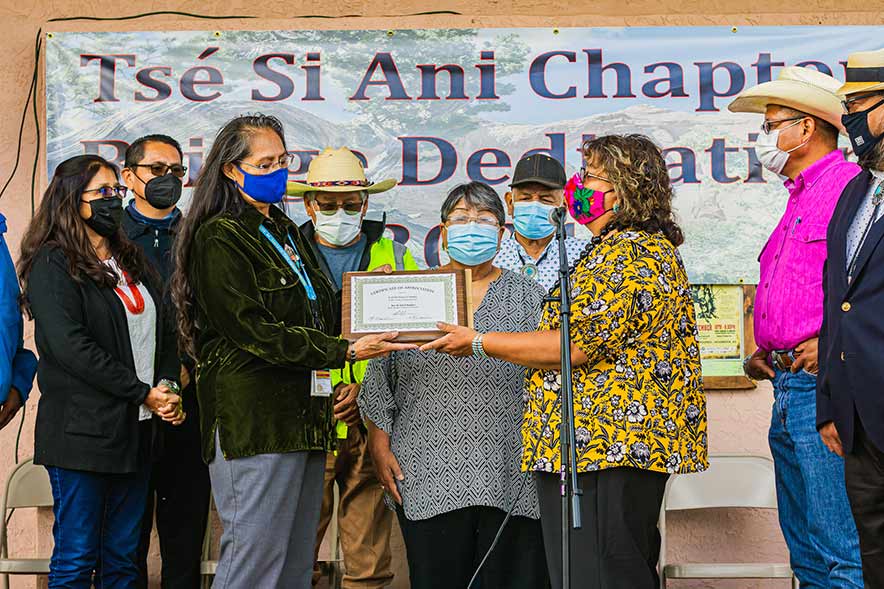 For the second time in three days, tribal officials on Friday held a ribbon-cutting ceremony for a new bridge at Manuelito Canyon.

This follows a ribbon-cutting on Sept. 1 for a new bridge at Lupton, Arizona, just downstream from Manuelito.

The new two-lane concrete bridge at Lupton on Navajo Route 9402, a main north-south crossing of the Rio Puerco wash, replaces the old, deteriorated wooden bridge that was built over 40 years ago.

In January 2020, the Navajo Division of Transportation successfully secured over $5 million from the Federal Highway Administration through the Tribal Transportation Bridge Program for the project.

But the funds were not immediately available so Lupton Chapter officials and Delegate Raymond Smith Jr. reached an agreement with Fort Defiance Chapter and Delegate Wilson Stewart Jr. to borrow funds allocated for a separate road project to allow construction to proceed.

Construction crews worked through the winter and completed the new bridge eight months ahead of schedule.

Lupton Chapter President Yvonne Murphy presented a certificate of appreciation to Fort Defiance Chapter for their collaboration. Smith thanked the Resources and Development Committee for its approval of the reallocation of funds.

Lupton Valley Church Pastor Ronnie Yazzie offered a blessing for the new bridge prior to the ribbon cutting.

At Manuelito, the previous bridge was washed out because of heavy rainfall in 2010, requiring many residents to find alternative routes.

Construction of the project began in December 2019 with a cost of $3.2 million from various funding sources including McKinley County, the state and the Navajo Nation’s roads funds.

Following the 2021 washout, Sen. Ben Ray Luján, D-N.M., hosted meetings with McKinley County, FEMA, the Navajo Nation, the Bureau of Indian Affairs, and the Department of Transportation to discuss repairing the bridge.

“Since the Manuelito Canyon Bridge was washed out, my office worked with state, tribal, and federal leaders to work together to reconstruct this bridge — a project a decade in the making,” Luján said. “Today, the bridge is now open!”

The ribbon cutting was hosted by McKinley County, in coordination with Manuelito Chapter, to offer appreciation to the Navajo Division of Transportation, Luján, New Mexico legislators, New Mexico Department of Transportation, and others who helped to secure the right-of-way approval and funding for the project.

TONALEA, Ariz. – On Saturday, elders and families of Tonalea-Red Lake, Arizona, celebrated as an agreement was signed between the Navajo Nation and Navajo Tribal Utility Authority to extend power lines to at least 23 homes in the community, according to a news release from the president’s office.

Tonalea resident Selena Slim said she has lived in Tonalea her entire life without electricity and spends $75 on a regular basis to purchase gasoline for a generator to provide electric power for her home.

She said when schools switched to virtual learning at the start of the coronavirus pandemic, she had to pay even more for gasoline to provide internet service for her children to do online studies.

Vircynthia Charley, Kayenta District manager for NTUA, said, “We heard and understand the struggle the families have been facing for all these years. Hearing this makes our commitment stronger to bring much-needed utility services to families without.”

Miss Navajo Nation Shaandiin Parrish said that the Tonalea signing ceremony would be her last official public event before the end of her reign. A new Miss Navajo will be crowned Saturday.
She recalled that her first official event as Miss Navajo Nation in 2019 was also in Tonalea for the approval of funding for a new chapter facility.

She thanked the local residents for their support and encouraged them to continue working toward more accomplishments for their community.

Walter Haase, general manager of NTUA, said, “We share in the excitement of the 23 families. We look forward to starting construction on this project to extend electricity to the families who have been waiting to enjoy the basic modern conveniences like refrigerated food, heating, air conditioning, including being able to recharge their mobile phones in the comfort of their own homes.”

President Jonathan Nez said, “I am excited to be here today with all of the leaders and families to move us another step forward to make this community stronger and to help build our Nation.”
In 2019, $3 million was OK’d for the design and construction of a new chapter house, which is near completion.

A proclamation naming the week of Sept. 5 to 11 as “Navajo Nation Suicide Prevention Week” was signed by President Jonathan Nez on Saturday, the president’s office reports.

The proclamation seeks to raise awareness of suicide and prevention to help people, including the younger generation, who are struggling.

Suicide is a major public concern and remains one of the leading causes of death on the Navajo Nation.

According to the Nation’s Division of Behavioral and Mental Health Services, suicide is the seventh leading cause of death on the Nation. Native American communities have higher rates of suicide compared to all other racial and ethnic groups in the country.

The proclamation states that all divisions, departments and programs will promote resiliency, culture, traditional values and faith and provide public education and direct services to reduce suicides on the Navajo Nation.

Nez said, “The COVID-19 pandemic may lead to higher rates of suicide due to many factors, but we have to remain strong for another and provide the support that our people need.”

“If you are struggling with depression or suicidal thoughts,” the news release said, “call the National Suicide Prevention Hotline at 800-273-8255 or contact the Navajo Nation Division of Behavioral and Mental Health Services.”