The $15 billion bipartisan state budget approved by the Arizona House and Senate June 23 contained long-needed infrastructure and social safety investments for the Navajo Nation and other tribal communities.

Included in the state budget are:

Hatathlie, Blackwater-Nygren and Tsosie in a statement said, “We prioritized infrastructure, shovel-ready projects, and programs that help those most in need.”

Some of these projects, they said, have been years in the making and benefitted from the work of previous state representatives and senators and are the result of advocacy by chapter and community leaders.

The three lawmakers added, “The Arizona State Legislature has historically overlooked tribal communities, we’ve seen our priorities pushed aside and overlooked, and were repeatedly told this was not the state’s jurisdiction. Now, we are writing a different history. Ahxé’éé.”

WINDOW ROCK – On Monday, based on cases from June 10 to June 23, the Navajo Department of Health issued a health advisory notice warning of the uncontrolled spread of COVID-19 to 63 of the 110 chapters. 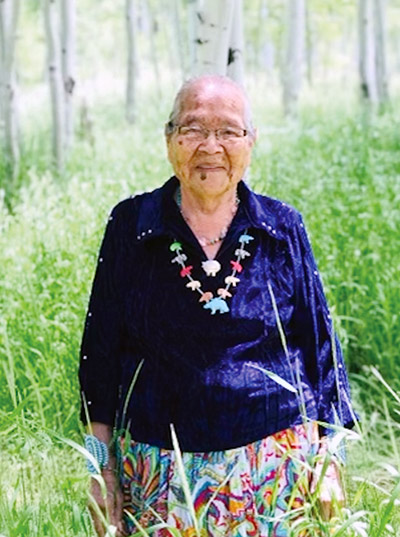 WINDOW ROCK – On Tuesday, the president’s office offered condolences to the family of Gold Star mother Ada Holly, who passed away at the age of 93 in Salt Lake City surrounded by family and friends.

She was originally from Montezuma Creek, Utah.

Her late son was U.S. Army Corp. David Howard Benallie, who served as an Army intelligence specialist in Vietnam from August to October, 1969.

In May of 2006, Ada Holly traveled to Washington, D.C., to visit the Gold Star Mother headquarters and committed to help all veterans on the Navajo Nation.

The funeral is today at the Holly family cemetery in Ratherford, south of Montezuma Creek.

WINDOW ROCK – On Tuesday in Gallup, U.S. Veterans Affairs Secretary Denis McDonough officially recognized the Navajo Veterans Administration as a tribal veteran service organization that meets the criteria and standards to be accredited under the Tribal Representation Expansion Program, to assist veterans with benefit and pension claims.

The Navajo Nation is the very first tribal nation to earn such recognition in the U.S.

Among many requirements that had to be met through the U.S. Veterans Affairs’ application process, under the leadership of Director James Zwierlein the Navajo VA had to demonstrate its capability, resources, and commitment to provide complete claims services to veterans.

Zwierlein reports that five staffers are accredited to process benefits claims for veterans. Since May 2, they have submitted 83 claims to the federal VA system.

In the past, Navajo veterans had to travel to VA centers located off the Navajo Nation to submit claims.

During the secretary’s visit, the federal VA announced that four outpatient clinics for veterans in Gallup, Las Vegas, Raton, and Española will remain open.

On March 14, these clinics had been recommended for closure by the Asset and Infrastructure Review Commission.

The tower will provide cell-phone and internet access for families, students and first responders in the region.

The celebration, hosted by Cellular One, started with a blessing by local Pastor Del Ray Yazzie.

Construction was completed this spring and the tower provides Cellular One phone service and will soon provide added services through AT&T and FirstNet.

DeGroat credited the late chapter vice president, Henry Thompson Begay, for having the vision that led to many improvements for the community.

WINDOW ROCK – The Navajo Department of Health and the Navajo Epidemiology Center on April 26 issued a notice of the first Hantavirus Pulmonary Syndrome case resulting in a death on the Navajo Nation.

The Nation and its public health partners have confirmed a Navajo Nation resident contracted the Hantavirus in mid-April in Apache County.

The rare but potentially fatal disease is spread by infected rodent droppings.

It is not known at this time where the individual contracted the virus. Deer mice are the most commonly infected rodent.

Hantavirus on the Navajo Nation can occur in all months of the year, but the greatest number of cases have been documented in the spring and summer months.

There is evidence that periods of high rain and snowfall are associated with increased cases.

The incubation period for developing symptoms after exposure can vary between 7 days and 3 weeks.

Once a person is infected, the illness begins with fever, headache and muscle aches. Further signs of developing HPS include chills, dizziness and abdominal problems such as diarrhea, nausea and vomiting.

Symptoms of Hantavirus can be much like COVID-19 or flu and only a medical exam and laboratory tests can help to tell the difference.

There is no vaccine or cure for Hantavirus, but steps can be taken to reduce the risk of getting the disease.

To prevent the virus, it is recommended to clean up mildly infested areas of rodent activity and to air out the area, among other precautions.

WASHINGTON— On Tuesday U.S. Rep. Melanie Stansbury, D-N.M., a member of the House Natural Resources Subcommittee for Indigenous Peoples of the United States, called on Congress to fully fund the construction backlog of Bureau of Indian Education schools during a committee hearing.

The oversight hearing, “Examining the Policies and Priorities of the Bureau of Indian Education,” was held jointly by the subcommittee and the House Committee on Education and Labor.

Currently, more than 85 of 183 BIE schools are rated in poor condition. The agency has estimated that more than $4.5 billion is needed to fix the construction backlog for K-12 facilities and an additional $3.27 billion for tribal colleges and universities.

Stansbury recently co-led a bipartisan letter to leadership of the House Appropriations Subcommittee on Interior, Environment, and Related Agencies urging the committee to build on the Biden-Harris administration’s Fiscal Year 2023 budget request to confront the issue.

WASHINGTON – The Department of Interior on June 24 released a list of covered programs included in President Biden’s Justice40 Initiative, according to an Interior news release.

Justice40 aims to deliver 40% of the overall benefits of climate, clean energy, and related investments to disadvantaged communities that are marginalized, overburdened and underserved.

There are 65 covered programs within Interior and 10 bureaus.

Interior Secretary Deb Haaland said, “From climate adaptation and the promise of clean energy to legacy pollution clean-up and clean water infrastructure, it is imperative that the Biden-Harris administration’s significant investments benefit historically disadvantaged communities, who for too long have borne the brunt of the climate crisis.”

In total, hundreds of federal programs representing billions of dollars in annual investments are being reimagined and transformed to maximize benefits to disadvantaged communities.