Chapters lose due to delays, restrictions on CARES Act funds 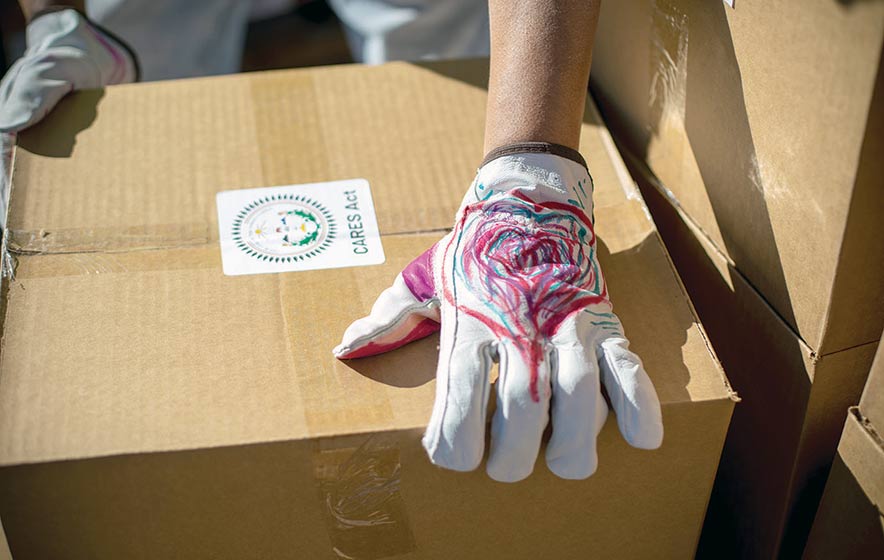 Navajo Times | Sharon Chischilly
A box of provisions is marked with a seal identifying it as having been purchased with CARES Act funds.

While $90 million was allocated to chapters in the Navajo CARES Fund Chapter Distribution Expenditure Plan to help cover a long list of COVID-19 relief items (outlined in Resolution CS-73-20), ultimately only $28 million was spent on essential food, personal protective equipment and sanitation supplies in a bulk order made through the controller’s office.

While many chapter officials and administrators are upset about the unfavorable outcome, Controller Pearline Kirk announced in a press release that the chapter expenditure program concluded successfully, despite the short timeframe to expend the funds since they were approved on Oct. 9.

Delegate Mark Freeland, sponsor of the bill, said it was unfortunate and disappointing that proposed chapter expenditures beyond the $28 million in food, PPE and sanitation supplies were denied. “Chapters are not happy,” said Freeland.

“They did the work that was asked of them and everything hit a roadblock. We got the rug pulled out from under us.” As of Nov. 20, the balance of all unspent, unobligated Navajo Coronavirus, Aid, Relief and Economic Security Act monies were supposed to be reverted to the Hardship Assistance Fund in accordance with a Naabik’iyati Committee directive (Resolution NABIO-49-20).

Per a Dec. 1 report from the controller’s office, a total of $308.6 million in Navajo CARES Act funds had been spent, with $120.8 million obligated (until Dec. 16) and $284.8 million unspent, which includes the $49.5 million currently in the Hardship Assistance Fund.

Kirk reported that nearly 5,500 individual requests for chapter expenditures were received by her office. “Most chapter expenditure requests were not allowed,” said Coalmine Canyon Chapter Vice President Phil Zahne. Kirk acknowledged that the short timeframe to spend the chapter funds caused “frustration and challenges” among several Navajo Nation divisions, departments and “some chapters.”

Despite the long hours and hard work that the chapters put into their plans, the controller’s office evidently ended up only approving and compiling chapter requests for essential food, PPE and sanitation supplies that will be delivered in 325 semi-truck loads in the coming weeks.

“By using a bulk purchasing approach, not only was the Navajo Nation able to procure this large volume of high-demand items, the cost savings for the nation were 30% on average for many of the goods purchased,” said Kirk. However, not much else was said about all of the other expenditures that were not approved.

A request by the Navajo Times to the controller’s office for a detailed report on chapter expenditures was not responded to by press time Wednesday. Kirk did say that from the get-go, she advised the Division of Community Development, tasked to help administer the funds, that several items contained in the chapter community needs assessment were “problematic from a compliance perspective,” and set unrealistic expectations for chapters.

However, the resolution (CS-73-20), which chapters went by in their preparations, lists dozens of allowable expenses beyond food, PPE and sanitation supplies, that are “necessary and due to” the COVID-19 emergency. These include essential fuel sources, services such as solid waste removal, select infrastructure projects such as bathroom additions and water wells, heavy equipment such as backhoes, COVID-19 safety modifications for structures, utilities and funeral assistance, and more.

Kirk said several of the items listed as eligible in the initial legislation were determined to be unallowable due to “duplication of services” or because they could not be completed by Dec. 30, the final deadline to expend the CARES Act funds.

‘Essential’ to way of life

A public announcement on Facebook by Sanostee Chapter on Tuesday stated, “The request we made for our Chapter CARES Act allocation purchase for firewood, coal and stove pellets was DENIED,” indicating even basic requests for heating fuel expenditures were not accepted. Crownpoint Chapter President Rita Capitan said with the passage of CS-73-20, chapters thought they would finally be able to address community needs at the local level.

She said her chapter administrators worked hard on top of their regular duties to complete the community needs assessment.

“In the midst of the pandemic, they were expected to do all this work, at the same time dodging exposure to the virus,” she said. Capitan said that most of the expenditures turned in by Crownpoint were not approved. “The disapproved expenditures were said not to meet the guidelines,” she said. “This was upsetting, as we know from the local level, what was listed was essential according to the way of life in Navajoland. Our people live differently from other parts of the country.”

For example, Capitan said that water barrels, wood and hay are essential to that way of life. “As of now, we were told we are approved for only the PPE’s and food for our community,” she said. “We were disapproved for the main essentials.” Capitan said that had the chapters been included in the plans to expend the $714 million in CARES Act funds from the beginning, they could have done a lot more for their communities.

“If you really look at it, the funds were available in May 2020,” she said. “There was so much going back and forth as to how this money was to be used. All along, the chapters were not included in the plans, until October, thanks to Delegate Mark Freeland.”

In a Nov. 30 email to the Council and the president’s office, Eastern Agency Council officials urged leaders to draft emergency legislation to support their resolutions that propose the deadline for Chapter CARES Act expenditures be extended to Dec. 16 and expenditures be fast-tracked as emergency procurement.

They also requested chapter administrators and officials be granted hazard pay for their essential duties.

“Navajo chapters continue to voice the disappointment, frustration, and anger regarding the OOC’s management/administration of the Navajo CARES Fund including the recent ‘red’ denials of numerous Chapter CARES Fund expenditure requests,” states the email. “Time is of the essence – at this crucial moment, the Navajo Nation, our legislative and executive leadership must unite, stand as one, and speak with one voice…”

Delays in finalizing expenditure plans by the deadline of Oct. 30 and subsequent deadline extensions put all procurement and expenditures “at risk,” said Kirk, and made it “extremely difficult” for her office to work with chapters in finalizing their plans and necessary documents.

Furthermore, the process for reviewing and approving procurement transactions that includes the Department of Justice, the Office of Management and Budget, and the president’s office caused further delays, she said. “The Navajo Nation chapters have to adhere to the same requirements as all other recipients of CARES Act funding,” said Kirk. “If they do not, we, the Navajo Nation, have to pay the funds back to the U.S. Treasury. There were a lot of promises made that simply could not be kept. These are federal dollars, not general funds that can be spent with minimal restrictions.”

Freeland said among other things, the chapters lost out on 90 pieces of heavy equipment valued at $10 million, including road graders and backhoes for burials, sorely needed in this time of crisis.

“If the U.S. Treasury is so concerned about us ordering this equipment, they should come out and take a look at the condition of the roads that our people have to drive on,” said Freeland. “Accessibility is so important, especially this time of year.” Freeland said he had several calls about the chapter legislation with the controller and DCD before it was dropped, so in retrospect he doesn’t understand why expenses included in the legislation were allowed in the first place.

“I don’t blame the chapters for being upset because they did their due diligence, and I’m really proud of them for stepping up the way they did,” he said. “Eighty-nine million dollars worth of plans were submitted but we only ended up with 28 million.”

DCD Director Pearl Yellowman confirmed that the chapters did what was required and her team did their best to support the process to help spend the funds. She said the chapters went through multiple rounds of training and completed their expenditure plans in a very short timeframe, all while trying to stay safe as the process for the individual Hardship Assistance applications started and the U.S. election was happening.

Yellowman said ultimately the program stalled out in the approval process because many of the expenditures were deemed unallowable by the controller due to the restrictive procurement guidelines. She indicated there has to be a better way to support necessary purchases for the Nation in a state of emergency. “On top of fighting the virus, we’ve had to fight our own internal system,” she said.

Yellowman agreed that unfortunately the chapters didn’t get everything they needed, which impacts the entire Navajo Nation. On a positive note, Yellowman said that the data that was collected in the community assessments and expenditures plans provided very valuable information that will be helpful in the future.