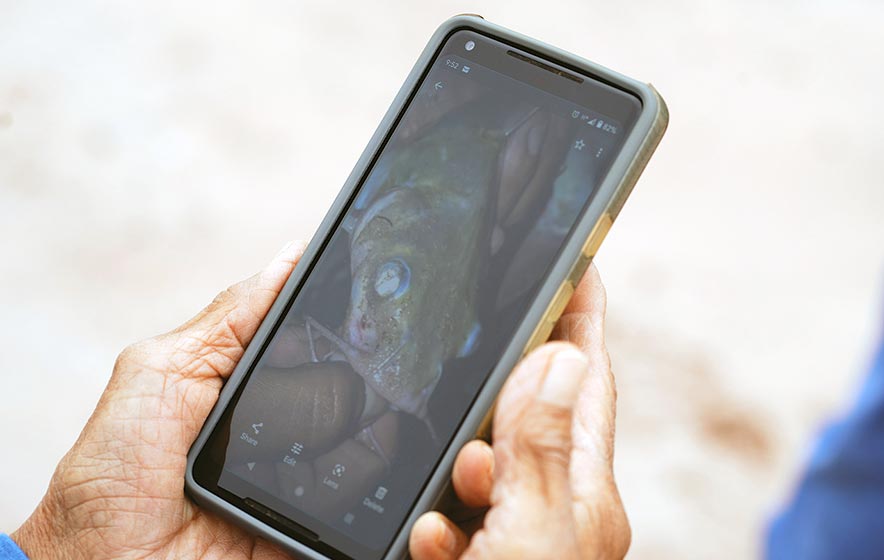 Navajo Times | Donovan Quintero
A photo of a catfish that appears to have cloudy eyes is shown on a cellphone Sept. 20, in Many Farms, Ariz.

The effects of climate change may finally be affecting the fish in Many Farms Lake, also known as To’ahidiilíinii.

It isn’t just the fish that Many Farms grazing official Roland Tso has noticed being impacted by the mega-drought that continues to devastate the Navajo Nation. He’s also noticed it in sand dunes that have been growing at an exponential rate in the small community known for its tasty kneel-down bread.

The lake is now a murky body of red water that has dried up at least twice within the last nine years. While Tso is powerless against the powers of Mother Nature, he said he wants Navajo Nation scientists to come to the lake and investigate what is happening to the catfish.

Tso showed Delegate Kee Allen Begay and Many Farms Chapter President Katherine Author photos on Sept. 20. He said the images were sent to him by fishermen who caught catfish with cloudy-looking eyes and what appeared to resemble injuries or open sores on their bodies.

Tso said seeing the images of the catfish does not appear to look like “normal” catfish.

“We have catfish that are not normal anymore. Some of them don’t have eyes,” Tso said on Sept. 20, near Many Farms Lake.

“We’re starting to affect the environment even down to the species that are in our lake,” Tso said. “This is the reason why we really need to fix it. My concerns are not just for farmers, the livestock, it’s also other species.” 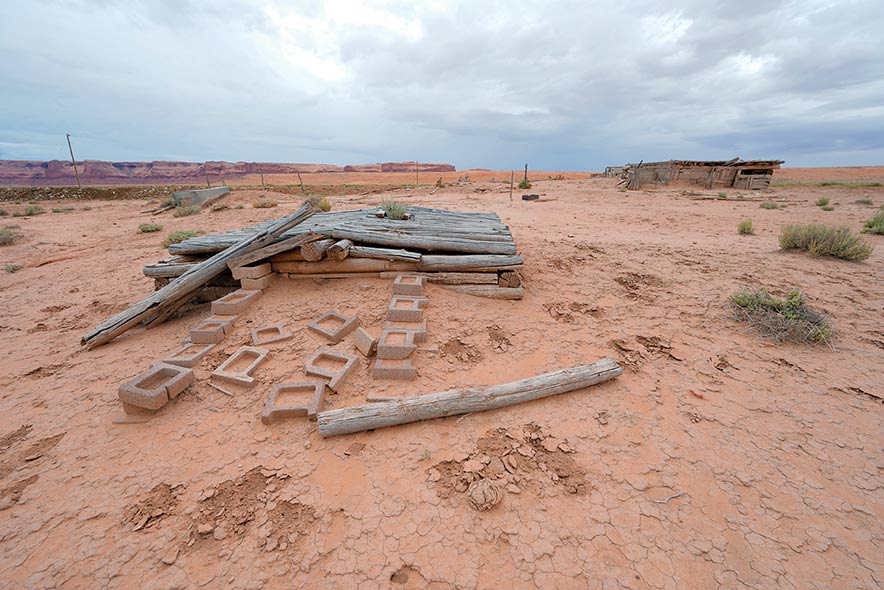 Navajo Times | Donovan Quintero
What was once a corral to house sheep with newborn lambs now sits covered with sand on Sept. 20, Wayne Harvey’s home in Many Farms, Ariz.

Tso did not know what could be injuring or possibly blinding the catfish in Many Farms Lake. Still, according to a paper titled “Concerns and Threats of Contamination of Aquatic Ecosystems,” published on the National Library of Medicine website, water contamination is the “outcome of human activities,” such as overusing pesticides, fertilizers, and sewage. Fluctuation in water that can impact the parameters of a body of water, such as drought, was another possible contributive factor. Poor water quality is another factor that can create an unhealthy environment for aquatic species.

Many Farms Lake is replenished by Jimson Weed Wash, Tezinie Wash, and Sheep Dip Creek. A diversion dam was built south of the lake to divert water from Black Mountain Wash, fed by flash floods during the monsoon season, into the lake.

While this year, the lake has been refilled by the monsoonal and intermittent water systems, the dry spells caused by a consistent mega-drought prevent the life-giving waters a chance to help the lake thrive.

Tso and many community elders have noticed that the once-drinkable lake no longer appears clean. Instead, they now only see their lake as looking dirty and unhealthy.

In 2013, the lake dried up as a baking sun sucked up the moisture, leaving only scorched ground in its wake. In 2021, the Council’s Resource and Development Committee, of which Begay is a committee member, toured the reservation and heard from community members across the reservation about how drought conditions were impacting them.

At the time of the tour, Many Farms Lake was completely dry, according to a 2021 report submitted by the RDC. Tso and Many Farms Chapter president Katherine Arthur expressed their concerns and advocated for better range management, downsizing livestock herds to give the land a chance to recharge itself naturally.

Ganado Lake, in 2021, was also on the verge of drying up when Begay and his colleagues visited.

The RDC heard from the Navajo Nation Department of Water Resources Carlee McClellan about how, due to drought, the lake’s recharging water system, Kinlichee Stream. It was predicted that the lake would dry up within a couple of weeks after the visit, and the lake did not dry up.

Tso showed Begay the catfish photos, who appeared shocked when he saw the images.

“I was talking about how we affected the entire eco cycle, the environment, and everything,” Tso said to Begay and Arthur. “Look at the fish that are in there; look at what’s wrong with the fish. This one has no eye. There’s another one.”

“Is this from Many Farms Lake?” Begay asked Tso.

“Yes,” Tso replied. “We got fish that people are taking out that’s got big holes on the side. We have no idea what’s going on. We need everybody involved, the biologists, everybody, agriculture, my side.”

“That is strange,” Arthur said. “Chemical of some sort, you suppose?”

Upstream, or “down” south of Many Farms – as some locals refer to Chinle, chapter president Rosanna Jumbo-Fitch said she’s been having issues with flash floods all year. 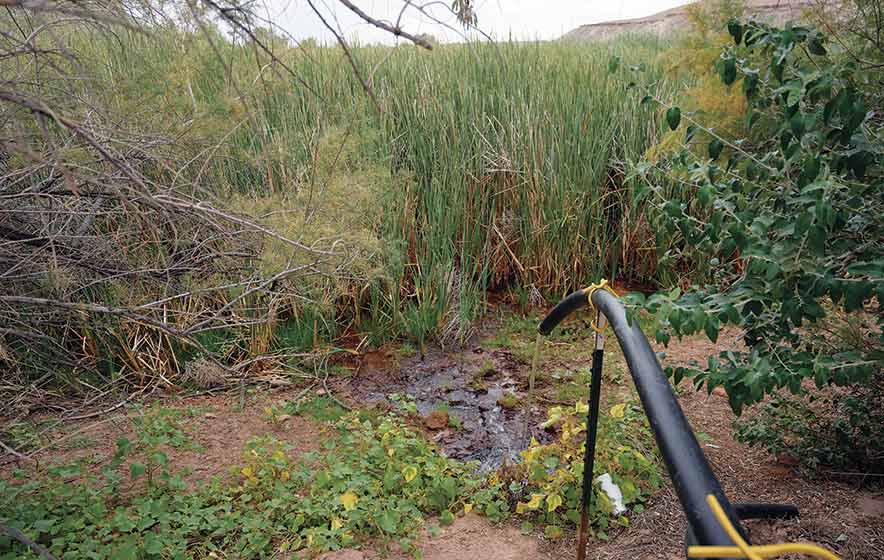 Navajo Times | Donovan Quintero
A hose connected to a groundwater source pours water into a pond where vegetation thrives in Many Farms, Ariz., Sept. 20.

According to a report by Jumbo-Fitch, eight flash floods occurred in the Chinle Valley area in 2022. She presented the report on Sept. 19, to a group from the U.S. Army Corps of Engineers. They were visiting sites of the reservation to get an assessment of drought impacts and also to help chapters develop plans for watershed protection programs.

Jumbo-Fitch, presented to the ACE to get design and engineering solutions that mitigate flood occurrences, overall protecting life, and property. Another goal of the chapter was to request protection from soil erosion, Jumbo-Fitch stated in her report.

The Chinle Chapter built a berm to prevent floods from damaging homes and threatening the lives of community members along the Chinle Wash.

Jumbo-Fitch said she told the Army Corps of Engineers they needed to make priorities for the tribe as emergency projects because of climate change and its environmental impacts.

“We showed them what we’ve been doing,” Jumbo-Fitch said, indicating she took the corps where the berms were located. “They got to get their eyes on it and see how we are in Chinle.”

Jumbo-Fitch hopes she can use the corps’ report to obtain funding for the chapter’s emergency watershed project. 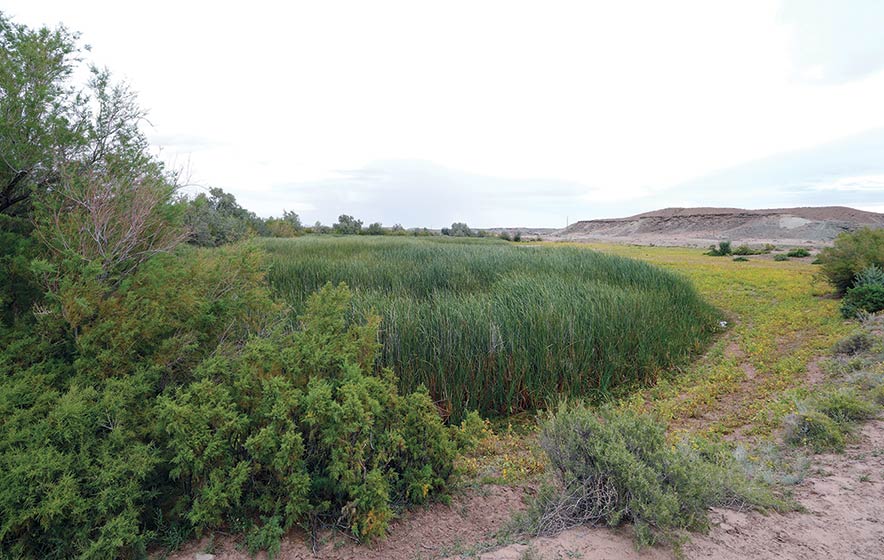 Navajo Times | Donovan Quintero
Tall reeds and other types of vegetation grow in a small pond in Many Farms, Ariz., Sept. 20.

Wayne Harvey, a military veteran, said he’s personally seen the side of mesa west of his home. which is located north of the chapter, turn into a sand dune.

“With the dust, the erosion, after a couple of days, the sand’s been blowing, the sand dunes move around,” Harvey said.

Harvey pointed to an area west of his residence and said sand dunes now occupy where shrubs and other desert-hardened vegetation can exist.

“All the sand is right in that area now. And pretty soon, that part is growing more,” Harvey said. I hope and wish the sand stays over there, but that sand starts covering up horse corrals.”

Harvey said the sand dunes have taken over several of their corrals, burying them with sand up to six or seven feet deep.

“At one time, there was a bid old sand dune in front of my house, and we had to move all of that,” he said.

Harvey remembers the giant sandstorms of 2010, when the relentless winds, aided by drought, threatened his family’s homestead. He remembered the sand drifts starting to pile up.

“So, every time we have rain, I’m thankful for that. It can wet down the ground, and on top of that, it’s more likely to keep the sand there when the vegetation grows,” Harvey said.

Harvey said his family members from all walks of religious faiths have recommended or prayed on his behalf to try and keep the sand dunes at bay.

“It doesn’t matter what your faith is,” he said.

Tso chimed in and said that when he talks about climate change, he says Mother Earth is sick.

“We have to come together. When your mom is sick, you, as siblings, come together and try to help your mom and pull her through. Well, we don’t work together. We need to understand that our Mother Earth is in dire need of that help. We gotta make sure we’re part of the fix instead of part of the problem,” Tso said.