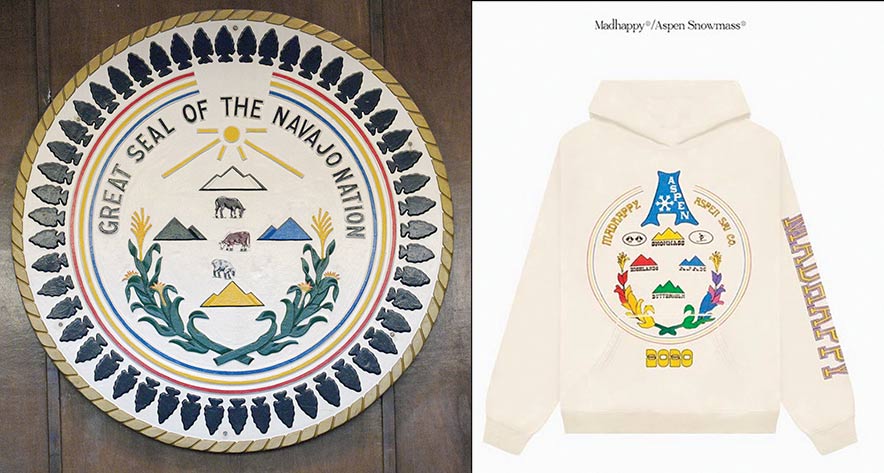 Navajo Times | Donovan Quintero
At least a dozen Navajos were struck by uncanny similarities between the Navajo Nation Seal, left, and the logo for Madhappy clothing company's new Aspen, Colorado, store (right, from the company's website), and posted complaints on their and the company's social media pages over the weekend.

After hearing from at least a dozen Navajos who felt the new logo for its Aspen, Colorado, store appropriated the Navajo Nation seal, clothing retailer Madhappy has apologized and offered to donate all proceeds from clothing bearing the design to the tribe.

JT Willie, executive director of the Nation’s Division of Economic Development, wrote in an email on Monday morning that he had spoken to Madhappy representatives after learning the company was possibly using the tribal seal without permission and selling it for a profit.

“Our conversation was positive,” Willie said. “(We) discussed how we can move forward in a collective manner to correct the misunderstanding of the design they have used.”

In an online apology letter Madhappy sent to Navajos who had questioned the design on social media, the company said the artwork for the “Madhappy Aspen/Snowmass” design had been “outsourced” and company higher-ups were unaware of its resemblance to the Navajo Nation seal.

“It was brought to our attention that artwork we used on a recent garment bore resemblance to the Navajo Nation Crest. We would like to take this time to offer our sincerest apologies to the Navajo Nation for any offense or distress that this may have caused,” the company statement read.

In addition to offering the proceeds from the apparel, the company offered to meet with tribal government personnel to develop cultural training for its employees.

Willie said that after their conversation, the tribe and the company might possibly work together.

“The owner will be submitting a letter of apology and a resolution to collaborate on a project together of this design or even the real tribal seal on their apparel,” he said.

The design no longer appears on the company’s website.

The Madhappy Aspen/Snowmass logo seems to combine designs from the tribal seal and the Navajo Nation flag. Madhappy’s design depicts four mountains, colored yellow, red, blue and green, encircled by a red, yellow and blue design. Underneath the four mountains are two floral designs. Each of the mountains bears the name of a ski mountain in Aspen, Colorado: Highlands, Buttermilk, Snowmass and Ajax.

Singer’s and Claw’s design has four mountains in the middle, with three lines — red, yellow, and blue — encircling two cornstalks, a horse, a cow and a sheep. A depiction of the sun and its rays is situated above. Outside of the three lines, that represent a rainbow, are 50 arrowheads, representing the 50 U.S. states. The four mountains within the tribal seal represent the four Diné sacred mountains: Sis Naajiní, Tsoodził, Dook’o’oosłííd, and Dibé Nitsaa.

Degroat’s flag design depicts the tribe’s major enterprises at the time — oil, gas, lumber, coal, and livestock— with an oil derrick shown in the middle that is similar in shape to a large “A” in the Madhappy design. Surrounding that are the four sacred mountains, and a rainbow.

After musician and record producer Dillon Francis was seen in a Madhappy sweatshirt with the Aspen logo recently, some Navajos were shocked at what seemed a blatant appropriation of their iconic symbols. Quite a few cried foul, posting pictures on their social media pages of the seal side by side with the Madhappy logo. One woman posted a comment about the design on every one of the company’s Facebook posts, demanding an apology and that the company discontinue marketing the design.

Back in 2012, the Navajo Nation filed a lawsuit against Urban Outfitters for trademark infringement. The tribe accused the retail company in U.S. District Court of New Mexico, saying it sold items labeled as “Navajo,” using Navajo designs. The store was selling clothing and jewelry at the time. The case was settled in 2016 between the retail company and the tribe.

“We are a proud nation with talented artisans, scientists, lawyers and professionals who together represent the Navajo Nation,” said then-Navajo President Russell Begaye. “We believe in protecting our Nation, our artisans, designs, prayers and way of life.”

The tribe did not say what the terms were in the settlement. The store’s attorney Azeez Hayne wrote in statement that Urban Outfitters took “the rights of artists and designers seriously,” and “has long been inspired by the style of Navajo and other American Indian artists.”

Begaye added in his statement that “any company considering the use of the Navajo name, or our designs or motifs, will ask us for our permission.”

The Navajo Times emailed Francis’s management asking why he chose to wear the shirt, and also emailed Madhappy, requesting additional comment about the apparel. Neither had responded by press time.