Navajo Tribal Utility Authority recently managed to get its debt ceiling increased by $1 billion, but during Friday’s Naabik’iyati’ Committee meeting the company was back to request $1 million from the Sihasin Fund to go toward rights-of-way and service line agreements for the second round of “Light Up Navajo.”

Although it’s been explained before that the $1.5 billion debt ceiling is needed to go toward long-term projects that NTUA plans to pursue or is currently pursing, delegates were dismayed that the company was back before them with a new request.

“We’ve got to say this elephant in the room, and that is you just got this approval by the Council to increase your debt ceiling,” said Delegate Amber Crotty during last Tuesday’s Budget and Finance Committee meeting, which was the first stop for NTUA’s request. “I was hoping not to see NTUA in front of me for many years.” 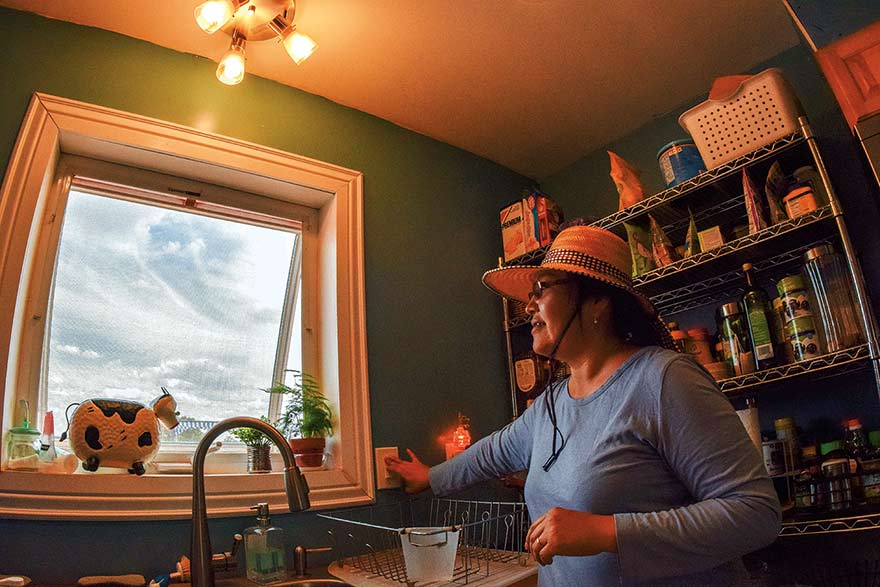 Special to the Times | Krista Allen
The lights come on for the first time in a home served by the “Light Up Navajo” project in May 2019.

Nevertheless B&F approved the bill 3-1 and when the legislation advanced to the Naabik’iyati’ Committee it was passed 13-1. Now it heads to Navajo Nation Council.

According to the bill, NTUA will use this $1 million to help with its “Light Up Navajo” Phase II goal of hooking up 300 homes to electricity, a higher goal than the 233 homes hooked up to electricity for Phase I last year.

In April through June, volunteers from across the country are expected to gather and construct power lines and install meters.

“Obtaining the proper surveys, easement, permits and clearances to connect a Navajo home to the electric grid is time-consuming and costly,” the bill states. “The fees for obtaining surveys, easements, permits and clearances are substantial. Therefore, the Nation finds that the allocation of $1million from the Sihasin to NTUA … is within the best interest of the Navajo Nation.”

Health, Education and Human Services Committee Vice Chair Carl Slater, who co-sponsored the bill, told the Budget and Finance Committee that until Navajo is able to develop a plan and figure out a better way to deal with rights-of way and easements, they “have to abide by federal law.”

“This funding is to pay for the consultants and performance work,” said Slater. “It’s not padding anyone’s pocket. It’s merely to ensure that this work is done by the book and it’s legal.”

Slater also said the last he checked, there was about $639 million in the Sihasin Fund and “$1 million is not going to make huge dent in that.” He also stated in this second round of Light Up Navajo NTUA was asked to focus on helping those who are disabled, and veterans.

“I understand under the 23rd Council there was a lot of praise,” said Crotty. “I understand there was an ask of NTUA on how we can do this more. I think this is a great model … I think it’s only scratching the surface, also.”

But, even if she sees the Light Up Navajo as a start of getting Navajo people electricity, she has concerns with how the Sihasin Fund is being used. When the Nation first received the $554 million court settlement that became the Sihasin Fund, there were public forums across Navajo where leaders listened to constituents and their suggestions of where the money should be invested. Crotty said she believes the principal should be going more toward infrastructure and capital outlay projects, as was suggested by the majority of forum participants.

“The Sihasin principal is the low-hanging fruit, so as delegates and leaders we are all looking at Sihasin on how to fund our unmet project needs,” said Crotty. “I need to go back and stand firm on the hearings … We have four areas and that’s how the legislation was developed … It talked about infrastructure, capital outlay projects, economic development and education.”

There are approximately 15,000 families on Navajo not connected to the electric grid. Over the last 11 years NTUA connected 5,213 homes to the grid, an average of 474 homes per year.

It could take up to 50 years to connect all these families’ homes to the electric grid and cost $1 billion, according to a letter to Council from Arash Moalemi, NTUA’s general counsel.

“NTUA is a not-for-profit consumer-owned utility,” stated Moalemi. “If NTUA borrows $1 billion and finances it over 40 years, even at zero percent interest, NTUA would have to raise their resident electric rates to over $6,000 per year per family. No one could afford these rates.”

In order to hook up more families without increasing the rates “Light Up Navajo” — which utilizes volunteer labor — would be the best option. The costs of researching and securing rights-of way, service line agreements, materials, equipment and accommodations averages about 51 percent of the total project cost.

“Assistance from Navajo Nation is needed to expand the amount of families from 233 to at least 300 families,” stated Moalemi. “This 67-home increase for LUN II will cost $350,000 and the remaining $650,000 will go toward an additional 67 homes for the future LUN III project.”