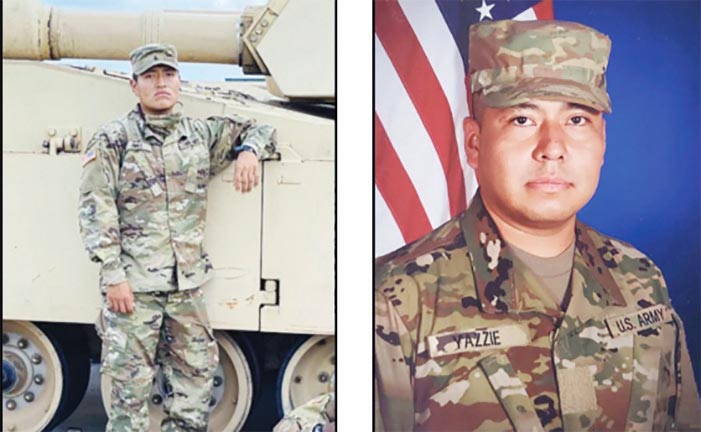 Submitted Pvt. Carlton Chee, left, and Spc. Miguel Yazzie died at Fort Hood Army Base in Texas within two months of each other. They were among 28 soldiers to die at the base this year.

As Congress was launching an investigation into the deaths of 28 soldiers at Foot Hood, Texas, including two Navajos, Speaker Seth Damon and Maj. Gen. John B. Richardson IV, acting senior commander of Fort Hood, held a teleconference Tuesday in which Damon said he was assured the deaths of the Diné soldiers would be investigated thoroughly.

According to a press release from Damon’s office, Richardson was directed by General Michael Garrett on Wednesday to take over as acting senior commander. Richardson told Damon three investigations will be conducted by both the independent Criminal Investigation Division and the unit’s investigators, Damon said in the release.

He also stated an independent autopsy will be conducted and the results shared with the next of kin.

President Jonathan Nez also called for an investigation into the deaths. Nez stated that the families of the two, Pvt. Carlton Chee of Pine Hill, New Mexico, and Spc. Miguel Yazzie of Window Rock, both suspect foul play may have been involved in the deaths of their loved ones.

“It is very troubling that while they are mourning the loss of their loved ones, they are not receiving adequate and timely factual information regarding the time leading up to their deaths,” Nez said.

The two are among 28 military men and women who lost their lives at Fort Hood this year. Chee collapsed during a training exercise on Aug. 28 and passed away in a hospital on Sept. 2, according to the release. Yazzie was hospitalized for a medical condition on July 2. He passed away the following day.

Chee’s family did not respond to a request for comment through their GoFundMe page for Chee’s funeral, but Yazzie’s father, Michael Yazzie, said he has long felt the Army was negligent in his son’s death. “How come they took him to an off-base hospital?” he asked. “They have a really nice facility on-base. Why didn’t they just take him there?”

He added that he talked to other soldiers, which led him to believe Miguel Yazzie was being targeted by his superiors. “There were some prior incidents,” he said, declining to elaborate. “He was denied certain things that he needed.”

Yazzie said he and two family members will be traveling to Arkansas to speak with someone who has knowledge of the incident. He said he “most definitely” supports the congressional inquiry.

“Our concern is not only for these two members of the Navajo Nation, but for the many Navajo men and women who are serving in every branch of the military around the world,” Lizer said in the press release. “As you know, the Navajo people have a long and proud history of serving in the Armed Forces at a higher per capita rate than any other demographic in the United States. “This is not only a call for a congressional inquiry, but it is a call for accountability and answers for the families that are grieving for their loved ones,” he said.

Damon said that for him, it’s personal. “I personally have my brother and two relatives that have served at Fort Hood,” he stated, stressing the importance of maintaining lines of communication between the families of Chee and Yazzie, as well as Navajo leadership.

Chee is survived by his parents, five sisters, his fiancé, and two sons. The family is requesting donations through their GoFundMe page to help with expenses. Click on the following link to access the donation website: https://www.gofundme.com/f/7y4w9-funeral?utm_source=customer&utm_medium=sms&utm_campaign=p_cp+share-sheet