A Navajo man living in Utah says his son, a Virginia National Guardsman who recently graduated from advanced infantry training at Fort Benning, Georgia, is being forced out of the Army in a bizarre incident of reverse racism. 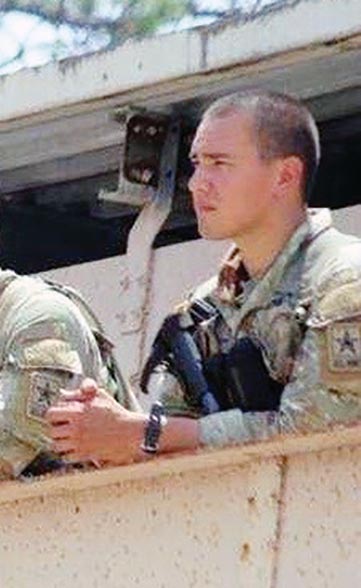 Courtesy photo | Brian Haskan
Pfc. Jason Haskan, Diné/Anglo, is being held at Fort Benning, Georgia after reporting an altercation between soldiers from his own and another platoon. A Black soldier is accusing Haskan of using racist language; Haskan denies it. Hassan’s father says he has been denied due process and the Army is trying to “chapter him out.”

Brian Haskan said his son, Jason Haskan, was completing training at Fort Benning on Aug. 1 when he and other members of his platoon were involved in an altercation with members of another platoon. Jason filed a report on the incident, naming the instigators, who he said were from the other platoon.

According to Brian (Jason is not being allowed to speak to anyone about the incident because of Army protocol), the men he accused — all of whom are people of color — have retaliated with a claim that Jason and another soldier used racist language during the confrontation.

The irony, his father says, is that Jason is also a minority. “If you look at him, he looks white,” said Brian, who is full-blooded Diné. “He’s six-foot-three and light-complected. But he speaks our language, loves visiting his great-grandma on the reservation and knows how to play the shoe game. He’s Navajo.”

Brian said Jason and the white soldier involved in the incident, Spc. Thomas Boone, were at first confined to the day room in their quarters and, after this reporter called the base to inquire about what happened, placed on staff duty answering the phone in their building, where they are constantly monitored. “He’s not being paid because his orders have ended,” Brian said. “He’s basically being held prisoner at Fort Benning.”

Brian said Jason had planned to start college this month. He already missed his sister’s wedding. Jason also says, according to Brian, that someone forged his signature on a counseling report that he refused to sign. He also believes some documents were backdated because he was not initially presented with them.

Brian said it appears Jason is being what is known in military circles as “chaptered out,” where a soldier’s superiors try to find a section of code that would justify kicking the soldier out of the Army. According to Brian, Jason is being considered for a Chapter 13 discharge, “unsatisfactory performance.” “But just a few days before this happened, he was recommended for Ranger training,” Brian said. “Why would they recommend him for Ranger training if he wasn’t a good soldier?”

A former military man himself, Brian says that unless they’ve drastically changed the process, what his son is going through is completely unorthodox. “I’ve gone through chaptering soldiers out before, and this is not the way the process is supposed to go,” he said. “They’re not following procedures. They haven’t even investigated his complaint. They just came back with this thing about him being a racist.”

Plus, the identity of the complainant is supposed to be kept confidential until the matter is dealt with, but one of Jason’s superiors leaked his name to the accused, Brian said, which allowed the other soldiers to conspire to formulate a complaint against Jason.

The public affairs office at Fort Benning referred this reporter to Sgt. Maj. Terry Pittman, the commanding sergeant major of Jason’s unit. Pittman said he doesn’t know Jason and is not familiar with the incident, which Brian called “a bald-faced lie.”

Brian Haskan said he has tried to talk to Jason’s superiors and they seem to be siding with the offenders. He had also called the Office of the Inspector General, but with all the racial sensitivity in the country right now, no one wants to touch Jason’s case with a 10-foot pole, he said. “Everyone’s afraid of Black Lives Matter,” he said.

A friend of his who is a retired military attorney even told him as much, he said. “He told me, ‘As far as they’re concerned, he’s a white guy making a complaint against a bunch of minorities,’” Brian recalled. “‘Nobody’s going to defend him.’”

Boone’s father, James Boone of Florida, agrees. “If that guy hadn’t knelt on George Floyd’s neck six months ago, this would have been handled differently,” he said. “As it is, they’re saying, ‘We have a racial incident here and the easiest thing we can do to cover our butts is just get these two men out of the Army.’”

James Boone said Thomas had also been recommended for Ranger training and in fact he was pulled out of the line for the bus to training and told he was “under investigation.”

However, according to James, he was never asked for his side of the story and he and Jason were not formally charged until last Friday. “After you’re charged, you’re supposed to be able to speak with legal counsel within 72 hours,” said James, a former law enforcement officer and Navy veteran. “Well here it is a week later and no one has come to talk to them.”

Both Jason and Thomas say multiple people witnessed the incident, which erupted when one of the men from the other platoon ground his heel into an insignia painted on the floor of Jason and Thomas’s platoon — a no-no in the Army, where such signs are to be respected.

“The guy was looking for a fight,” James explained. He added that such scuffles aren’t uncommon at training bases, where “you’ve got a lot of young guys, all trained to fight.”

Later, the instigator, who is Black, accused Jason and Thomas of “calling him a monkey and dropping the N-bomb,” James said. Both men deny using any kind of racial language, according to their fathers.

“My son has four people who have written statements on his behalf,” James said. Instead of being allowed to prove their case, the men’s fathers say, the two soldiers were given paperwork saying they would agree to be dismissed from the Army for “serious offenses.”

Like Jason, Thomas told his father the “I accept” box on the paperwork was already checked. “I think they just figured they had two young kids there who would sign anything they put in front of them,” James said.

Instead, they were dealing with young men from multi-generational military families. Brian and James both felt Fort Benning was throwing protocol out the window, and advised their sons to stand firm. “So, two months later, that’s where we are,” said James.

Both James and Brian have petitioned their respective U.S. senators — Marco Rubio, R-Florida, and Mike Lee, R-Utah, for a congressional inquiry into Fort Benning. Brian said he has been assigned a caseworker from Lee’s office; James has yet to hear from Rubio, but he started the paperwork later.

James admits it’s an extreme gesture, but “we’ve exhausted all our other avenues,” he said, noting that his son is “crushed.”

“He’s coming out of a five-generation military family, so joining the Army was a natural thing for him,” he said.

Brian is angry that his son, who has had to endure teasing as a “half-breed,” is now being accused of racism. “When I was in the military, I experienced racism from white people because I’m Native,” he said. “Now my son is experiencing racism from Black people because he’s white. It seems like us Native Americans are just always falling through the cracks.”