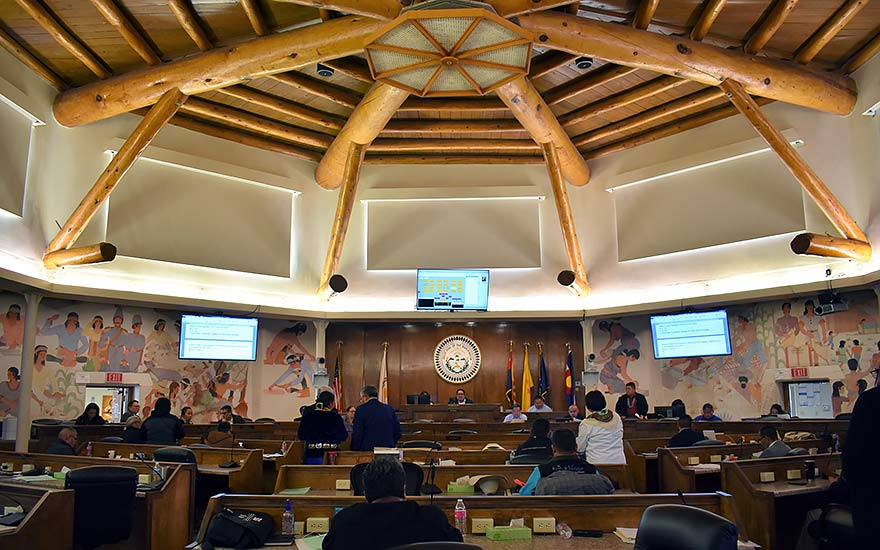 While Elmer Begay’s renewable energy bill died in the fall session, some were hopeful that a bill to create a Navajo Energy Office, sponsored by Delegate Rickie Nez, might still pass. But that was not the case.

Nez’s bill, which would have amended the 2013 Energy Policy to authorize the creation of the energy office within the Division of Natural Resources, was tabled at a meeting of the Navajo Nation Council last week.

“There are a lot of moving pieces with the new energy initiatives across the Navajo Nation,” stated Nez, who is also Resources and Development Committee chairman, as he introduced his bill.

Nez said he believed it might be beneficial to take up the energy office bill again after the Navajo Nation Energy Summit, which will be held in November or December and might yield other legislation as well.

However he qualified that by suggesting he was flexible.

“It is fine with me however way you would like to consider this legislation,” Nez said addressing fellow delegates.

RDC Vice Chairman Thomas Walker Jr. agreed and said he thought it was in the best interest of Council and stakeholders to wait until after the summit to “get more information” before making any more decisions concerning the nation’s energy policies or the proposed office.

Walker motioned to table the legislation until the winter session in January, which was quickly approved by the Council (16-4).

As it stands, the 2013 energy policy includes a mandate to establish an independent energy office that would serve as a clearinghouse for energy projects and development and be responsible for strategic planning for the future.

That office was never created, which is why the powers that be are still trying to do that now.

In fact, last fall, with the leadership of Division of Natural Resources Director Bidtah Becker, a bill to create the energy office was sponsored by delegates Alton Joe Shepherd and Olin Kieyoomia. It would have directed all energy-related Navajo Nation entities to work collaboratively with the energy office to “maximize the potential opportunities available from the Navajo Nation’s energy resources consistent with Navajo values.”

It made it all the way through the Naabik’iyaati’ Committee at the very end of December 2018, but was never voted on by the final authority, Council, in the year-end backlog so it expired.

With the Jonathan Nez-Myron Lizer administration’s Háyoołkááł Proclamation that was signed last April, the new administration prioritized reducing dependence on fossil fuels and introduced a new economic vision for the Navajo people through “healing the land, fostering clean energy development and providing leadership for the energy market.”

The proclamation also supports the formation of the energy office to oversee projects and development “for optimal gains.”

As an offshoot of the proclamation, President Jonathan Nez also formed the Háyoołkááł Work Group, made up of division directors and president’s office officials, to take on issues such as the creation of the energy office.

In a Sept. 17, 2019, report by Jonathan Nez to the Resources and Development Committee on energy development initiatives, the issue of the use of the 500 megawatts of transmission line capacity that will be transferred to the nation upon the closure of the Navajo Generating Station was also discussed. This has to be decided upon by Dec. 23.

“We need to move on it quickly and make a decision so that we can benefit from the 500 megawatts,” said Jonathan Nez. “That’s why we have the Háyoołkááł Work Group evaluating and vetting potential projects.”

But what about the energy office, which was supposed to serve as a clearinghouse for projects?

Jonathan Nez said while his administration continues to receive inquiries and proposals, the Háyoołkááł Work Group is not making any commitments or agreements yet.

A week before fall session in a work session, members of the Háyoołkááł Work Group had stressed the creation of the energy office was a real priority and that they had proposed energy projects that needed vetting.

“The creation of energy office within the Division of Natural Resources will offer a continuous flow for support projects on Navajo Nation,” said JT Willie, Division of Economic Development director.

Even though it hasn’t passed legislatively, approximately $664,000 has been allocated for the new energy office under DNR in the Navajo Nation 2020 comprehensive budget and the president’s office says it will contribute another $100,000.

In the meantime, with the tabling of the bill, the fate of the office once again hangs in the balance, as do energy projects coming to the Nation.

So, for the time being, if someone is a potential energy project developer for the Navajo Nation, who do you call?

The answer is still unclear.

However, Jared Touchin, communications director for president’s office, shared how they are handling inquiries.

Touchin confirmed that once the energy office is established it will serve as the clearinghouse for proposals.