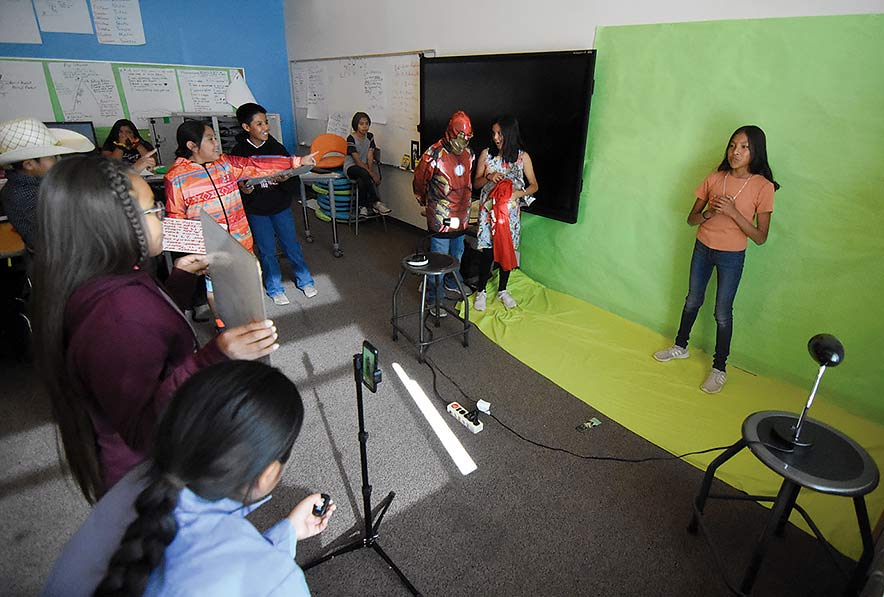 Karalenae Numkena is just 10 years old, but has already launched her career as a news anchor.

She speaks confidently into the recording iPhone used to shoot the weekly newscast at Tuba City Boarding School.

The phone is mounted on a $15 tripod and the greenscreen background was made using school butcher paper. The green fabric draped over the desk was left over from a Navajo ceremony.

The fifth-grade class uses a couple of small lamps to light the stage and dry-erase boards with script written on them as a teleprompter.

The production runs like a well-oiled machine and everyone clearly knows their role. It’s impressive to watch considering their teacher doesn’t do much besides reminding the director to count down and making sure the phone is recording.

Karalenae and her fellow classmates create a weekly newscast that gets shared on their school’s Facebook page.

“I think I could be a news reporter because it really inspires me from doing this,” Karalenae said.

She decided to try her hand at anchoring because she likes to talk.

“I just really like being out there,” Karalenae said. “I really like showing my expressions and how I feel.”

So this newscast was a great fit for her. Karalenae definitely feels comfortable in front of the camera with an ease that most adults don’t have.

“My favorite part is that I just like talking because that’s the most important,” she said. “I was kind of nervous but I got the hang of it.”

After a couple of takes, the students pick the best one to edit, then head to the iPad that is equipped with editing software. The kids huddle, pitching and zooming in to make sure the green screen matches up with the background they lay over it.

“I’ve learned about editing because Mr. Hosteen has been teaching us,” Karalenae said. “He really knows about technology and stuff. He showed us one time and it was real easy.”

This newscast is made so that parents of Tuba City Boarding School know the goings-on at the school. Leslie Hosteen Jr., Karalenae’s teacher, noticed low parent involvement at school events. Hosteen figured it was because parents weren’t getting the announcements and emails the school sends out.

“They probably want to know what the upcoming stuff is coming on so we just want to remind people,” Karalenae said.

The newscast is a way to not only reach parents but to teach teamwork, language development, communication and writing skills, and public speaking. At the most recent parent-teacher conference, Hosteen saw 100 percent of his classes’ parents stop by.

“It feels nice,” Karalenae said about the support from her community.

The newscasts get on average over 1,000 views. This type of publicity can be a little nerve-wracking, especially if you’re a little shy like Taylor Arizona, 11.

“At first I was pretty shy and then as I started doing more and more of the podcasts and the news reports it just builds me up to not be shy,” Taylor said.

The young cowboy is used to an audience watching him showcase his skill as a steer rider, but talking to people is a whole different beast to cover.

“It feels good not knowing how to be shy like you’re all tight standing there reading with your arms down,” he said.

Today, Taylor is much more at ease on camera and enjoys doing it. He usually reports on sports, which is very fitting for Taylor who is also a cross-country runner.

When Taylor grows up he wants to be a PBR bull rider.

Trece Tsingine, 10, can relate to her classmate Taylor because she, too, was a shy one. Trece had a difficult time speaking up last year as a fourth grader. This year is a whole different story.

“Just wanting to get out of my comfortable spot,” Trece said about why she joined the newscast. “It feels better because when I was just quiet I didn’t get to talk to anybody.”

Trece has been the anchor twice for the newscast and has learned quite a bit.

“I learned some new words and I learned how to talk more,” she said. “I’m learning to communicate. I usually do the news ones by myself but now I’m doing it with someone else.”

Trece loves doing the newscasts but wants to be a basketball player when she grows up.

All the students in the class enjoy participating in the newscasts. The whole production requires a lot of background people like a director, the kids who write the scripts on the dry-erase boards and those who make sure the shot is well lighted. It requires teamwork and the class is good at pulling it off every week.

The newscasts can be viewed on the Tuba City Boarding School Facebook page.