The U.S. Department of Health and Human Services must restore the $7.3 million it cut from Navajo Head Start’s budget and institute an appeal process in the event the Navajo Nation wants to protest future cuts, a U.S. district court ruled Tuesday. 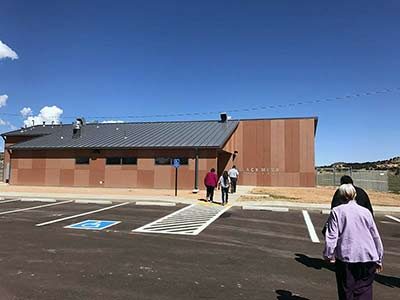 Navajo Times | File
After a 20-year wait, Black Mesa Chapter finally got a Head Start building this past summer.

“The court granted the Navajo Nation’s position that the national Head Start did not notify the Navajo Nation (of) its decreased funding,” said Health, Education and Human Servicers Committee Chair Jonathan Hale in a phone interview. “There should have been some kind of consultation. They shouldn’t have done that.”

Navajo Head Start has been facing issues for quite some time. Last July, the program’s director, Sharon Singer, was dismissed after an internal investigation revealed she had grossly mismanaged federal funds. Finding new leadership was a struggle. But it was the decreased enrollment that led to the funding cut, as funding is based on the number of students.

Not only did the U.S. Office of Head Start want to decrease funding they also wanted to decrease the Navajo program’s enrollment quota from 2,150 to 1,309, which would have meant a permanent funding decrease.

The feds warned the Nation about the impending cut in a Dec. 19, 2016 letter to President Russell Begaye. Linda K. Smith, deputy assistant secretary for Early Childhood Development at the Administration for Children and Families, stated that funds for Navajo Head Start could be reduced if nothing was done about the under-enrollment problem.