Even after developer John Gunderman removed the teepees, hogans and Native American themes from plans for the “Historic 2 Guns Luxury Glamping Resort,” on May 12 the Coconino County Board of Supervisors still unanimously voted down a resort/commercial zone change for the project.

“I’m honestly confused as to how this project could have come this far without the developer/architect not realizing how deeply rooted in stereotypes and blatant cultural appropriation this resort is,” constituent Amy Cegielski testified.

“While I appreciate the decision to remove the teepees and hogans, they never should have been included in the first place,” she said. 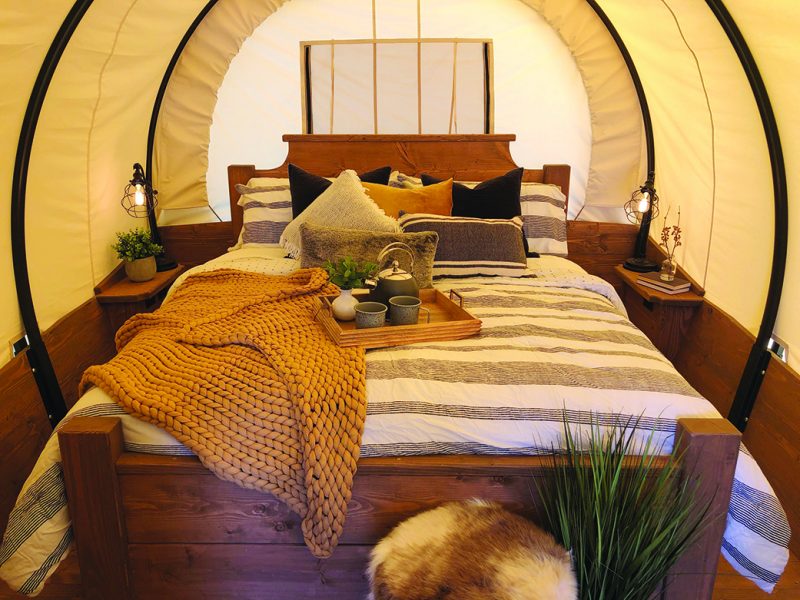 Submitted
This photo shows the inside of one of the “covered wagon” rooms that will be part of the Historic Two Guns resort if approved.

Cegielski, one of several members of the Navajo Nation who addressed the board via Zoom last Wednesday, said while she appreciated Gunderman had done some homework, it was not nearly enough to understand the relationship between the land and surrounding communities and what the board of supervisors owes the original inhabitants.

“The change will be detrimental to the public health, safety and convenience and welfare and will adversely affect the established character of the surrounding neighborhood and detrimental to the adjacent properties,” said Begay.

In her deliberations, Supervisor Patrice Horstman said she was concerned about the developer’s lack of understanding of the local tribal culture and resources, including sacred sites and traditional plant collection areas in and around Canyon Diablo.

“We have heard many statements from Indigenous neighbors about their concerns on having a plan which brings 774 lodging units, plus employee lodging, and includes a water park, drive-in theater, mini-golf, a laser shooting gallery, and special events,” she said.

Horstman reiterated that the board made clear the expectations that the county had last December when the vote was postponed and Gunderman was given a list of “homework.”

“The developer failed to address most of these issues and, even though five months have gone by, did not drop the offending and insensitive use of Indigenous culture until approximately two days ago,” said Horstman.

Furthermore, the plan still carries on the western myths, stereotypes and prejudices associated with that, she said.

Statements opposing the project submitted to the board included the Navajo Nation Human Rights Commission and Azeé Bee Nahaghá of Diné Nation.

“ABNDN recognizes the use of American Indian culture for commercial profit to be extremely disturbing and dehumanizing toward the Navajo people and many other tribal nations,” ABNDN President Steven Benally said in a May 10 letter. “This type of development is consistent with the ongoing concerns related to ‘cultural appropriation.’”

Historically, outsiders have and continue to use American Indian customs and practices for personal and financial gain, he said, which results in negative stereotyping, prejudice, discrimination, and violence toward American Indians that cause trauma and detrimental health impacts.

Delegate Thomas Walker said the project uses an “all-too-familiar” business model that utilizes Native American cultural artifacts, apparel and “ceremonies” to generate revenue, with little input from actual members of the many tribes that reside in the immediate area.

Delegate Elmer Begay said, “In addition to the cultural appropriation of Native American art, culture, and history, the proposed development romanticizes a time of conflict between the settlers and the first inhabitants.

“Additionally, the potential influx of tourism to the area increases the risk of desecration of archaeological sites and culturally significant areas,” he said.

Carmenlita Chief, who decried the use of covered wagons for lodging, said, “For far too long we have had our narrative pulled through a non-Native lens and that has harmful repercussions, and implications to policy development when it pertains to Native American causes and issues.

“Those are associated with settler violence against Native people,” said Chief. “We don’t need those reminders of what happened to relatives and ancestors centuries ago.”

“I find it is detrimental to public health, safety, comfort, convenience and welfare,” said Horstman. “When people come before the board of supervisors and ask for special treatment on zoning then we have a responsibility to show that there is a public benefit and a public purpose for this change.”

Fowler said while she appreciated Gunderman’s attempts to do his homework and the removal of all of the Native American structures and themes from the project, she was still very troubled about the marketing aspects of the resort plan and how Native Americans are portrayed.

“It is very offensive,” said Fowler. “We are a proud people. We are proud of our land and that’s why there’s a lot of people who have come out to provide their opinions.”

She said the preservation of cultural sites and practices was of utmost importance.

“That’s why I had asked you to do your homework,” Fowler told Gunderman. “You could have delayed this meeting and not come here until you had talked to more community members, chapter officials and delegates who are very concerned with the issues who could have advised you.”

Fowler also said the tribes involved should have been officially consulted before the glamping resort proposal came back to the board.

Supervisor Jeronimo Vasquez expressed concern, echoed by many, over the lack of a cultural resources and archaeological review, which could have identified burial sites and medicinal collection areas among other things.

“You may find that you might not be able to develop there because of these ecological and historical footprints,” said Vasquez.

Berta Benally testified, “My husband is a traditional medicine man and he has told me about the many tragedies and atrocities that have occurred at Two Guns, the burial sites that are still there and the history which is not very pleasant.”

Furthermore, the ecosystem is extremely fragile, the drought is not letting up, and the high winds and dust storms are not healthy, she said.

Supervisor Begay also stressed the importance of areas where medicinal herbs are collected for ceremonial purposes and traditional cultural practices.

“I don’t want to put my tribe in a situation where they can’t have access to these items,” said Begay. “As far as I can remember, collecting herbs and using them for ceremonial purposes was very, very important and critical to our tribe.

“I cannot approve knowing that’s part of my upbringing,” she said, “and I have a lot of respect for my people, their health practitioners and medicine men that are out there.”

Begay emphasized that Coconino County supports the preservation of tribal cultural sacred sites, traditional cultural areas and recognizes these resources as assets to the regional shared cultural heritage and history.

Holly Barton, legislative district aid to Delegate Elmer Begay conveyed concern over the resort’s controlled access, which would be limited to paying customers.

“How would that impact our traditional practitioners and supply gatherers and how we would ensure privacy for them?” asked Barton.

“A lot of us who live around this area have a direct relationship with land,” Jeneda Benally told Gunderman. “We collect medicines and gather ceremonial objects in the area.

“When I heard you talking about access and that people would have to pay for access to places that are long held as being part of our cultural and spiritual lifeways,” she said, “that was a little bit shocking.”

Even with the hogans and teepees removed from the project, the “Wild West” concepts perpetuate harmful prejudices and stereotypes that Native Americans experience to this day, she said.

“There is still intergenerational trauma that so many of our people have,” said Jeneda. “My father still remembers when he would come to Flagstaff in his wagon and see signs that say, ‘No dogs, no Indians’ allowed.”

Board Chairman Matt Ryan said in order for the developer to have moved forward with a commercial project of this nature an understanding of adjacent community character was critical.

“The reason we paused last time was to suggest that it had potential conflicts and provided the opportunity for you as an applicant to go out and explore the potential impacts,” Ryan said to Gunderman. “You were advised and yet there was a desire to retain a pursuit of marketing elements that were in conflict with the surrounding character of adjacent neighborhoods…”

After the board’s vote, Gunderman told Navajo Times he realized his team probably should have “changed some things,” like taking the teepees out “sooner than we did,” but the intention was never to offend anyone.

“That’s never been my thought from Day 1,” he said.

“It was kind of a shock to hear and see a lot of the things that went on,” said Gunderman. “It’s sad to think about – everyone that opposed the Two Guns resort project really didn’t understand or want to understand what we were about.

“Nor did anyone want to sit down and discuss how we could have worked tougher and become a family,” he said. “We wanted to preserve Two Guns’ rich history for generations to come.”

Nevertheless, he said it was all a learning experience.

“Everything happens for a reason,” he said. “I’m thankful. I wish everyone good health and happiness.”