Letters: Farmers have committed no crime 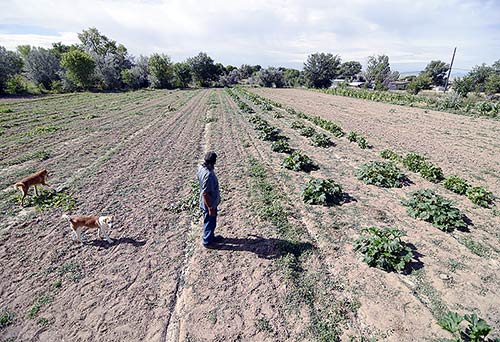 Shiprock farmer Earl Yazzie, who's been farming since he was a toddler, looks over his drying field Monday morning in Shiprock, N.M. Yazzie says he guesses he has about a three-window before his crops are destroyed from not being watered. (Times photo - Donovan Quintero)

Ask yourselves, why are we, the farmers, being threatened and punished? Why is the Shiprock Farm Board so “passionate” about taking away valid farm permits from certain farmers?

What crimes are they charging us with? None! NAPI is still farming hemp.

The Navajo Nation Department of Agriculture has never taken anyone’s farm permit away for any reason. Why are they letting the Shiprock Farm Board threaten us farmers with unauthorized action?

Farmers are afraid to grow any crop because the Farm Board members are using their titles and positions to physically threaten farmers, to intimidate and harass farmers.

During the raids on the farms growing legal hemp, the Shiprock Farm Board actively engaged in racial-driven hate against non-Navajo workers. They encouraged and incited racist action against the Asian workers. This is documented.

They claimed there were crimes committed against local residents and other farmers by Asian workers. This is a lie!

She is quoted in public as saying it is her “passion” to take away farm permits. She cannot do this. There are no crimes charged. Ask her, “What law are you using to say that you can revoke farm permits unilaterally and without authority?”

She is acting like a non- Navajo … wanting what? Revenge, promoting hate, inciting racist violence, encouraging hate and violence against farmers, many who are elders, who have farmed for decades. Ask yourselves, why is she doing this?

She personally organized hate-based racist protests against Asian workers and her own people, her neighbors, her relatives. What kind of Navajo leader does that?

What happened to our Diné way of life? What happened to talking things out? Her actions are hateful and spiteful. Why? Ask yourselves why? Why is an elected official acting so wrong?

Our elected leaders have listened to and bought into her hate and racism. They have taken her word without hearing the farmers and their experiences. They are neglecting their duty to be impartial and fair. They too are reacting based on lies and false rumors.

They won’t even take the time to listen to their own people, the farmers. They are only listening to the Shiprock Farm Board.

It is only a matter of time when they will be exposed for what they are doing. The rest of the world is watching and will judge the Navajo Nation and the people based on the Shiprock Farm Board’s illegal actions and hate-based motivations.

Hemp is not illegal and growing it is not a crime. Wait and see, the Navajo Nation government will develop its hemp regulation system, like they should have done since the year of 2000, and then they will take over hemp farming and not allow individual farmers to grow it.

They will make it an enterprise so the government can profit from it and not individual farmers. The government wants to be in the hemp business. It should stay out of business and govern. It should make laws that promote economic development of private business, not take over business.

The Shiprock Farm Board is wrong to threaten farmers with revoking permits. The farmers have not committed any actions that under Navajo Nation law are criminal. Period!

So, under what authority are they threatening to take away farm permits? Ask them. Demand they tell us. They can’t tell us what law they are using because we have not committed any crimes.

These two do not deserve praise

I don’t understand why you are praising someone who’s not all there most of the time? And the other someone who’s an immature adult who cackles when questioned?

These two whom are being praised for bringing the vaccine, they’re boasting and taking credit for most of the processes that were already in place. They’re going to bankrupt and disarm the country and start a war.

I believe it was a mistake to elect these two. Are we that easy to be bought off by a few trinkets?

In the news, one wants to be the friend of people of color and the other doesn’t want anything to do with them.

Thousands of people lost their jobs in the first few days in office. Now, they are fudging the number of people being employed.

Fracking! Is this what’s causing the shift in the magnetic field and its protective magnetic shield against the sun’s radiations? Divination principle.

Just pointing out some points that are not healthy for the “country.”

We must stop voter suppression

In 2020, the people of Arizona spoke loud and clear with their vote. Arizonans in Apache County and all across our state value the right to vote for the leaders of their choice.

Many signed up for the Permanent Early Voting List because it made it easier to vote. People are busy. And it’s not always easy to get to the polls, especially on a work day and when the voting box might be many miles away.

The result is that many citizens did not vote in each and every primary election. Voting is not mandatory for citizenship. Voters will exercise their right to vote when it works for them.

Arizona’s new voter suppression laws signed by Gov. Ducey infringe on the idea of early voting, something that we all found important.

Last week Republican legislators ignored the people, and tribal nations, by changing the law making it more difficult for underrepresented communities to vote.

Republicans lost the last election. It was fair and impartial without fraud. So instead of reshaping the Republican message, these legislators are making it harder to vote so that fewer Native and Black and Brown communities will turn out at the ballot box.

We will prevail in spite of the Republicans using every means to hold onto power.

This is the time when Democrats and Independents must organize and make sure we elect leaders who will genuinely stand up for us, voting for those who respect our voting rights. We demand diverse representation in all election offices and that means we need to work harder to gain Democratic control of our state Legislature.

I applaud those who fought hard to prevent the passage of these bills like the Secretary of State Katie Hobbs, recorders and election officials, tribal and community leaders, and other citizens groups. We need to keep up this fight and organize together.

I remain committed to fighting for our right to vote and will continue to register voters and work with our county party to turn out voters each and every election.

Voter suppression bills like SB 1485 and others were drafted to make it harder for our communities to vote. We will stop them and will work to vote them out. It was wrong for the governor to sign them.