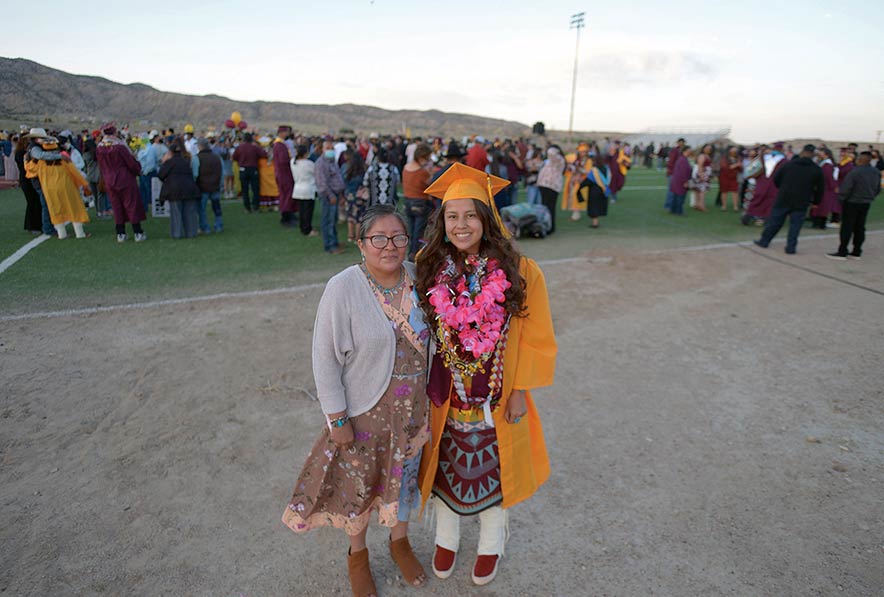 Her tears were both pain and joy.

She sat with her family as she watched her daughter Niquole Dean walk onto the stage on Friday to receive her diploma from Tohatchi High School.

She had another daughter who was supposed to get her diploma too.

Marinda Dean is filled with regret and sorrow knowing she will never see her daughter Candice Dean alive again.

But the mother celebrated Niquole’s graduation on Friday evening, along with her family.

“(Candice) was so excited for her senior year,” Marinda said. “She would have been graduating today along with her sister.”

A year ago in 2020, Candice Dean – a Tohatchi Lady Cougar athlete – was killed when an alleged drunk driver veered into the southbound lane and crashed into the vehicle she, Niquole and their brother Darnell Dean were in. The driver was driving northbound on U.S. Highway 491.

Marinda said she was home when Candice and her siblings left. According to a May 28, 2020, Navajo Times story by Quentin Jodie, the three left their home in Mexican Springs, New Mexico, to meet their father, Beau Dean, in Gallup.

“They were just supposed to go into town and come right back,” Marinda said on Monday, explaining they were supposed to exchange vehicles with their father.

“The phone rang and I answered it,” she said. “And it was my husband on the other end. He says, ‘The kids got into an accident at the junction.’

“My son Darnell told his dad there’s something wrong with Candice,” she said. “I started racing around the house trying to get things together and trying to think straight, trying to think positive.”

She began to look frantically for a ride to the accident. Her phone rang again, and it was her son Darnell.

By the time she reached the scene of the accident, Navajo Police had already cordoned off the area and wouldn’t let her approach. Her son came up to her and said he was sorry for what happened.

A helicopter airlifted Niquole to the hospital. She was admitted to the intensive care unit at the Gallup Indian Medical Center for serious injuries.

According to Jodie’s story, the other vehicle’s driver was charged with involuntary manslaughter and reckless driving. The driver, from Shiprock, was flown to Albuquerque for his injuries.

Nearly a year later, Marinda wore a picture of Candice on her blouse. She had a big smile and watched Niquole graduate. She could not help but think of all the plans Candice wanted to start after high school.

“She was gonna graduate with her little sister and they were planning to go to the same college in Utah,” Marinda said. “She wanted to open a bakery here on the reservation because she was huge on baking.”

During her time in high school, Marinda said, Candice was an honor student and was taking college courses from San Juan College. She also played volleyball and ran cross-country, but it was for basketball that she trained extra hard. 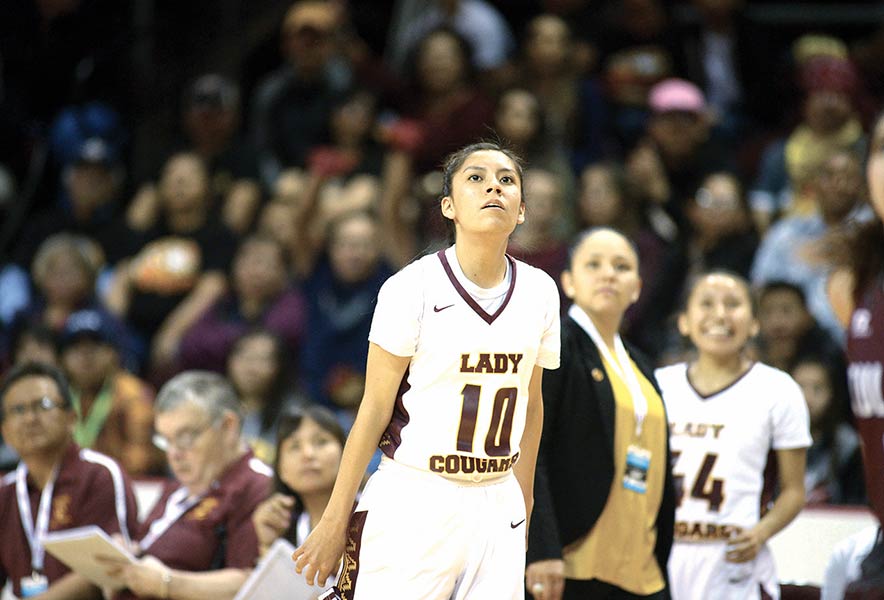 Navajo Times | Donovan Quintero
The late Candice Dean makes a three-pointer for the Tohatchi Lady Cougars in a semifinal win in 2018.

Candice was a first-string player who had grown accustomed to hearing Cougar fans cheering so loudly that the ref’s whistle sometimes could not be heard. It was a level she strived for.

In 2018, during the New Mexico Class 3A semifinal against the Tularosa Lady Wildcats at the Santa Ana Star Center in Rio Rancho, she sank a three-pointer that got Tohatchi fans raising their Cougar paws into the air. Her play that day helped her team return to the championship game for another possible state title, which they had won in 2017.

To Marinda, her daughter was an athlete who worked hard to refine her game, a student who excelled in her classes — the little girl whose eyes sparkled on the court, amidst the cheers, near her coach, whom she admired.

“She really looked up to her coach Tanisha Bitsoi. She really adored her,” she said.

There was another person Candice looked up to: Kailan Mitchell, a star basketball player who helped the Lady Cougars win a state title.

“When she (Candice) was in eighth grade there was one player that she really, really looked up to, that she really compared herself to or wanted to exceed like she did, that was Kailan Mitchell,” her mother remembered fondly.

Marinda said she believes everyone will remember Candice wore the No. 10 basketball jersey.

Since her death, Marinda said her family seems to have a “void” in it.

“Sometimes it’s just unavoidable, that missing piece of her, our family, we just try to encourage each other to just stay positive,” she said. “So there’s an emptiness in our house.”
Marinda said she intends to become an advocate with Mothers Against Drunk Drivers. To her, drinking and driving is a choice.

“It’s ridiculous,” she said. “This shouldn’t have happened in broad daylight. It shouldn’t have. You could get a designated driver, call a friend, get a Lyft, Uber, something, to keep from taking a life. I’m just really opposed to drinking and driving.”

For the community and Tohatchi Lady Cougar fans, Marinda wants them to remember her little girl who loved the game and the highs and lows that came with it.

She wants them to remember she was a good person, someone who didn’t hold any grudges or hatred.