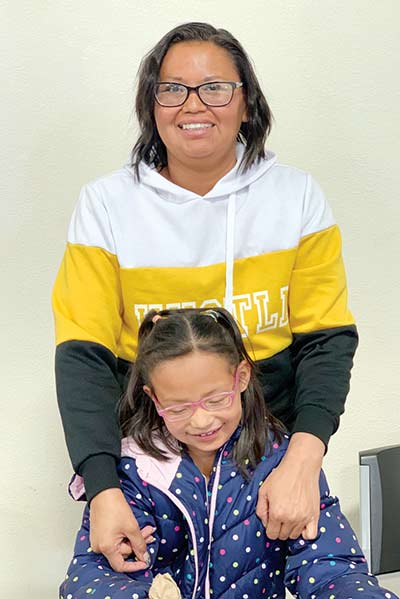 Kimberly Wahpepah and her daughter, Noami Sherman, during the Navajo Nation Human Rights Commission public hearing on April 2 in Gallup.

Kimberly Wahpepah wanted her daughter to be enrolled in Navajo language and culture classes at her elementary school. The school denied her request.

Wahpepah’s daughter, Noami Sherman, 7, has a learning disability and a diagnosis of speech delay. The school told her that putting Noami in Navajo language classes might “confuse her.”
Wahpepah saw this explanation as an excuse by the school.

“They didn’t want to deal with her,” she said in an interview during the Navajo Nation Human Rights Commission hearing on April 2 in Gallup.

The commission is working to assess the mistreatment of Native American students by border town schools.

According to the Indian Education Act, the state of New Mexico is bound by law to “ensure maintenance of native languages.” The state is also supposed to “ensure equitable and culturally relevant learning environments.”

However, due to Noami’s learning disability and speech delay, she was denied her right as a Navajo student to attend culture and language classes for a year.

Wahpepah wanted Noami to learn her language because it’s a big part of Navajo identity. This is something the school administration didn’t understand and wasn’t sensitive to, said Wahpepah.