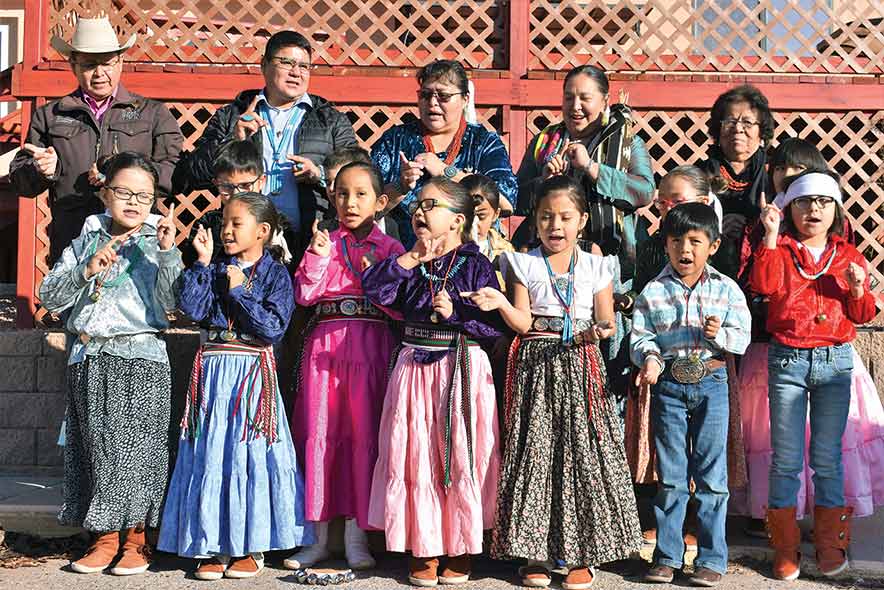 Delegate Nathanial Brown believes we are in a state of emergency with regard to the diminishing number of Navajo language speakers.

While a lot of good work is being done by educators, he said, the volume of services – limited by restrictive policies – is not keeping up with demand for Navajo language resources and curriculum.

“A lot of Navajos would like to learn, but they don’t have a place to learn,” said Brown.

“Our kids are starving to be healed,” he added. “They want to hear our stories. They’re crying for it.”

He said that at this pivotal point there is nothing more important than preserving the language.

“What will keep us Diné is our language and our way of life,” he said.

”This cannot compare to anything else,” he said. “There’s no amount of money that could ever replace it. It’s priceless. We need to make this our number one priority.”

He says a study done by cultural specialist Florian Johnson from Rock Point Community School revealed that 93 percent of Navajos spoke their language in 1980. In 1990, that declined to 84 percent, and dropped to 76 percent in 2000.

In 2010, the percentage of Navajo language speakers showed its steepest decline to 51 percent. It is estimated that by 2020 the number could drop as low as 25 percent.

“If we want to continue to be Diné past the next 10 years, we need to increase our speakers,” said Brown.

Brown believes no other priorities on the Nation compare to the goal of rescuing the language.

“If we are using money in ways that will not sustain our language and culture, we’re spending money in the wrong places,” he said.

Brown stresses timing is of the essence while we still have our elders and our knowledge holders as teachers.

“We are literally at the tipping point,” said Brown. “We need to have a language revolution. This is the time to do it.”

Last September, the Diné Bizaad Subcommittee was created by resolution to “preserve, protect and restore Diné Bizaad” across the Navajo Nation.

Brown said the group wants to hear the truth about what is going on in the schools with language education and work toward making the necessary policy changes to ease regulations and help Navajo language teachers expand their work.

“I want to be a conduit,” said Brown. “I want to be part of the process. I’m not the expert. I just have a passion for my language.”

Many people are surprised to find out that that Navajo isn’t the “official” language of the Navajo Nation already, but that is the case.

“I was floored,” said Brown.

“We’re a sovereign nation in the United States with the biggest land base, with systems and fundamental laws,” he said. “How can that be?”

For this reason Brown intends to introduce legislation to make the Navajo language the official language, which he hopes will help turn the tide toward raising awareness about how dire the language situation is and draw attention to solutions.

“When it gets to Naabi and Council, that’s when we will have the most robust conversations,” he said.

Brown says the DBS won’t be able to “fix everything,” but with the help of teachers, experts, institutions, elders, and youth, they can make progress.

“We can’t do it alone,” he said. “This will need everyone’s help. We need all hands on deck.”

Barsine Barney Benally, Diné College early childhood educator and veteran Navajo language immersion teacher, said one of the biggest barriers in the standard educational environment are the mandates, including “English-only,” that restrict Navajo language teachers and reduce the amount of instruction hours available for students.

“There is a lot of red tape found within schools on the Navajo Nation that limits teachers,” she said. “You have many educators at different schools who are trying different things. Even though the commitment is there, rules and regs get in the way.”

Brown says he has heard over and over from Navajo language instructors that they are working really hard, but they feel like they’re spinning their wheels. They also say that “leadership” doesn’t support their initiatives.

“They say that they’ve taken things as far as they can but now they need help to create things like language nests and immersion camps,” he said.

“The teachers are just crying out for help,” said Benally. “There’s no support. There’s no professional development. No place where they can go to obtain resources.”

Brown said there is also a huge “silo effect,” meaning that even those who are doing good work aren’t necessarily connecting and sharing it with others.

He wants to create a central database or clearinghouse for teachers so that they can share materials and practices.

“It’s a battle every single day for language teachers and culture teachers,” says Benally. “I don’t think the majority see that.”

She says while there is progress happening, it’s at an extremely slow pace that isn’t keeping up with the accelerating loss of language.

For students, access to learning opportunities, especially Navajo language immersion programs, which are considered most successful, is limited.

Benally says that while there are schools and programs on the Nation that have immersion programs, especially in elementary school, there isn’t a single school on the Navajo Nation that is focused just on Navajo language and culture.

She said even immersion-only Navajo language teachers like herself are being told they have to teach English.

The problem with that, she said, is that a part-Navajo, part-English curriculum is never as effective so there is an overall reduction of speakers.

“Immersion has to be total,” she said. “If you want to work, you have to stay in the language.”

Benally said that at the end of the day, for most schools the goal is enrollment and enforcement compliance with regulations.

“Even though educational institutions might prioritize language and culture, they are always going to put mandates first,” said Benally.

Brown sees that the fallout from assimilation policies and the boarding school era still unfolding today.

Native Americans were told not to speak their language or practice their ways, said Brown, which posed an existential threat to their languages.

“Our parents and grandparents were told not to speak the language so we have shame and trauma that happened there,” said Brown.

“In only five generations there’s been a huge change,” said Benally.

Even today, with federal regulations and state laws, there are strict limitations to the amount of Native language that can be taught in schools.

“Navajo language teachers are saying help us change these policies for us,” said Brown.

Remnants of shame and shaming still prevail too, he said.

Brown says even today some children are scared to speak the language for fear they will make a mistake and be ridiculed.

Benally agrees, saying some people will only speak Navajo where it is meaningful and respected.

“If they don’t feel trusted and valued, they don’t speak,” said Benally.

She added that disrespect can even happen within higher educational institutions.

“There is neglect happening to our knowledge holders and the advocates of language and culture,” she said.

That’s why she’s grateful to delegates like Brown who are at the level where they can impact change.

“Something has to happen,” said Benally. “One person cannot do it all. We have to educate everyone.”