Delegate to request getting rid of Kit Carson’s name 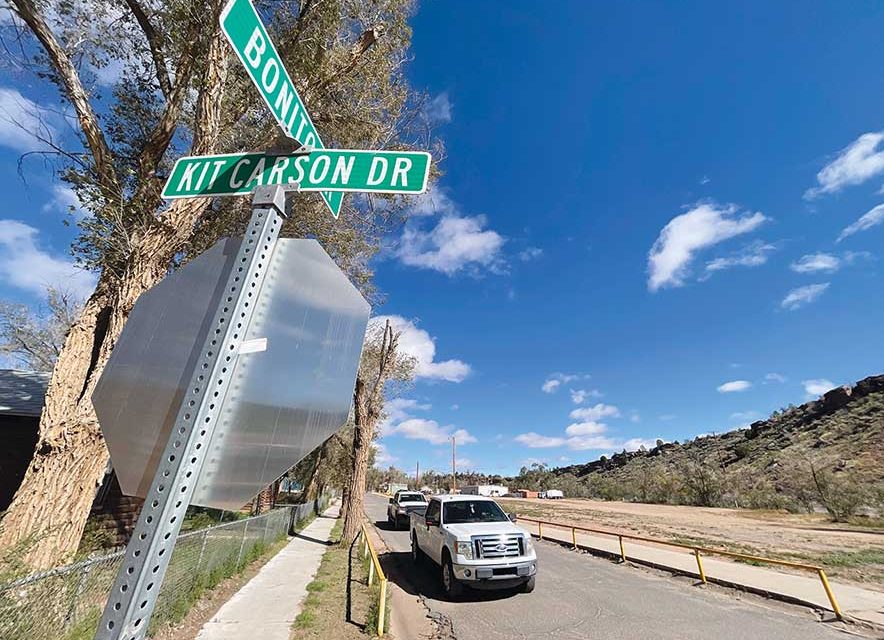 Navajo Times | Donovan Quintero A vehicle drives up to the stop sign at the intersection of Bonito Drive and Kit Carson Drive in Fort Defiance on Wednesday.

He even wants Kit Carson’s name to be removed from Kit Carson Park and Kit Carson Cemetery in Taos, New Mexico.

Freeland introduced legislation that still must go through a five-day comment period, which began on Wednesday. In his bill, he listed several reasons why Carson should not be celebrated anymore. 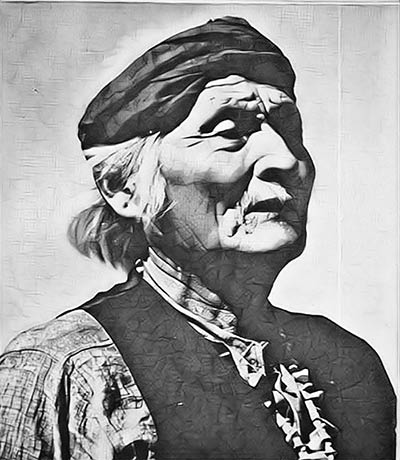 Navajo Times | Donovan Quintero
Dr. Aaron Price said his family was asked if the street name that is named after Kit Carson be changed to Hastiin Tséłbáí, who is his great-great grandfather. Hastiin Tséłbáí, or Pete Price, performed a BlessingWay Ceremony in 1938 for the newly constructed Fort Defiance Hospital. He was also known as Chief Silago, said Price.

“The Navajo people have continuously lived in the Southwest since time immemorial, but in 1863 Christopher (“Kit”) Carson, a colonel of the First New Mexico Volunteers, led a formal campaign and destructive war against the Navajo,” Freeland’s legislation says.

“Carson and his troops terrorized the Navajo people by burning crops, destroying homes, and slaughtering and killing livestock,” the bill says.

In 1863, Brigadier Gen. James H. Carlton ordered Carson to begin a “scorched earth” campaign against the Navajo people to force them to surrender and to relocate them to Fort Sumner, New Mexico.

Carson’s brutal methods of pillaging and destroying livestock and crops were successful. In March 1864, the Navajo people began the “Long Walk” to the military concentration camp – Hwéédi.

“While imprisoned at Fort Sumner, Navajos experienced slavery, starvation, prostitution, and disease,” the bill says. “It is estimated that between 1864 and 1868, more than 2,000 Navajos died at Fort Sumner.

Freeland said on Tuesday the COVID-19 pandemic gave him time to reflect on the subject.

“COVID has a lot to do with it,” he said. “I think about the 1,400-plus we loss to COVID. I thought about what our ancestors endured at Fort Sumner and what they went through.

He realizes the introduction of his bill has a ways to go. He anticipates it will most likely be amended to include Arizona, Colorado and Utah.

In Fort Defiance, on BIA property, a sign dedicated to the man Navajo history remembers not as a hero but as an evil man, names a street after him.

Price, the chief of medicine at Tséhootsooi Medical Center, said he had not heard much else since Stewart approached his family.

“I think it was, it was more along the lines of just getting permission for the move forward,” Price said. “And from the consensus across the family, it sounds like it was an honorable suggestion to even be considered for name change as well, so we were completely on board.

“It kind of fizzled away,” he said.

Hastiin Tséłbáí, whose English name was Pete Price, once presented a blanket to King Albert and Queen Elizabeth in 1918, while they were visiting the area. The royal couple made a stop in Gallup.

King Albert, in turn, pinned silver medals on him. He was also known as Chief Silago.

Price compares Carson to George Armstrong Custer, who died in the Little Bighorn battle in 1876.

“He’s a pretty bad dude,” Price said of Carson. “I didn’t study him per se, but a lot of war crimes and he enacted against Native peoples (was) sort of along the lines of what Custer was to the Lakota people, that was Kit Carson to the Navajo Nation.”

He said if the recommendation to change the street name comes again, he was pretty sure his family would support it.

Freeland said his bill, when it’s introduced to the state, might get a “push back.”

He said he would request to speak to the New Mexico Indian Interim Committee on Oct. 19. He said he hopes to get it on the Legislature in January.

He added he is more than willing to working on changing the street name in Fort Defiance, too.

“It has to go through the process,” Freeland said. “I imagine it’ll get a lot of attention. It is the beginning of a movement. It is a recognition for Navajo, for our history.”

Several lakes and rivers throughout the country also are named after him.