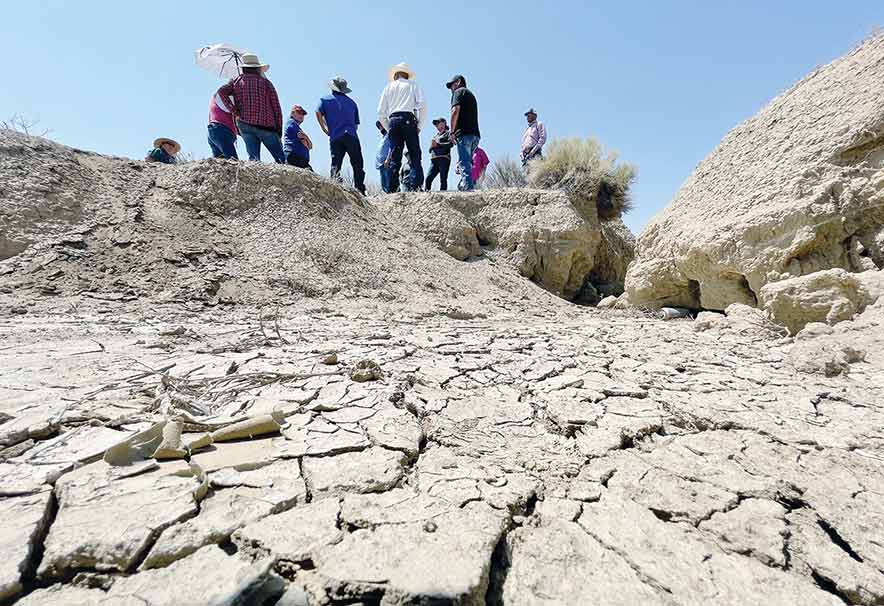 Navajo Times | Donovan Quintero
Officials from various Navajo Nation departments do a drought tour with the Resources and Development Committee on Friday in Huerfano, N.M.

An intense drought is gripping much of the Western half of the U.S.

Drought conditions in the West are more widespread than at any point in at least 20 years, according to the U.S. Drought monitor.

The hot sun scorched a group that was learning about drought and overgrazing.

Even as rain-giving clouds formed all around them, the relentless heat did not show any mercy as it cooked any exposed skin.

Bones, possibly from a horse, lay in the sun. Another pile of bones lay about a mile away.

The group tried to keep cool as Carlee McClellan, a senior hydrologist for the Navajo Department of Water Resources, explained what a megadrought means to the Nation.

The group, which included members of the Navajo Nation Council’s Resource and Development Committee and Fish and Wildlife and Department of Water Resources staff, stood at the edge of an arroyo in the arid terrain north of Lukachukai.

The group was on the fourth day of a tour across the Nation looking for possible solutions to reverse the devastation inflicted across the sprawling reservation.

The group viewed Ganado and Many Farms lakes – the latter completely dried up. The lake in Ganado was on the verge of drying up.

A small stream in Kinlichee, weakened by the lack of monsoon rainfall, fed drops of water to the lake.

The group learned that water scarcity is threatening feral horses and other livestock. Artesian wells, McClellan said, cannot suck up water from the aquifers because snowmelt and rains aren’t recharging groundwater.

“I think it’s going to be a really, really great idea to think outside the box,” McClellan said last Thursday. “And what I mean by that is we are out here, meeting with the people, and we’re meeting to see what the grassroots issues and concerns are, to see what the issues are from the bottom up.

“But then, we also need to do a top-down approach and meet with scientists, meet with engineers,” he said. 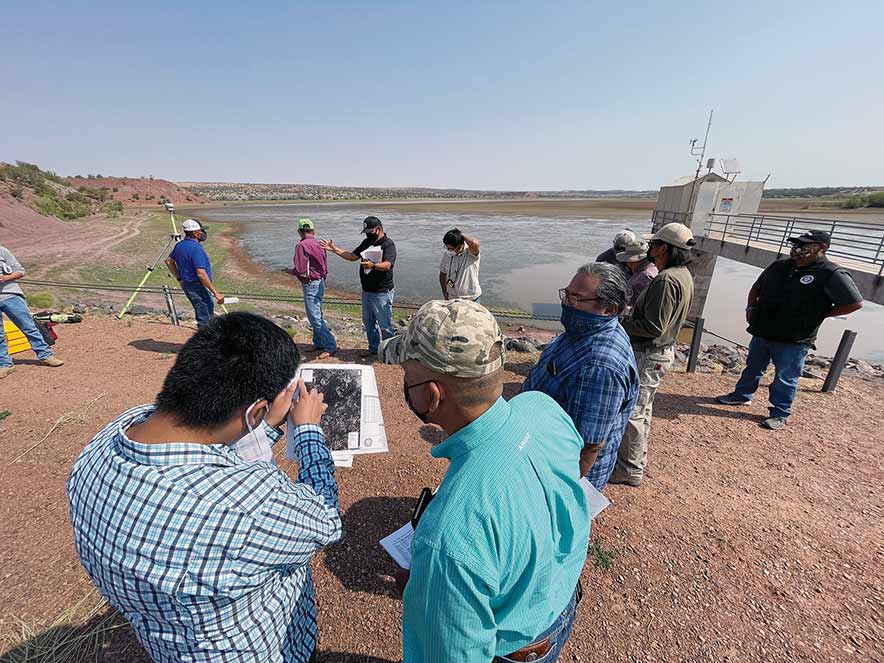 Navajo Times | Donovan Quintero
Delegate and Chairperson of the Resource & Development Committee Rickie Nez, turquoise shirt with cap, gets information on normal water levels should be while on a drought tour at Ganado Lake on July 12 in Ganado.

Another age-old problem is overgrazing, which is not new.

Centuries of drought, lasting decades at a time, including the current human-caused drought that has been hovering over the reservation for more than 20 years, have taken their toll on Diné country.

U.S. government policies such as former Bureau of Indian Affairs Commissioner John Collier’s New Deal wreaked havoc on the tribe, which was supposed to help improve the lands by forcing Navajos to reduce their livestock.

Even after returning from Hwééldi in 1868, Navajo land was already showing signs of stress caused by drought, the introduction of non-native plant species and grazing.

Non-native ranchers, according to the 2010 “Disaster risk assessment case study,” took all the prime pastures while the Navajos were imprisoned far to the east. When they returned, the ranchers fought to keep the land that rightfully belonged to the Navajos.

During the tour, they learned how drought and overgrazing were making profound changes across the reservation.

“We are in dire need of not only educating but encouraging people to downsize their livestock,” Nez said. “Let people know human life is important first, and then livestock. And we’re going to need help. Probably from the National Guard of the three states or even four states to help with water hauling to people that are in need of water.”

“People first,” to Nez, means erecting fences that would prevent wildlife, feral livestock and ranchers from entering so the land could begin healing itself in those fenced areas.

Nez said the livestock downsizing includes rodeo stockowners. He added measures to hold people accountable for driving their vehicles or ATVs to herd their sheep need to be discussed too.

“There needs to be a meeting with Resources and Development Committee and Law and Order Committee, to really address these overgrazing who are people that have livestock rodeo stocks,” Nez said. “I’m sure when sheep herders are driving, they have the air conditioner on and herding their sheep.

“It shouldn’t be like that,” he said. “If you have animals go out there and take care of it. You’re just ruining the environment, the dirt, the soil and everything else.”

Nez and the other RDC members visited a restoration site in Tsegi Canyon, just west of Kayenta.

“Because they were restricted the land started to grow back grass, and that was great,” Nez said. “So, what I was saying here was if we’re going to start restoring the land, we’re gonna need plenty of fences.

“We need to start somewhere, and somehow we just need to work on these small projects and educate people,” he said, “how we can all be a part of this solution of the drought.”

The mega drought that started in 1996 seems to have been fueled by human influence, according to climatologists.

The coronavirus pandemic that struck the reservation in March 2020 also exacerbated the drought problems, which further ailed Navajo people with no running water or electricity, and who were forced to stay home for months.

The combination, along with other impacts, created what Juan Declet-Barreto, senior social scientist for Climate Vulnerability, Union of Concerned Scientists, called a “syndemic.”

“Since the time of COVID we saw how existing climate impacts like heat, flooding, droughts and storms compounded with the social, economic and epidemiological fallout of COVID to create what’s been called a syndemic, or the combination of multiple simultaneous threats that is COVID and climate threads,” Declat-Barreto said on Tuesday during a virtual workshop.

A 2019 study published in the Proceedings of the National Academy of Sciences of the United States of America, found that heat exposure causes a myriad of heat illnesses like electrolyte and renal dysfunction, chronic respiratory and cardiovascular disease, and death.

Declat-Barreto added that people who cannot afford to pay for power or who live in rentals and public houses that don’t allow air-conditioning, become vulnerable to the dangers of heat exposure.

The 2019 study examined 50 million hospital records from 22 states for the summer of 2003-12 and found that hospitalizations for heat-related emergencies increased in the Southwest when temperatures were above 100 degrees.

A heat wave in June that shot temperatures above 100 degrees for many parts of the reservation caused a water shortage restriction by the Navajo Tribal Utility Authority, suggesting its water-loading station users need to reduce water usage to 500 gallons a week until further notice.

Deputy General Manager for NTUA Rex Kontz said a 500,000-gallon water tank in Dilkon was reduced to a couple of feet. Since the restriction issuance, he said the levels were back to normal.

Kontz said reservoirs could be constructed that would begin holding the tribe’s water. The stored water could then become lakes that could serve not only as a drinking source for people, wildlife and livestock, but could become recreational areas that could boost the economy for the tribe and communities like Sanostee.

Freeland said the river water would have to be treated before it could be drank but made no comment about storing water now.

“That waters got to go through a treatment process,” he said. “We went to that, we went to that testing process up by Dził Ná’oodiłii. The Bureau of Reclamation, they gave us a tour of what they go through.

“It’s like it goes through filters and filtration system to clean it up and make sure it’s equitable to drink,” he said. “And that’s why, it’s just, we can’t just drink it, that’s got to go through a cleansing process.”

During the tour, Herman Daniels said a community member from Monument Valley, Utah, died of dehydration. Freeland indicated on social media that “one human life lost to this drought is one life too many,” referring to a Navajo losing their life caused by heat.

“Our people need water. Climate change is evident and real on the Navajo Nation,” Freeland wrote.

In 1939, E. Reeseman Fryer, the tribe’s superintendent from 1936 to 1946, said Navajo way of life was situated within 16 million acres of land that was surrounded by a culture “more powerful than their own.”

“The traditional remedies of raid and migration, which the Navajo practiced in the past, are no longer open,” Fryer said.

“The immediate future of the Navajos lies within the 16 million acres,” he said, “where basic land and water resources must be recreated and extended, livestock reduced until it lives within its operating capital on the range, and new sources of livelihood developed to support the extending population.”