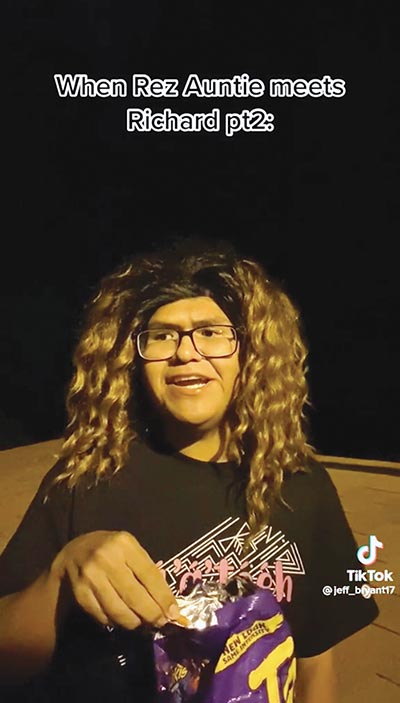 Jeffrey Bryant is shown in a screen-grab from his TikTok site.

Diné TikTok creators Jeffrey Bryant and Nicole Sam joked about having a “rez Coachella” during a TikTok Bryant made during the Gathering of Nations.

Little did they know they would soon have an event like the one they joked about.

“Indigifest” is the name of the event, coined by Sam.

The event will take place on Saturday from 3 p.m. to 8 p.m. It will be held 12 miles west on State Route 134 and 1.7 miles southeast of Sheepsprings.

Both began making TikToks in 2020 and have since blown up in the number of followers. Bryant currently has a total of 191,500 followers and Sam follows close behind with a total of 122,800.
They use comedy in their TikToks, while Sam also incorporates dancing in her content.

Bryant quit his job around 11 months ago and pursued his interest in becoming a full-time content creator. He said it was a risky decision but he is glad he did it.

“Deciding to quit my job and become a full-time content creator, that was risky for me but I’m so glad I did it,” he said. “I’ve accomplished so much within the last 11 months than I probably would have in, like, five years working.”

Sam said it has been a fun experience for her because it has lifted her mood and she has met a lot of nice people through TikTok.

“They (other Native TikTok creators) share their wisdom with me, and I share that wisdom with my followers, as well,” Sam said.

Bryant holds the same beliefs and said one of his favorite things is meeting new people who know him for his TikToks wherever he goes.

“It’s (journey as a content creator) been amazing, and I get to meet new people every day,” he said. “I always get so shook and amazed by how many people know who I am especially when I travel to other states.”

Both Bryant and Sam hope to grow their platforms in the future and to encourage Native youth in their own ways.

“I hope to be one of those creators that can lead the way for other Native Americans, to inspire the younger generation that it’s OK to do something that seems risky,” Bryant said.

Since Sam’s content leans heavily toward trendy dance videos, she hopes to use that to help younger Native kids develop confidence.

When she is in Gallup, she encounters many people who watch her TikToks. A lot tend to be younger girls who are excited to meet her.

These girls express to Sam how shy they are and tell her they cannot do what she does. However, Sam only encourages them and tells that it will take time, but it the end it will make them stronger.

“That’s what I hope that people will gain the confidence to do what they want to do,” she said. 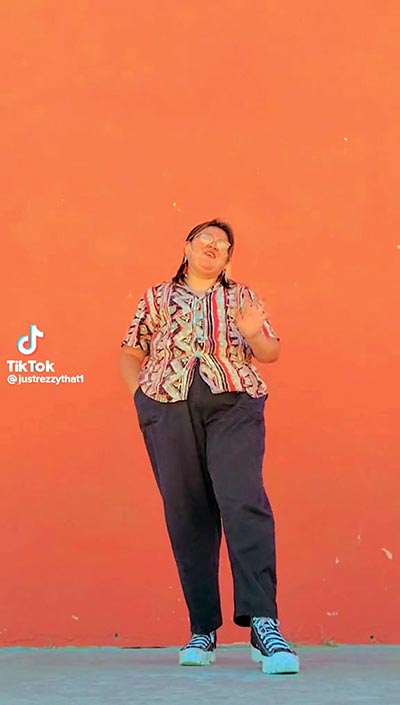 Nicole Sam is shown in a screen-grab from her TikTok site.

As previously mentioned, the idea for the event was originally born from a joke and now has blossomed into a full event with vendors, performers and other Native TikTok creators from across North America.

“Obviously there were so many rumors going around saying ‘Gathering’ wasn’t actually hosted by actual Indigenous people,” Bryant said. “So, me and Nicole were making jokes saying, ‘We’re Indigenous, we can probably do something.’”

Sam said the event also started off with Bryant’s birthday, which is on Sunday.

She said Bryant originally started talking about the idea as a small event where followers could attend a meet-and-greet with him on Saturday.

“It just grew from there,” Sam said. “It was just one where we talked about it and it just manifested.”

Bryant did not expect the event to get as big as it did, and he was surprised when people started asking if there were going to be vendors and performers.

The event has also gathered sponsorships, according to Bryant.

Bryant hopes that the event turns into an annual occurrence for the Navajo Nation.

“Since people don’t know where my community is, they don’t know exactly where Sheepsprings is, I wanted to bring some light on my community especially knowing that I grew up here and this is the place that I represent,” Bryant said.

Masks are required at the event and it is also alcohol-free. There will also be signs posted, directing people interested in the event.

Information about the event and on Bryant and Sam can be found on their Instagram and TikTok accounts which are under the same usernames on both platforms.