She reached for her phone and that’s all she remembers. 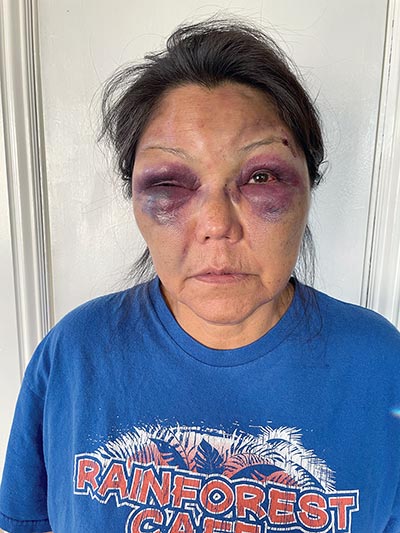 Courtesy photo | Christopher Billey
A Diné woman, who was left with eye contusions and lacerations, survived a brutal attack on the night of June 15 after she got off work. A man, who threatened to shoot her with a firearm and forced his way into her car, struck her with a rock he had in his pocket.

When she reached a hilltop with the man who forced himself into her vehicle, she told him she couldn’t give him a lift to his destination.

“I parked off the side of the road and I reached for my phone,” she said. “That’s all I remember.”

Christopher Billey’s mother was viciously assaulted last Wednesday night (June 15) after she got off work around 10:30 p.m.

Citing safety concerns, Billey doesn’t want his mother’s name revealed. Billey and his family allowed the Navajo Times to tell his mother’s incident that happened in southern Colorado where she works at a hospital.

Billey’s mother said she works at a business with a parking garage.

After she clocked out that night, she walked toward double doors to get back to her vehicle when she noticed a man crossing her path.

She only glanced at him but didn’t say anything.

“He got my attention and asked for a ride,” she said. “He said he was working at Home Depot and got off at 10 p.m., and was looking for a ride.

“I started walking backward toward my car,” she said. “I (unlocked) my car with (a remote) and went to open my door. I got in, (started the engine) and next thing I know he’s getting in the car.

“He kept getting in and he said he had a gun in his pocket,” she said. “I got scared, I didn’t know what to do.”

The man she described as someone with acne scarring and wearing a white T-shirt, demanded her to take him to Farmington.

“I said, ‘I can’t take you to Farmington. You need to get out,’” she explained. “He forced himself in and closed the door. ‘Now what am I going to do?’ I just went ahead, and I drove off.

“He kept talking and he said he had a fight with his woman,” she said. “I didn’t say anything. My heart was racing so fast.”

Billey’s mother said she drove down the roadway with no streetlights and kept driving with the unknown man who claimed he had a firearm in his pocket.

“It was dark, but I kept going,” she said. “We got up to a stoplight as we got to the main highway. I stopped and I glanced over at him … and I smelled alcohol on him and (asked), ‘Are you drinking?’

When they reached the turn toward Farmington, they drove up a hill and around a corner. At the next corner, she saw him digging in his pocket and asked him what he’s doing.

The man demanded she take him to Red Mesa and continued digging in his pocket.

Her car rolled backward. She felt something hitting her head and thought the man had shot her.

She looked around and saw the man with a black object in his hand. Her car rolling backward, she grabbed for the object and started swinging punches at the man.

“I don’t know how many times he grabbed for my arms,” she said. “He tried to pull me over to the side and I just kept hitting and hitting, as far as I could.”

When she released her seatbelt from its retractor, the man began hitting her with his fist over and over.

“And in my chest,” she said in an emotional interview on Monday evening. “I grabbed his hair and just held him down. I crawled out of the passenger side door.

“Before he hit me, he told me he had a gun in his pocket and he’s going to shoot me,” she said in tears.

Her car rolled down a hill, where she fought her way back up the hill.

“I grabbed Mother Earth! I crawled up the hill and I kept saying to myself, ‘Oh, my God, help me,’” she remembers. “My throat was so dry, I couldn’t scream. I crawled up for my dear life.”

She said because her throat was severely dry, she couldn’t scream for help, but she kept crawling.

When she reached the hilltop and felt the pavement, she started running into the darkness.

“I couldn’t see. My glasses fell off,” she said. “I tried waving down an (oncoming) car, but it just went pass me. I kept running again and another car came by, and it was a lady and a man.”

Another car also pulled up behind the couple. The woman told her people in the other car might also help her. The woman called law enforcement and requested an ambulance.

When another car pulled up, she told the woman in that car she needed help and to call for an ambulance.

“I told her, ‘I think I’m going to pass out’ and I fell to my knees,” she remembered. “I think I did. She told me, ‘You need to get up.’ She was talking on the phone, and she asked me for my information, and I gave it to her.

“She told me to get in the passenger’s seat and I got in,” she said. “I sat in there with her, and she called the police.

“I almost died,” she said. “She gave me a bottle of water and I think there was blood running down my face and she tried to wipe it off.”

She said before she began crawling up the hill, she remembered seeing her headlights shining on the man. She thought the man would come after her and pull her back down the hill.

“I hurried up the hill,” she said. “I crawled up that hill. But that lady helped me. The police showed up and I got taken to a (hospital in Durango, Colorado).”

After an examination and scans, medical professionals told her she’s lucky she didn’t have any broken bones.

She called her sister and she and her son arrived to support her at her bedside.

“I have children and I have grandchildren,” she said t’áá Dinék’ehjígo. “With my respect to them, I don’t want my name revealed.”

“I love you, son,” she told Billey as she got off the phone with him on Monday evening. “I love you.”

Billey, a realtor in Phoenix, said he’s enraged, especially because he couldn’t be there to protect his mother, a domestic violence survivor.

“My mom’s first marriage was to my dad, who was physically abusive, so I’ve got a lot of that – those traumatic memories – burned into my brain from when I was a kid,” Billey said.

“Years later, my mom was attacked again (by a cousin) with a brick, and it cracked her nose and her teeth,” he said. “All my mom was trying to do is help my aunt.

“It’s difficult for me because as a son, I couldn’t protect my mom,” Billey said. “And that’s hard. It’s really hard for me. Because it happened on the reservation, we never got justice for that incident and here we are again with a complete stranger – another Native man attacking my mother.”

Billey said the stranger who attacked her isn’t a man and it’s infuriating.

“It infuriates me!” he exclaimed. “Right now, this case is sitting with the tribal police. I’m losing a lot of faith with where this is going with them. I want justice. My family wants justice.

“And to see this happened to someone who has worked so hard in her life through domestic violence, who survived other attacks; and for this to happen to her again, it’s beyond frustrating,” he added.

Billey said he and his family are still working with law enforcement and doesn’t want this matter to fall between the cracks.

“We’re getting movement, but not enough,” he said. “A lot of this falls between the cracks when things don’t happen.

“Bringing awareness about things like this to hopefully get agencies, law enforcement to start putting together some kind of cohesive plan to protect our people – our women, our children,” he said.

Billey said he hopes people understand that incidents like this happen to Native women.

His mother said she had Mace in her vehicle and had taken some self-defense courses when she was younger, but what she knew about handling situations like this went out the window when the man attacked her.

“Things were chaotic, I understand that,” Billey added. “It’s hard to focus. But she fought for her life, and she got out of there. How do we help train and educate our people? How do we help them prepare for situations like this?”

Billey set up a GoFundMe campaign for his mother’s medical expenses and to help pay her bills until she gets better. As of Wednesday, the campaign raised $12,359 of a $13,000 goal.

Billey is asking for public assistance in locating the man. Those with information should contact the Southern Ute Police, 970-563-4401.