On the shoulders of giants: Grandson of Code Talker becomes Navy SEAL

Brian Price from Leupp, Arizona, wasn’t sure what he wanted to be when he grew up. 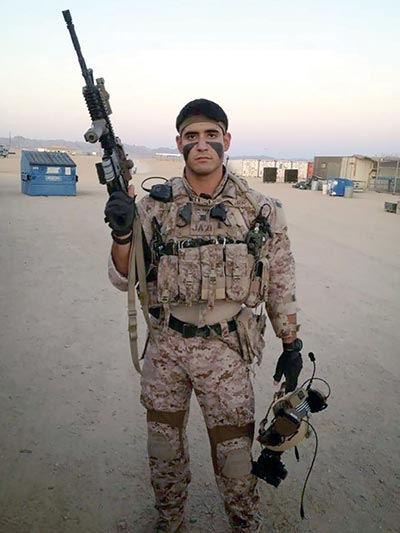 Little did he know he would go from being a fast runner on the rez to becoming one of the country’s most elite soldiers as a Navy SEAL.

“I knew that if I was going to go do this, I was going have to honor and represent my lineage,” Price said. “My grandpa was a code talker, so It’s like we have something to kind of uphold, and I felt proud to do that.”

The acronym SEAL stands for Sea, Air and Land Teams, the Special Forces branch of the U.S Navy, and is considered the toughest branch within the military.

Price was originally from Chinle but spent most of his childhood at Leupp. He is Kinyaa’aannii, born for Bilagáana.

He grew up learning the value of education with his grandmother and great-grandmother working as teachers.

He lived the average life of a boy on the reservation, working hard, attending Leupp Boarding School, running in sports and having family outings in Flagstaff.

Move to the Midwest

During middle school, though, his parents got a job opportunity in Missouri and they moved to the Midwest.

It was a cultural shock for Price, but he adjusted and would graduate from high school in 2007 and earn a running scholarship for Haskell Indian Nations University.

After a year in college, Price met old friends who had joined the military. While talking about their experiences and with the war in Afghanistan ongoing, he decided to enlist.

“We always looked up to our elders and the warriors and the people that came before us,” he said. “I feel proud to carry on that tradition.”

He wanted to join the Special Forces, believing they would see the most direct action. He couldn’t find any openings or contacts within the army or Marines, but his father suggested to try the Navy and join a SEAL team.

Initially Price didn’t know much about the teams, but he decided to give it a shot.

Thanks to his strength and speed as a collegiate runner, he passed Navy boot camp and entered SEAL training.

There, initiates are placed in stressful situations, from lifting telephone poles to learning how to float while tied and blindfolded.

Price said it was a mental test as much as it was a physical one.

The worst was the segment of training known as “Hell Week,” where courses are intensified and recruits have to work with just four hours of sleep and minimal breaks.

But Price was able to pull through, being one of 43 graduates out of 350 candidates to earn the badge, “The Trident” of a Navy SEAL, in 2009.

“There’s always the small tad, bits of racism here and there, people being like, ‘Oh Squanto is going to quit’ and things like that,” he said.

“And that just made me more determined not to quit because I knew it wasn’t just like my name,” he said, “it was like, ‘No, I’m a Native person, I can’t just come here and quit.’

“I felt like I was representing,” he said, “so it felt good when I passed.”

BUD/S was just the beginning, though. Price would train for another three and a half years before he saw combat, learning different aspects that would serve him on the battlefield.

He was chosen to be a communications expert, putting him in charge of the radio, specifically trained to work with artillery.

In a way, this made him feel connected with his grandfather and what it must have been like being a Code Talker.

“That was like standing on the shoulders of giants, like I kind of became a modern day Code Talker,” Price said. “I was the one that had the radio, and I was with the ground force commander calling in all the airstrikes and the artillery.”

Price traveled around the world with SEAL Team Five, fighting in Afghanistan and other countries.

He also was a minority within his team, saying the SEALs are mostly made up of Caucasians.

He has met only one other Native within the teams. But despite being in the minority, he formed a close brotherhood with his teammates.

He admits he encountered closed-minded people in the military, but that didn’t stop him, nor did it prevent him from meeting other incredible people.

“So that cultural barrier that you see when you first arrived, or at school or your SEAL training,” he said, “that goes away pretty quickly because everyone that makes it, you can depend on each other because you’ve made it through all that stuff together.

“And you kind of become a family,” he said. 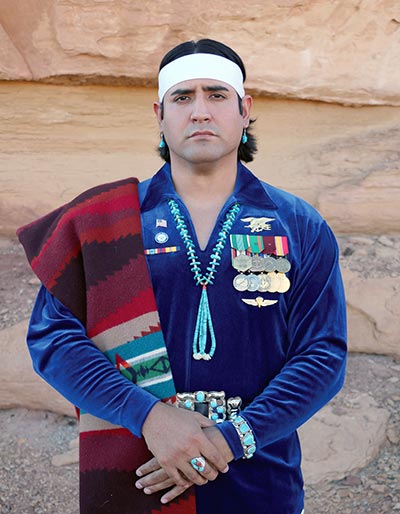 As a SEAL, Price met important people, dignitaries and officers from other countries as well as his own. He briefly met former U.S President Barack Obama.

The whole time, Price said he was on his best behavior, wanting to represent the best that the Navajo Nation had to offer, knowing he was probably the first and only Diné people would meet.

When his term of service ended in 2016, he decided to leave the military, having had an amazing time serving his country but also having suffered heartache from losing friends.

He left the Navy with a number of medals and ribbons for valor.

With what he earned in the Navy, he went to Columbia University where in 2020 he earned a bachelor’s in drama and theatre arts. He was inspired by the movies he and his family had watched when he was young.

Since then he has lived in New York, writing plays and occasionally acting in theatre or movie productions in minor roles.

He also volunteers to help fellow veterans as a mental coach and he hopes to return to school to get a Ph.D. in clinical psychology to better help returning veterans.

“I’d also like to work in mental health and give back to other people who are hurting,” Price said. “Because when I came back from the war, I was hurting too. Coming back, there was just a difficult time to adjust.

“And like mental health practitioners and like other vets who had gone through their rough time and figured it out were there for me,” he said, “so I like getting back to the community.”

Recently he returned home to Leupp for an extended stay. During his eight years in the Navy, he only visited his family for two months.

Price says it feels good to be home. He is currently working on a private play he hopes to get produced.

He also wants to help start a scholarship for Navajo kids who want to focus on arts like himself.

He hopes to have the play and scholarship going by next year, but for now he hopes his own story could inspire other young Navajo that anything is possible.

“We come from, like, a line of warriors and people who have harmony with the surroundings,” he said. “That’s a beautiful culture that I think a lot more of the world needs to see.”