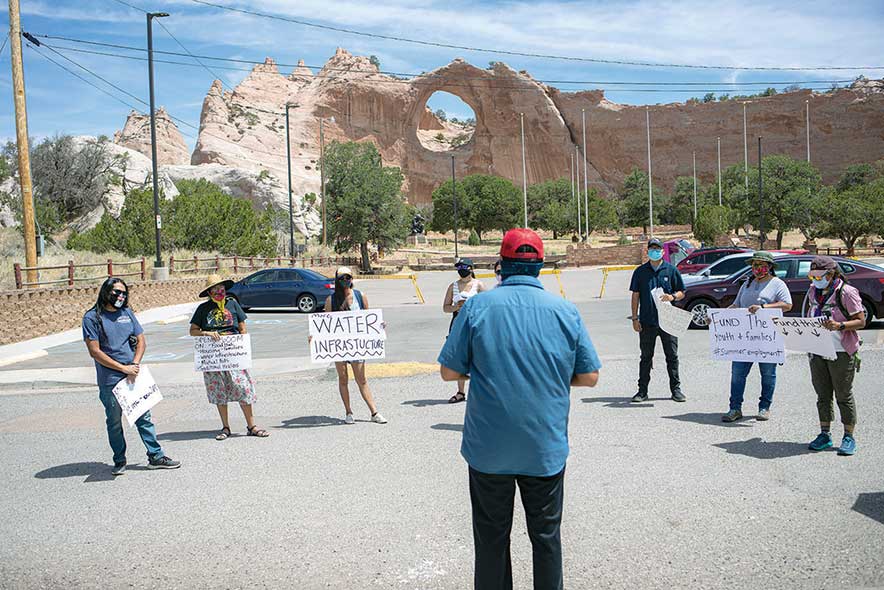 President Jonathan Nez speaks to protestors outside of the president’s office on July 10 in Window Rock.

As Navajo leadership try portray themselves as those whom Diné can trust to make the right decisions regarding the $714 million of CARES act funds, on Friday Navajo citizens delivered a message: Don’t steal the money and listen to what the Navajo people actually want.

The group’s goal was to take envelopes of proposals written by other citizens, then march to the Council Chamber and president’s office and hand the proposals to Navajo leadership.

“We are providing opportunity for community members to submit their ideas to personally provide their input to elected officials,” said Kyle Jim. “It puts elected officials in the spotlight to do the right thing with the funding at hand. We want to make sure that the money is spent wisely. We basically don’t want the elected officials to steal the money.”

The protest was hosted by two groups, which Jim is involved with. He serves as president of the Diné Introspective and is also a member of the volunteer group established in Shiprock, Arrowhead Lifeway.

He and volunteers Breanna Lameman, Sarah Chacon and Justin Badonie have been working to distribute donations to families in and around Shiprock area during the COVID-19 pandemic.

They had started with the defunct Northern Diné COVID-19 Relief Effort but after a political takeover the group decided to leave and begin Arrowhead Lifeway.

This has given them more of an opportunity to help others that live in more isolated and rural parts of northern agency, Lameman said, something the Northern Diné COVID-19 Relief Effort wasn’t supportive of.

“It was really different from what we were doing in the beginning,” said Lameman. “We were so limited with how much we could give out and what we could do, to now where we have the ability to have more freedom of what we say and how we want to provide our care packages to certain communities. We are hitting rural communities we want to hit, whereas before the stakeholders only wanted Shiprock to be served.”

With this type of initiative to help others and to provide equity among those in need, the young protesters took another initiative: to bring like-minded citizens together to protest to have their voices and ideas heard by the purse-string holders of the Navajo Nation.

Badonie has lost family to COVID-19, and in the midst of this, he tried reaching out to Navajo leaders for help but it wasn’t successful. His family finally recieved help after reaching out to Jim and Lameman.

As of Tuesday night there has been a total of 401 COVID-19 related deaths on the Navajo Nation. The total number of those infected is 8,290, with 6,163 recoveries.

Originally from Gaadahi, Badonie is now a volunteer with Arrowhead Lifeway and said he would like to see the CARES Act funds go directly to the people. He said it should also go toward water, electricity, and basic needs.

“I’ve lost family members to COVID and they weren’t receiving any help,” said Badonie. “These guys (Jim and Lameman) stepped in and gave care packages and donated their time.”

So far, what has been approved is $62 million for special duty pay, personal protective equipment for frontline workers, to disinfect Navajo facilities, food, water, and basic necessities, computer hardware and software for government offices, bathroom additions and upgrades for Navajo residents, dollars for ’638 health facilities, and dollars toward improvements of financial system to process fund expenditures.

President Jonathan Nez has said many times there are federal guidelines as to how these funds are to be spent and if the guidelines are not followed the Navajo Nation will have to pay back the federal government.

“I definitely feel there are some voices that aren’t being heard right now, “ said Sarah Chacon, whose proposal suggested funds going toward food sovereignty initiatives. “Yes, it’s very chaotic right now but this is an effort to speak for people who can’t come out. There are multiple ways we can go about using this money in a progressive and positive way.”

With the Navajo government shut down since March and expected to re-open July 27, which is subject to change depending on the COVID-19 case numbers, and being that it was Friday, there was a slim chance for the group to meet with any elected officials.

But as soon as they got to the front of president’s office, Nez was waiting for them.

“By what you are doing, it shows you’re engaged with the dialogue here on the Navajo Nation and Navajo government,” he said. “I felt I should come here and join you all and listen.”

“I know there are a lot of needs, but these projects are what we believe are universal,” said Nez. “ I encourage you to talk to your council delegates on what you want. At the end of the day, I can package up what you all want, then we turn it over to the council, they can change it all up.”

With her closing remarks, Lameman said food sovereignty is a necessity that needs be invested in, and in Shiprock they lack the technology and other resources to make this happen. She said even receiving assistance from her own local leaders is practically nonexistent.

“We have all that land and water out there, and we want to use it. We need your help,” said Lameman. “It takes not just me, but it takes all of us here, you and Navajo Nation Council, to be there for the people and not just to put the money in their pockets. I’ve seen too much of it, and it must stop now. We want this money to be used for the people, not for the Council delegates, president, chapters.”