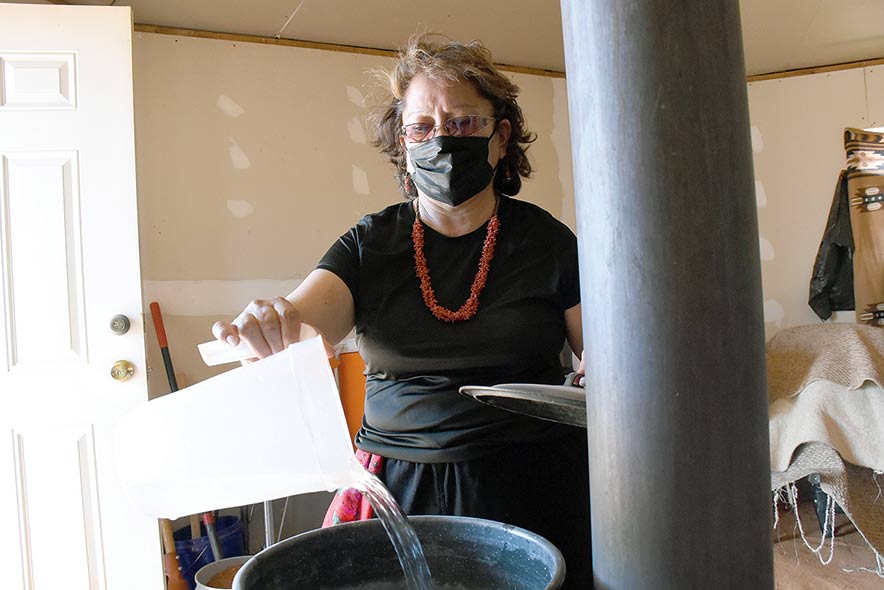 Navajo Times | Krista Allen
Jean Holiday uses a plastic pitcher to fill a stock pot of water for heating on her firewood stove inside her home in Train Rock, Utah, near Gouldings and Monument Valley, on Friday morning. Because she lives off-grid, Holiday said she hauls water at least twice a day for consumption, cooking, cleaning, bathing, and for her vegetable garden.

The last living elder in the Train Rock area was born and raised off-grid. His adult children say he didn’t experience life on-grid until he moved here from Paiute Farm near Tooh Biką’í.

His adult children said their father left his homeland and moved to Train Rock after the U.S. Bureau of Reclamation completed Dá’deestł’in Hótsaa around 1966.

He hooked up his house to nearby utilities, electricity in 1971 and water in 1980. 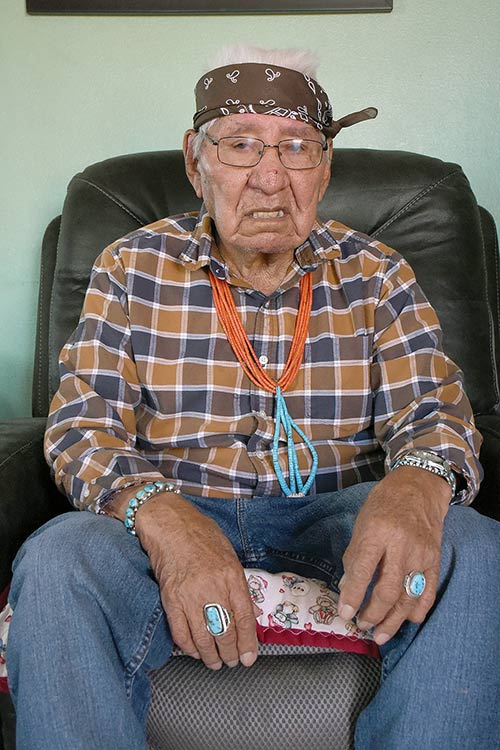 Navajo Times | Krista Allen
Francis Atene, 92, sits in his recliner in his living room inside his home in Train Rock, Utah, on Friday morning. Atene, a hataałii, is the last living elder in the area.

Now, he’s retired and stays home with his family.

On Friday, he walked from his bedroom to the living room inside his house and sat in his recliner. He tidied himself up and adjusted his bandana folded and tied around his forehead.

It was a special day for his Utah Navajo people. Officials signed a water rights settlement to bring drinking water infrastructure to San Juan County.

“Hardly anybody lives out here (Train Rock area) because there’s no running water,” said Helen Atene, Francis’s daughter. “You have to drive all the way to Gouldings, (Utah), to get water for livestock.”

But there is water north of here, toward Tooh Biką’í, the San Juan River, about 20 miles away, said Jean Holiday, the vice president for Oljato Chapter.

To get there, one must travel on a long bumpy road, and about 95% of the roads here are not paved.

The historic agreement, the Utah-Navajo Water Rights Settlement, concluded 18 years of negotiations between federal and tribal officials and affirms rights to water in Tooh Bikooh, the Colorado River.

With this agreement comes nearly $220 million to provide drinking water to 40% of Utah Diné who do not have running water.

The settlement was passed in 2020 as part of President Joe Biden’s bipartisan infrastructure bill but there wasn’t a funding mechanism, said Sen. Mitt Romney, R-Utah.

It changed with negotiations to include more than $13 billion to provide running water to tribal communities across the country.

Specifically, the settlement recognizes a reserved water right of 81,500 acre-feet of water for current and future use. It allows Utah Diné to draw the water from aquifers, rivers or Lake Powell.

The federal government will pay the Nation $210 million for drinking water infrastructure as part of the agreement, and the state will also contribute $8 million.

“This has been a long process, getting water within the community,” Holiday said. “We live in a dry area even though the river (the San Juan) is just right there. We didn’t have rights to it.

“Now, it’s official that we’ll be using the water, which is a joy to our area,” she said. “A lot of our community people are without water, and they have no running water.”

Living without running water can be challenging, said Holiday, whose home isn’t connected to the nearby utilities in Gouldings.

She hauls water at least twice a day – some for drinking, cooking, bathing, cleaning, and some for her vegetable garden.

Holiday said many people in the area celebrated for years that “water is coming,” but some never got to see it.

“She never got to turn on the switch for electricity, and she never turned on her faucet,” Holiday said, filled with remorse.

For decades, older men and women living in the area have been asking for public utilities. Many, like her late parents, hataałii John and Lula Holiday, and the late elder Betty Canyon, didn’t experience the luxury.

But they knew water was precious and never took it for granted.

“So, it’s joyous – some dreams coming true,” she said. “Our former leaders have been working on this for a long, long time.

“It’s really sad to see some of our elders didn’t see this,” she said, “but as a now-generation, I’m glad I witnessed this happen.

She added, “It’s a historic moment here. This isn’t just for today; it’s for our younger generation, our up-and-coming community.”

Helen Atene said she believes that the effect of piped water on test scores at local schools is significant. She believes having access to tap water and electricity at home correlates to a child’s test scores.

“Many of them probably don’t have clean clothes to go to school, so they just miss days,” Atene said. “It’s another problem we have, and it’s not just water.”

“Some kids get on the school bus from here (on the main dirt road), and they don’t have running water or electricity,” Holiday said as she drove toward her home. “That might be one of the reasons many of them aren’t doing good in school.”

Haaland said Friday’s action and investments would provide the Nation with autonomy and flexibility to design and build appropriate water projects for current and future water needs.

A 1908 court decision stated that tribes had the right to as much water as needed to establish permanent homelands.

Even though tribes possess senior water rights, the Diné were left out when seven western states divided up shares as part of the Colorado River Compact a century ago.

“Utah leaders have long prioritized finding a solution to bring running water and wastewater facilities to the Utah portion of (the) Navajo Nation, including ensuring its citizens have proper water infrastructure,” Romney said, “and I picked up that torch when I came to the Senate by reintroducing the Utah-Navajo Water Rights Settlement Act.”

Romney said his push for the settlement came from the late Sen. Orrin Hatch, who initiated negotiations many years ago.

“At the same time, we had this looming court battle between Utah and Navajo Nation over rights to the water in the Colorado River,” he said. “It was his vision to put those two things together in a legislation where we clarified the water rights and got water to those that didn’t have it.”

Some locals, including those needing water for their homes, were turned away from the signing outside the welcome center.

“We do need water,” Atene said. “We need some more windmills out here for our livestock.”