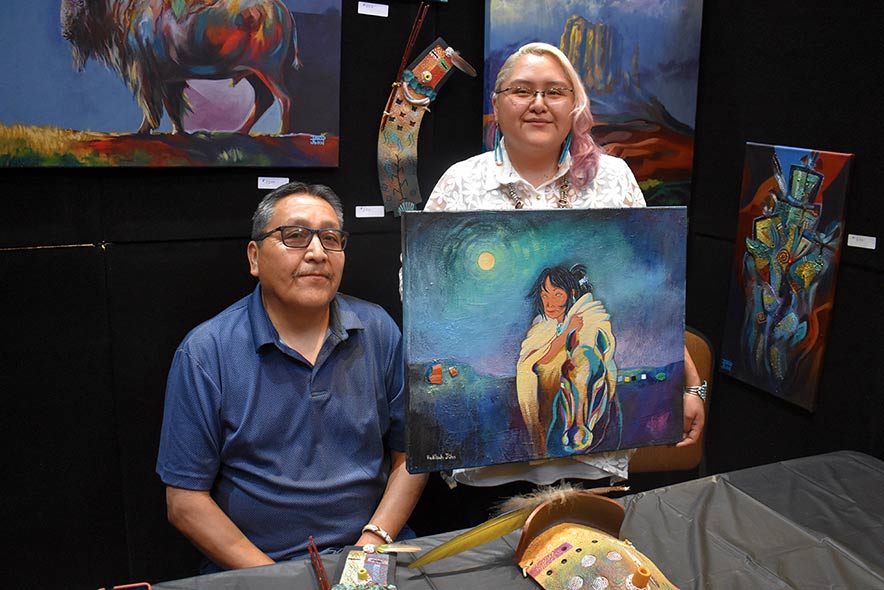 Hadiibah John, 26, an artist whose name means “the one that got away in the war,” is making a splash in the art world with her unique and striking paintings that pair traditional Navajo characters with modern Japanese “anime” style.

Her paintings allow her the freedom to create beyond stereotypes.

Her focus lately has been on portraying strong Navajo women who are balanced in their identity and imbued with traits that might normally be considered “male,” such being a warrior or hunter.

“I’m trying to give a different role model for females that provides an example of what it is to be strong,” said John.

“You can be strong physically, mentally, emotionally, but you can also still have confidence and style,” she says. “You don’t have to fit into a mold to be a strong woman.”

John, who is from Kayenta, said she has been immersed in traditional Navajo culture and ceremonial life since she was a child. 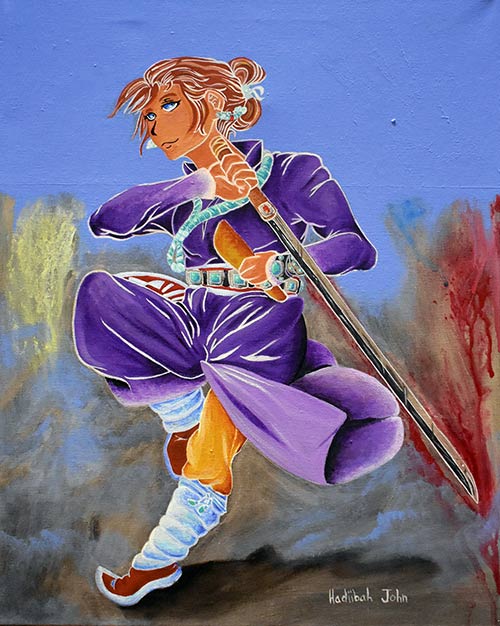 She was strongly influenced by her grandmother, Annie Attakai, who only spoke Navajo, from whom she learned the role of the traditional female in the household.

“She influenced me as a role model when I was small, because I would spend a lot of time with her,” she said. “I would watch her do her daily routines, watch her cook, clean the house and sew.”

John said she was also fortunate to attend schools that taught traditional culture classes, including Diné mythology and oral history.

At the same time, with a chuckle, John says she also became immersed in Japanese anime early on, a type of Japanese animation that uses colorful graphics to depict fantastic characters in action-filled storylines.

“I kind of got into it because my brother would play video games,” she said.

She was particularly fascinated by the diverse cast of animated Japanese cartoon and comic-book type characters that included young ninjas, martial artists or royalty, some with supernatural powers, who were on a spiritual journey, and how they confronted the challenges they faced along the way.

Specifically, she became captivated by the action-adventure “The Legend of Zelda” video game series.

“There’s a character in that game where the princess has two identities – there’s one where she’s a male ninja,” she said.

From there, she realized that women could have both female and male traits.

“Throughout my childhood, I only really saw the feminine, maternal side,” she said.

With her imagination sparked, John sought to find female characters who were both warriors and mothers, grandmothers or caretakers that she could relate to.

“I found that the Japanese animation shows tended to have more characters like that,” she said. “I would watch a lot of shows, read a lot of books just to find something I could relate to.”

By middle school, John was so inspired that she started sketching and drawing anime characters from Japanese TV shows, films and video games, including the animated historical fantasy movie “Princess Mononoke,” the period adventure TV series “Samurai Champloo,” and the manga series “Fullmetal Alchemist” about two brothers who search for the “philosophers stone,” or the key to eternal life.

“Then I would draw the characters and try to copy the style,” she said.

She was also thrilled to see a variety of characters who were determined to be true to themselves and not stray from their own path, including in the television series “Naruto” that revolves around a boy whose goal is to become number one ninja in his village.

“It’s tough for him because he’s kind of ostracized,” said John. “His whole journey is difficult because in the beginning not a lot of people want to talk to him or be friends with him.”

“It was really cool seeing that kind of character because most of the time you would think he would be sad, but instead he’s always pushing himself to do better and staying on the positive spectrum,” she said.

John said through absorbing all of these different characters, she was able to pick and choose what traits she thought were admirable that she wanted l to emulate.

“Each show portrays struggles and achievement in different ways,” she said. “Kind of like seeing paths that I can take to become successful.” 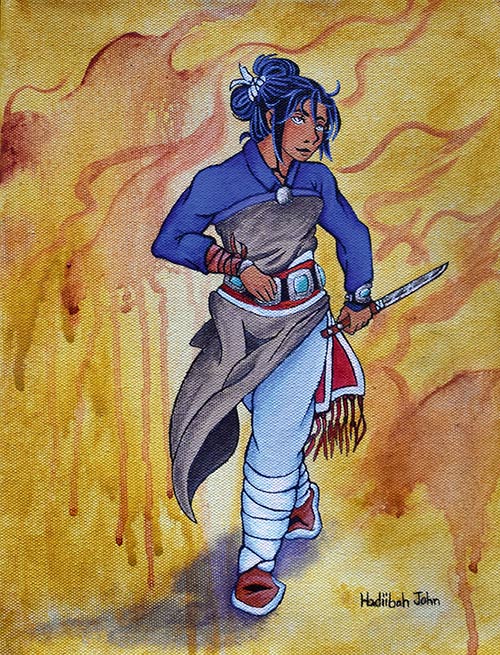 John took art classes through high school and also learned from her father, David K. John, a well-known Diné painter/sculptor, who focuses on traditional subjects such as Yei’Bi’Chei, the elements, land and skyscapes.

“One day, my Dad said, you draw that (anime) a lot – you should try making it Navajo,” she said.

She took her father’s advice and drew upon Navajo history and oral stories, to put forth a more balanced view of what the role of women could be like.

She also wanted to create new role models that young people could look up to, because contemporary Native superhero characters in today’s culture are few and far between.

Many of the characters seen in mainstream films portray dated caricatures of Native Americans, she said, such as male hunters or “super-spiritual” medicine men, but there are few role models that Native children can relate to.

“You don’t really have like a kid who is dealing with something scary, feeling ostracized by something, or just trying to balance traditional beliefs with modern society,” she said.

“That’s also why I like Naruto, because a lot of the themes in that show they take from their Japanese traditional mythologies and they made it more contemporary and cool for kids,” she said.

After she graduated from high school, she earned a bachelor’s degree in engineering technology from Southern Utah University, partially because she had witnessed the lack of running water and electricity in her community.

“I wanted to know how electricity is actually made and how it works,” she said. “I chose that field because I wanted to come back to the reservation to try and improve the technology.”

She was also influenced by her mother, Kathleen John, a middle school science teacher.

“That’s where I got into the whole science idea because she would bring it back home and plan science projects for her classes,” she said. “That’s where my interest in engineering started.”

In fact, her own drawings and paintings of strong young Navajo women helped her in own times of uncertainty, she said, like when she realized she was the only Native American in her classes.

“I did notice that sometimes Natives who come to that university don’t feel like they belong, or they feel out of place because they haven’t experienced that yet,” she said. “It’s a bit of a culture shock that they experience.”

“Sometimes I wouldn’t feel confident so I would sketch a character that was more confident or balanced and doing that helped me prepare for anxiety or anything like that,” she said.

In doing so, her characters became her inner superheroes and have given her comfort and strength.

As seen at her booth at the Santa Fe Native Treasures Art Market over Memorial Day weekend, John’s painting “White Shell Horse” depicts White Shell Woman on her moonlit journey back to the East on horseback.

“I painted her face the way it is to symbolize her contentment and happiness,” she said. “The background represents Dinétah.”

“You get the sense that she is capable of protecting herself and has the confidence to stay calm,” she said. “I also paint it that way because most of the time, women have to keep the persona of being calm or delicate – people want to see a more feminine side.”

“As most people do, they have a different side too, a more warrior-like side,” she says. “You may not see it in their outward appearance as much, but I do want it in their face, because we try to keep that hidden in most of our lives.”

As an example of blending of anime and Navajo symbolism, John said the long sword Mystic Warrior carries is a variation on stirring sticks that can be used for protection or utilitarian purposes.

“In Navajo mythology, when a female is born with sticks in their hands,” she said, “for females, it’s basically their weapon, their protective item.”

John’s choice of a pale yellow in the background to represent corn, she said.

“We use corn pollen in ceremonies or basic prayer,” she said. “She represents a blend of traditional and modern characters and styles.”

John says someday, if she has the opportunity, she might go to school to learn how to develop stories and bring her own Navajo characters to life in animated films so that other Native children can be inspired too.

She advises young people who would like to do something new and different like what she’s doing to “go for it!”

“Find people who think like you and appreciate what you’re doing,” she said. “Try your best, even if people might think it doesn’t look good or that’s already been done or say it’s not going to amount to anything, just try.”