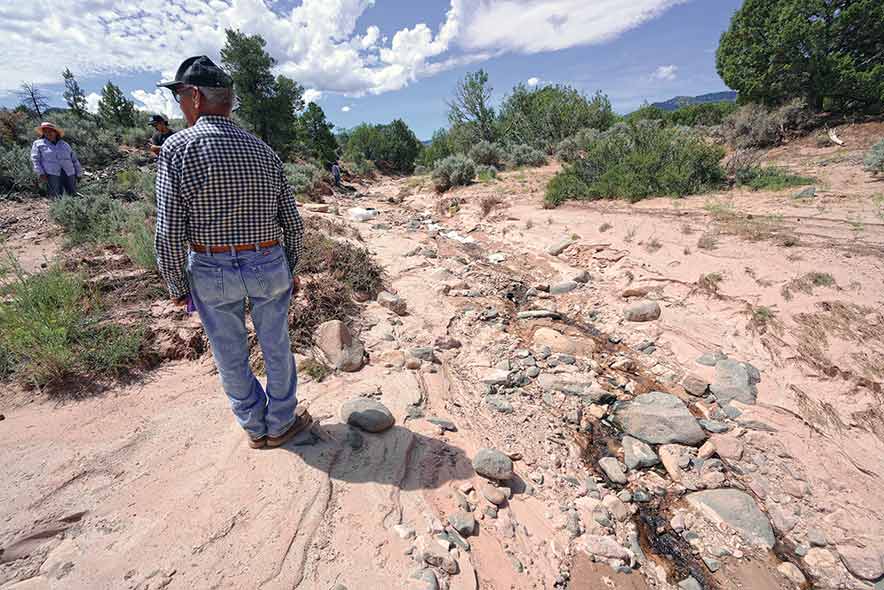 Navajo Times | Donovan Quintero
Richard Lee, 88, stands next to a ravine filled with a darkened substance that he says smells like oil on Tuesday in Red Valley, Ariz.

A pipeline owned by Capitol Operating Group that helps transport oil and its byproduct, saltwater, has broken, causing a spill. 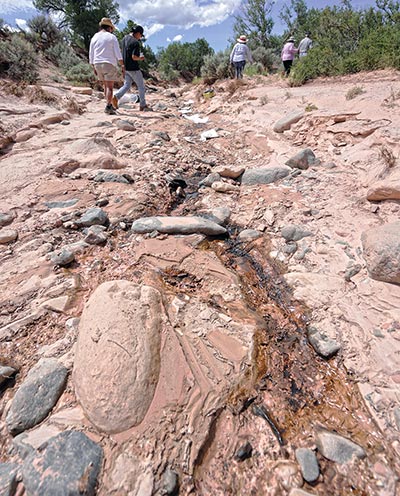 Navajo Times | Donovan Quintero
Richard Lee, 88, right, and his family walk across a ravine darkened by an oil spill on Tuesday in Red Valley, Ariz.

The mixture of oil and saltwater, known as brine in the oil industry, according to Navajo EPA worker Dariel Yazzie, was being pumped to a storage tank.

Yazzie said he and his team were told about 50 barrels, or about 2,500 gallons, spilled into a ravine that traveled nearly four miles down the mountain and into the valley.

When they arrived to the spill site, Yazzie said he immediately smelled oil, which prompted them to request the company to provide a sample of what was being pumped in the pipeline.

Yazzie assessed the amount spilled and estimated that possibly more than 80 barrels, or 4,000 gallons, might have been released into the fragile environment of cedar trees and other vegetation.

Signs of oil soaked into the ground and dark-colored liquid could be seen in the ravine among sagebrush and the roots of cedar trees.

Lifelong resident, Richard Lee, 88, whose family alerted Delegate Amber Crotty of the spill, said the damage could be permanent.

Lee said he was told a chemical agent would be sprayed that would help the oil spill biodegrade.

Lee wasn’t convinced the spray would thoroughly clean the spill.

Lee said the brine probably already soaked deep into the ground and underneath the rocks where the spray would not reach.

Yazzie explained the process of how brine is extracted from deep within the earth when fracking for oil.

“They extract the saltwater,” he said. “They have two options – they can discharge it or they can inject it back. And that’s what this operation is, they inject the water back.”

Yazzie and his team obtained a sample from the company, which he said they’d test so they can have a clearer idea of what was spilled in the valley.

Crotty said the Lee family notified her and the Navajo EPA of the spill on Sunday. When she arrived at the area, she used a stick and prodded the dark-colored liquid in the ravine.

Crotty said Capitol Operating Group, owned by David Burns, bought the oil and helium extraction mining site from Nacogdoches Oil and Gas Inc. She added the mining operations are regulated by the tribe.

According to the U.S. EPA, Capitol is based in Lafayette, Louisiana. The company, Yazzie said, has been operating at the site for about three years.

Overall, according the U.S. Energy Information Administration, the largest oil fields in Arizona are on the Navajo Nation.

Helium has also been in demand, for which the tribe sits atop some of the largest deposits in the world.

Red Valley also was a site where uranium ore was once mined.

The U.S. EIA reports that from 1944 to 1986, more than 500 mines on Navajo Nation land, mostly in Arizona, produced almost 30 million tons of uranium ore, which are now abandoned.

The largest producing oil field in Arizona — Dineh-bi-Keyah, also known as the people’s field — is on the reservation.

The field produced about 19 million barrels of crude oil since its discovery in 1967 and accounts for almost all of Arizona’s crude oil production.

Crotty said they needed to talk to the company to find out if they’re monitoring for any potentially deadly or harmful byproduct the company might be extracting.

She said she also needed to find out why she had to dig for information and be notified by the family, when it should have been the company and tribal departments in charge of mining regulations who should have contacted her.

“So, I’m calling people with not all of the information, when it should be the other way around, where we have a system that’s set up in a way that not only alerts the impact to community members, but like in any response,” she said. “Because we didn’t have that information, I’m frustrated that it got to this point, where it’s at.”

A small group of men who were contracted by the company used shovels and large cloths that looked like large paper towels to clean up the spill.

Lee, the elder patriarch of the family, stood by quietly watching the cleanup.

The workers explained the contaminated dirt and rocks would be removed and taken away to Farmington for disposal.

A look of dissatisfaction could be seen on Lee, who remembered playing in the valleys as a young boy while herding sheep.

His daughter said he was still looking for a shoe he left behind when he was confronted by a bear.

It’s not the first time a spill happened in the valley, Lee said to Crotty.

“The last time it happened, they used gunny sack, bring the kids over here. They step on it then they run up,” Lee said of a 2010 oil spill.

To Lee, oil spill cleanup procedures back then, and on Tuesday, do not make sense.

“They don’t think,” he said. “They’re not using their head right. I said, ‘I don’t know why you have degree.’ Me, I have zero degree.”

Lee told Crotty, “I read about Dick and Jane in day school. That’s it. So, Dick and Jane, that’s what I have on my degree. So that’s it. I know what I’m talking about.”

Clouds to the southwest began to form, which indicated of the possibility of rain, which Lee said could cause a flash flood down the ravine, sending the spill further down the valley.

“So, if it’s going rain, (it’s) going to wash off. They have to move fast instead of taking their time,” he said.

Before he left, he said the oil spill and sinking deeper into the soil weren’t taking their time.

“This one’s not taking its time, it keeps going every minute, every second,” he said.