Confusion on the referendum question, lack of voter education, and lack of communication at rural sites are deemed the reasons the Navajo Nation general elections had major issues. 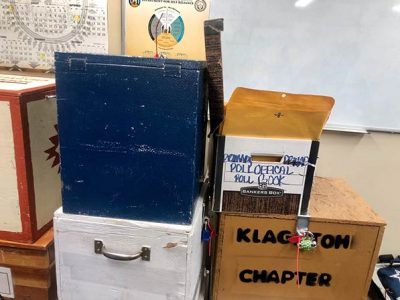 Navajo Times | Arlyssa Becenti
Chapter house ballot boxes sit idly in the corner of the meeting room for the Navajo Board of Election Supervisors on Friday.

During Thursday’s Board of Election Supervisors meeting supervisors went into executive session to discuss the reason chapter houses across the Navajo Nation ran short of ballots on Tuesday night.

“We need to have a response to the shortage,” said Sam Akeah, election supervisor for the Shiprock Agency.

Board Chairman Melvin Harris asked, just before the media and the supervisors who were candidates, including himself, were asked to leave for the executive session, how many chapters ran out of ballots and how many copies of those ballots were given to those chapters.

“We have media here, so I think we should have an accurate number first,” said Shirlee A. Bedonie, supervisor for Western Navajo Agency.

A news release sent out following the supervisors meeting stated there was confusion on the referendum question regarding salary adjustments for the president and vice president that led to “spoiled ballots.”

“Some voters misread the questions in which the ‘No’ vote did not allow a vote on the options for salary range increases,” stated the release. “Voters voting ‘No’ and voting on the option caused a spoiled ballot so a second ballot had to be issued.”

Another problem was poor communication at the more remote chapters, who apparently didn’t get the memo that they could issue photocopied ballots once the originals ran out.
“Lack and poor communication at remote sites caused delays in the instructions getting to all polling sites,” it stated.

Polling sites were also instructed to get contact information for all voters who were in line at 7 p.m. but, again, this was not received as quickly in remote sites.

Speaker LoRenzo Bates arrived during the executive session but it’s unknown what he discussed with the supervisors. He did not comment after he left.

“The Board of Election Supervisors responding to these issues have instructed the Election Administration to complete the vote count,” stated the release.

The release also said those who listed their names at their polling sites, who weren’t able to vote, will be allowed to vote at the Agency Election Office. The Election Administration will be contacting those voters who were listed.