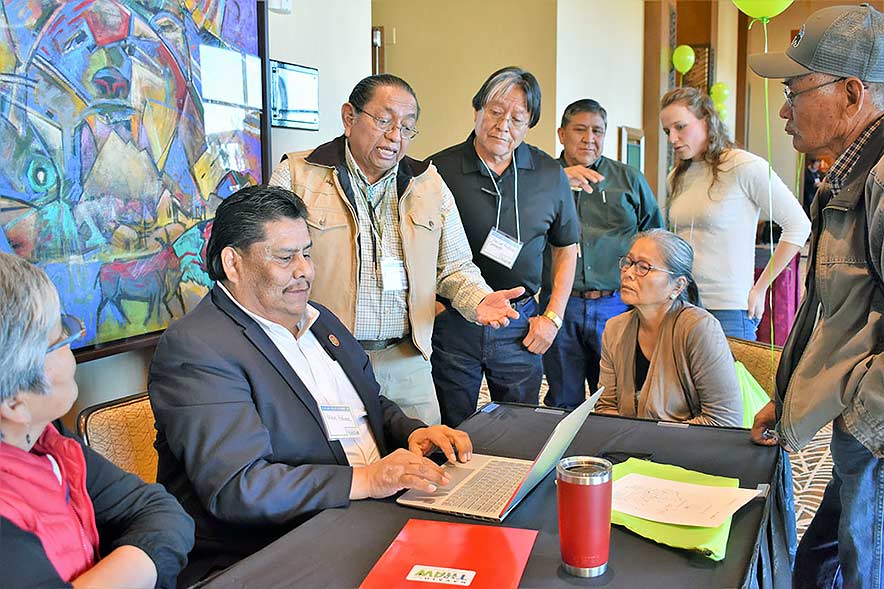 A shared experience of U.S. government overreach in the form of the punitive 43-year development moratorium and economic devastation in the Former Bennett Freeze Area.

Put in place in 1966 under the guise of promoting a resolution to the Navajo-Hopi land dispute, the freeze stretched over 1.5 million acres of land in Western Navajo.

Bodaway-Gap Chapter President Raymond Don Yellowman, who attended last week’s Navajo Thaw Summit, said when he was in college he wondered why the Bennett Freeze had to happen. Then he learned about structural violence.

“My conclusion is that it comes down to energy extraction,” said Yellowman. “To me the Peabody Black Mesa mines, Bennett Freeze, HPL, NPL, and the land dispute are all connected.”

Yellowman remembers his childhood when he and his family would haul live animals up to the Hopi villages and trade with the Hopis.

There was no dispute then, he said.

In 2009, when the Freeze was finally lifted under President Barack Obama, no resources or plans for recovery were attached, so the U.S. government walked away scot-free.

To this day many of the 20,000 or so residents who live in the area are still without water, electricity or adequate housing, infrastructure and access to services.

To survive and raise families, some were forced to relocate away from their homelands without any assistance or compensation.

The Navajo Thaw project, designed to revitalize the area, is a top priority of the Nez-Lizer administration, the Navajo Hopi Land Commission, and U.S. Rep. Tom O’Halleran, D-Ariz.

In his welcome at the Navajo Thaw Summit last Friday, President Jonathan Nez acknowledged that for years, communities have heard promises of help that never materialized.

While numerous economic studies of the region have been done, they have not yielded many results to date, he said.

“Rather than call it the Former Bennett Freeze Area, we should call it the Western Navajo Empowerment Area,” said Nez. “I believe this could be a model for all of the Navajo Nation.

“Here is an area that can be strategically planned and zoned with infrastructure, housing development and economic development,” he said.

Also on board are Native Builders and Building Communities, who were contracted through the Navajo-Hopi Land Office last fall to begin assessments and strategic planning for each area chapter and to set priorities among regional stakeholders.

The Navajo Thaw Implementation Plan is comprised of Phase 1, chapter recovery plans, that have been completed (in draft form), and Phase 2, the Navajo Thaw regional plan, which is the next step, says Brian Cole, president of Building Communities.

According to the Navajo Thaw website, the plan “will leverage the collective power and energy of the chapters to secure federal funding for development on large-scale projects with region-wide impact.”

“For those of you who have lived through the Bennett Freeze, this should never have happened,” said Congressman Tom O’Halleran.

O’Halleran stated that the regional summit begins the process of bringing all of the priorities together in one large collaboration to finally “thaw the freeze.”

“We can’t be shy about righting a wrong,” he stated. “Our objective is making sure the thaw becomes a reality.”

O’Halleran said that part of the need for a comprehensive Navajo Thaw plan is because most people in Washington, D.C., don’t know about the Bennett Freeze and its impacts.

“We have a lot of education to do at the Capitol,” said O’Halleran. “We have to be able to make people understand the history, what people have gone through, and the idea that you can’t do this to your fellow Americans.”

O’Halleran concluded with an open invitation to his office in D.C.

“Our door is always open,” he said.

“Everything that deals with life was stricken by trauma,” she said. “Congress needs to know this.”

She also said a formal apology to the people could go a long way toward helping to heal the region.

She suggested having congressional representatives come out to Navajo for a big meeting like in the old days.

To them she would say, “Please respect the Native people and their ways. Let’s come back, rebuild and apologize to who are still around and address the trauma.”

‘We have to be ready’

The Navajo Thaw project was initially inspired by planning done at Nahata Dziil and USDA Rural Development grant funding received by the chapter whose members wanted to help out their relatives in the freeze area.

“It’s not only about what the area needs now. We need to think ahead 20-50 years,” said Nahata Dziil Commissioner Darrell Tso. “We need to look at major economic development that all the chapters can benefit from.”

Tso said, for example, he can envision a major corridor going from Flagstaff all the way to Four Corners.

“A package will be put together that shows the needs of the former Bennett Freeze,” said Tso. “That will go to the Council to create legislation and then to Washington for funding.”

Cole says the freeze area roundtable that will start meeting soon will be comprised of leaders from the nine affected chapters who will advocate on behalf of their communities and collaborate with regional planners.

Participation in the Navajo Thaw project is not mandatory, said Cole, but to receive benefits, chapters have to participate in the planning process.

“I see this new effort for rehabilitating the communities in the Former Bennett Freeze Area as something that’s being done differently from what’s been done in the past,” said Navajo Nation Council Delegate Thomas Walker.

“By going directly to the people in a more organized fashion and being consistent, the level and quality of engagement is notable,” he said.

Cole says while the chapters will be responsible for advocating for their projects, Native Builders and Building Communities will be there to help get those projects done.

He believes the Navajo Thaw project can be successful, but good communication among all of the participants will be key.

“I think the tribe is making effort to move forward, but it’s going to take a lot of effort by the local chapters to push for their own initiatives such as housing and pipelines and infrastructure, said Justice Beard, dean of students at Shonto Preparatory School.

“I think it’s very informative,” said Guy Horsen from Cameron. “People from Window Rock came out here to share their ideas with the community.”

“I’m interested to see what the water development plans are because water is a critical issue,” said business owner Ron-son Riley Chee from Leupp. “You can talk about economic development all you want, but if you don’t have water it’s a dream.”

Elder George Kee said what brought him to the Navajo Thaw summit was curiosity.

Kee returned home to Tolani Lake from military service in 1967 and found out about the Bennett Freeze when he started building a foundation for a home and a Hopi ranger came to tell him he couldn’t do that.

Kee said at the time he couldn’t believe it because he had just come back from defending the country and U.S freedoms.

He still doesn’t understand why the Bennett Freeze was enacted.

“People were crying out there,” said Kee. “They needed help.”

Years later, Kee said the Navajo Nation promised all the people who had been in the Bennett Freeze area for 30 years houses, roads, water and power lines. He said two presidents made those promises in the 1990s and 2000s.

“Close to voting time, that’s when they really come around,” he said.

Kee came to the summit to hear what the plan is now.

“Is there money there?” he asked.

If not, it’s just a rehash of the same old message, he said.

Some area residents are hopeful that Nez, whose family was impacted by the freeze, will step up to the plate and champion the rebuilding the area, but some are shy of being too hopeful.

“Nez being from Shonto, we’re hoping he’s ‘The Man,’ the person who will, through his own life experience, say ‘I cherish this topic and this is my No. 1 concern for the people,’” said Raymond Don Yellow-man.

Yellowman said that even during the Begaye-Nez administration, there were efforts made to address the freeze recovery, but in the end he didn’t see results on the ground.

He said commitments come and go with changes in administrations.

“People are left on the sidelines just watching and wondering,” said Yellowman. “The politics can be very unstable and uncertain.”

Yellowman said in the past there has also been a lack of accountability with money and resources.

His organization, The Forgotten People, had to go to extreme measures to sue the Navajo-Hopi Land Commission several years ago to demand transparency and records of how funds were spent, but that never panned out.

“Your own Nation is not willing to be up front,” said Yellowman.

After the summit, Yellowman said he still has a lot of questions.

He wonders if the Navajo Thaw project is being structured to be open, inclusive and representative of the people so that everyone feels involved. He also wonders who will administer the funds.

“I think people are curious but basically saying, ‘We’ve yet to be convinced that they’re for real,’” said Yellowman. “We want to see some results before we can really bank on it or believe that this is the real deal.”