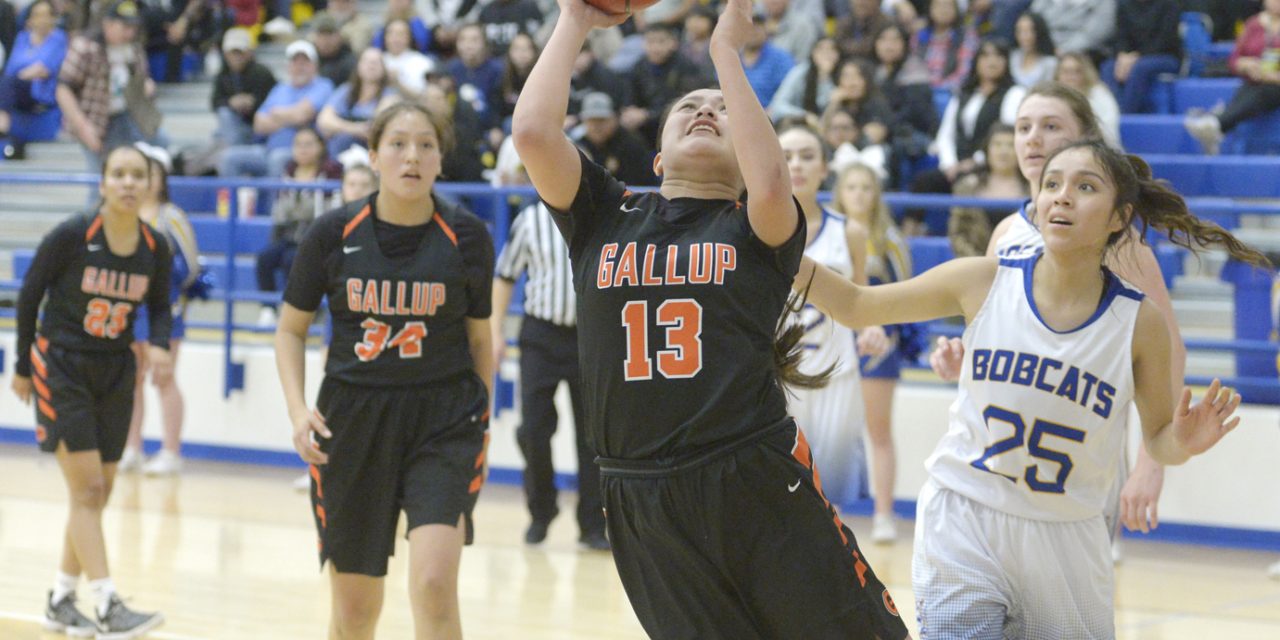 Navajo Times | Donovan Quintero Gallup Lady Bengal Cheyenne John (13) sets up for a shot as Bloomfield Lady Bobcat Madi Bedonie (25) looks on during the District 1-4A basketball game in Bloomfield.

Without their key player in the starting lineup, all the Bloomfield Lady Bobcats could do was not let the Gallup Lady Bengals run away with the game.

Halle Payne, perhaps the Lady Bobcats’ best player, was not suited up at Thursday night’s District 1-4A basketball game. Payne got a concussion last Saturday during a home game against the Kirtland Central Lady Broncos at home. While the team had to endure a dominant performance by the Bengals, head coach Tom Adair said she was OK.

“She got hurt last week against Kirtland  in the championship game but we’ll have her back next week,” Adair said after the game.

But at the start of the game, Gallup took command and never looked back. Gallup’s Jordan Joe and Hailey Long contributed the brunt of the scores in the first quarter that helped their team take a 21-8 lead. The second quarter, Bloomfield fared slightly better, but not enough to handle the Lady Bengals who had no problem getting access to inside the paint where they easily scored.

Gallup led 36-20 at the sound of the second quarter buzzer.

“We put a lot pressure. We turned them over quite a bit,” Lady Bengal coach Todd McBroom said. 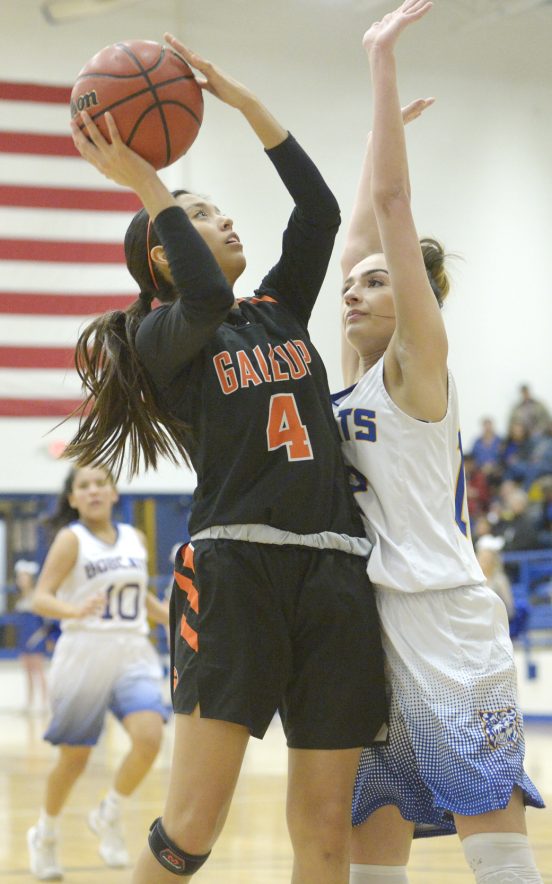 The third quarter Long continued keeping Bloomfield from scoring inside the paint. She also scored 4 of the team’s 14 points in the third. Teammate Justine Tso received a technical, but that did not stop the team’s momentum.

The fourth quarter, Bloomfield had to call for a time out when Gallup began taking control of the game once again.

“Come on! You guys play some defense,” one of the Bloomfield coaches yelled before letting the team get back on the court.

The Lady Bobcats came to life for a brief moment and forced a few turnovers that help them get some points on the scoreboard. Still, Gallup’s dominance of the game helped them defeat Bloomfield, 66-43.

With the win, the Lady Bengals will host the Shiprock Lady Chieftains who defeated top ranked Kirtland Central, 43-40, at home on Saturday at 6 p.m.

“You never like to lose. Especially like that. But give them a lot of credit,” Adair said of the Bengals after the game. “They came out and played really well. Coach (Todd) McBroom is a heckuva coach. They did a good job. I congratulate them on it.”