Fires popping up in spite of restrictions 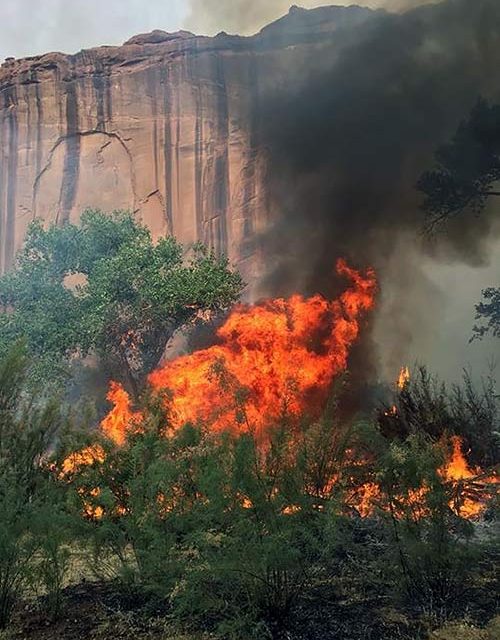 Submitted This photo shows a fire burning in Canyon de Chelly Sunday. The fire, of indeterminate cause, consumed five acres on July 3, 2017. 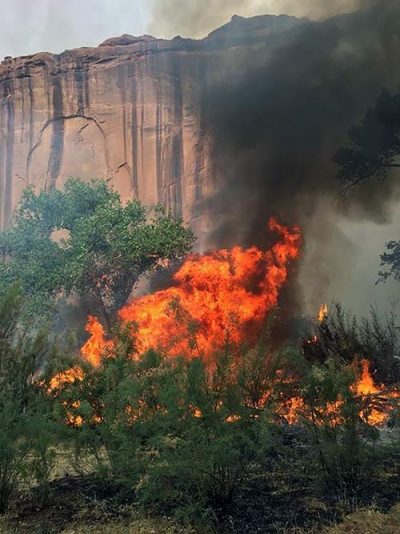 Submitted
This photo shows a fire burning in Canyon de Chelly Sunday. The fire, of indeterminate cause, consumed five acres on July 3, 2017.

In spite of fire restrictions on the reservation, at least six small fires were reported around Gallup and the reservation over the weekend and Monday, according to local fire authorities.

Two fires in Sanders, Arizona, one deliberately set, both threatened structures and a fire of indeterminate cause gobbled five acres on the floor of Canyon de Chelly.

Puerco Valley Fire Chief Cliff Snyder said a fire set by juveniles Friday afternoon consumed about five to six acres of dry grassland and damaged power poles in Sanders, but emergency personnel working together were able to stop the blaze before it reached the White Mesa apartments.

Snyder said crews from McKinley County, Ganado and the Bureau of Indian Affairs, as well as a tanker sent by the Arizona Department of Transportation, collaborated to battle the blaze, “but what really helped was the Apache County Sheriff’s Office.”

Snyder said the sheriff’s office had sent deputies for fire extinguisher training a couple of months ago, and when they heard about the Sanders fire, they were the first on the scene with their pressurized water and foam cannisters.

“By the time we got there, they had a good start on the fire,” Snyder said. “It’s a great example of departments working together, which we’ve had to do lately because none of us have the resources we need to do it ourselves.”

Another fire broke out in Park Estates in Sanders on Sunday when a resident decided to burn trash in spite of Stage 1 restrictions, said McKinley West Fire Chief Rudy Nez, whose department helped Puerco on that one along with the BIA.

“We got called out about noon, so I guess it was burning since about 11,” Nez said, adding that no homes were damaged but the fire took out a water line, an electrical line, a shed, some fencing and a few trees.

Snyder said the wet spring and dry, hot, windy summer have combined to turn the Four Corners into a tinder box.

“The grass grew really tall because of the wet spring, and now it’s lighter fuel,” he said.

Still, the departments can’t seem to convince people not to burn or use fireworks.

“There’s a $5,000 fine, but nobody’s enforcing it,” said Nez. “In McKinley County outside of the towns, there aren’t even any restrictions. I don’t know if the county’s afraid of lawsuits or what.”

Nez said he’s seen no evidence people are even being careful.

“We had one on the side of I-40 that seems to have been started by someone throwing a cigarette out the window,” he said.

Both fire chiefs were understandably nervous about the July 4th holiday tomorrow.

The best thing homeowners can do, said Snyder, is to “give us 60 feet of defensible space around your buildings.”

What is defensible space? “Clear it down to bare mineral earth,” he advised. “No weeds, no debris.

“A fire can’t burn without fuel.”