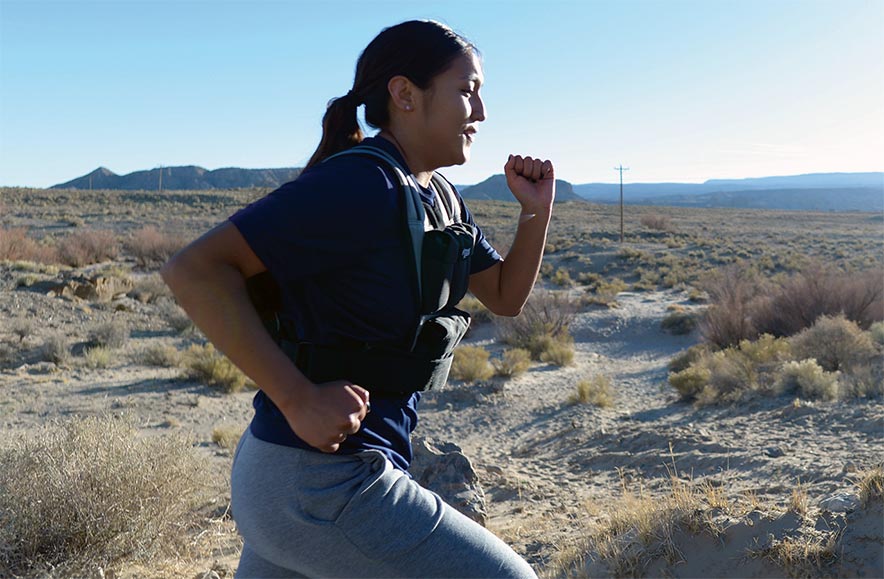 Navajo Times | Donovan Quintero
Jordan Peshlakai runs near her home in Naschitti to prepare for Marine Corps boot camp. She is the first Navajo female to train at the Marine Corps Recruit Depot San Diego, which traditionally trains only men.

She turned 19 the day she stepped foot onto the yellow footprints. Jordan Peshlakai stepped off the bus on Feb. 9 to be the first Navajo female to train at the Marine Corps Recruit Depot San Diego, which traditionally trains only men.

More importantly, she arrived at Receiving Company to be the first in her family to step on the infamous footprints on which every Marine must first step. It was no accident she was chosen to be the first from her tribe to take the Marine Corps to new and uncharted territory.

Her recruiter, Gunnery Sgt. Jesus Fernandez, chose her for her tenacity and willingness. He described Navajo women as being “tough as nails,” which he said Peshlakai is. She’d mesh well with the 59 other young females who signed up to change the antiquated system of training female Marine recruits in only one place while the men had two options.

Fernandez said his wife, Litonya Fernandez, also a Navajo, had to train in Parris Island. She did two tours in Iraq in 2005 and 2009.

Peshlakai didn’t know Rep. Jackie Speier, D-Calif., chair of the House Armed Services Military Personnel Subcommittee, had introduced a bill to integrate male and female training at the Marines’ only two boot camps. She was too busy trying to attract a volleyball scholarship so she could go to nursing school. The bill was signed into law as part of the 2020 National Defense Authorization Act. She also didn’t know the Marine mascot, an English Bullterrier – “Lance Cpl. Manny” – was named after Navajo Code Talker Johnny Manuelito.

Peshlakai only knew the values of the Marines and hers were one and the same. So when she was offered a chance to make Marine history, she jumped in with both feet. But more than a month before she made history on her birthday, Peshlakai stood at the top of a steep rocky road in Naschitti, New Mexico, nauseated from running up and down a hill with a 20-pound vest. She said she was concerned she might not be ready for boot camp because she was still seven pushups shy of completing 60 in under two minutes. By the way, she said she does her pushups with her knees off the deck.

“I started with only being able to do 15 pushups,” she said, smiling. “Gradually, I had to work my way up to do more. “I’m used to doing lunges, squats, calf raises, basically everything I can do with my legs,” she said. “I’m used to it, but I still get tired.” But the running she had down, easily. Two miles in 16 minutes was no problem for her.

During boot camp, her recruiter told her she needed to complete the 1.5-mile run in 15 minutes. She easily cruised the distance in 12 minutes. There isn’t much to do or see in Naschitti other than watch traffic blast down U.S. Highway 491.

Only Badger alums like Peshlakai, who graduated from Naschitti Elementary School, appreciate its allure and emptiness. Peshlakai spent her time diving for volleyballs to keep her team in the game, staying home and caring for her 11-year-old sister, or running and hiking the Chuska Mountains.

Before COVID-19, everyone in the tight community came out to watch the games. Peshlakai’s close-knit family had to stop planning birthdays and holiday celebrations and the annual Angels vs. Drunk Drivers awareness campaigns. “I don’t really mingle now,” said the shy 18-year-old, who added it is hard to do anything these days because of the pandemic. So she put her focus into living the Marine Corps way of life, which had values she already lived by.

“That’s the first thing that caught my attention,” she said, “how it would benefit me and make me become a better person – responsible, respectful and having the honor, courage. “Right there, I have that already,” she said, “it’s in me and I was raised with it. I’m still trying to improve.”

While she was physically prepared, the jitters of flying away from the nest to carve a path for herself were beginning. “I’m feeling nervous about going and leaving my family because I’m very close to my family,” she said. “This is the first time I’ll be away from my family for a while. That’s something I’m not ready for.”

She knew she wanted to make a life for herself, just not as a Marine. Originally, she had goals to play volleyball at the collegiate level. She was one of the top players on the Newcomb Lady Skyhawks team. “I was more focused on getting a volleyball recruitment, going to college,” she said. “I realized the financial part of college, the time, and how much it was going to cost, I knew it wasn’t in my little family’s budget.”

Being a member of the National Junior Honor Society and maintaining good grades seemed not to be enough to help her attract a scholarship.

So, after finishing her high school, she decided she’d let the military pay for college. She told her mom, Tashina Peshlakai. “One day I surprised my mom with it,” she said. “I told her I want to join the Marines. “She’s like, ‘What?’” she recalled. “She was like, ‘You were focused on volleyball. What happened?’ “My mom asked, ‘Are you sure?’ And I said, ‘I am sure.’” On Nov. 6, 2019, when she was just 17, she and her mother went to the recruiter’s office in Farmington and Peshlakai enlisted.

“My mom thought we were only going to ask questions, but she ended up signing the paperwork,” Peshlakai said. “She was like, ‘Wow, I didn’t think I was going to sign my daughter away to the government.’” A month later, in December 2019, she was selected to the Navajo Times Fall Sports All-Stars and made the list alongside other top players like Tuba City’s Jayda Chee and St. Michael’s Kaylynn Smith.

When Peshlakai enlisted, she assumed she was heading to Parris Island, South Carolina, for boot camp because that’s where all female Marine recruits born on the western side of the Mississippi River were sent.

That’s where Navajo Marine Corps veteran Cassandra Morgan was sent. Morgan, who served in the Marine Corps from 1988 to 1994, wondered how the San Diego boot camp was going to separate the female from the male battalions. “Is it gonna be kind of like what they have on Parris Island, Fort Battalion is one side and then you have your other three battalions on the other side, for male recruits?” she asked. “Or are they gonna do it like the Army where they are all gonna live together? That’s what I’m wondering.”

According to Fernandez, the females and males will train together but live in separate barracks. The Marine Corps has been under fire as being the only U.S. force not to have male-female integrated training programs.

Another Marine veteran who graduated from Marine Recruit Depot Parris Island, Elaine Begay, jokingly but with a hint of pride, said, “And those sandy hills don’t have chiggers.” She was referring to San Diego marine recruits’ training conditions and their sand flea-less “Mount Motherf—–r,” the very large hill with steep inclines recruits had to traverse and the series of obstacles known as the Crucible, a 54-hour course they all have to complete before earning the title “Marine.”

Begay not so fondly remembers chiggers, better known as sand fleas, that have been the cause of nightmares for Marine recruits on Parris Island since 1915. She called them “mosquitos on steroids.”

“Imagine a whole bunch of them crawling around all over, eating your face, biting your ears, arms and you can’t slap at them,” Begay said. Another Marine veteran, Tropix Knight, originally from Hard Rock, Arizona, recalled, “You can’t scratch your ankles, oh, my goodness. “Nope! You pay if you hit one of them, you will,” Begay said. “We’re not allowed to kill them.”

Tashina Peshalakai’s phone started ringing on Tuesday afternoon from a California number. She answered and it was her daughter. She thought it would be somewhat similar to a couple of prior calls when Jordan landed in San Diego to begin her two-week COVID-19 quarantine – a nice conversation, like when Jordan told her Marine recruit life was “quite an experience” and how imagining it was “really different from having to experience it in real life.”

“I wasn’t expecting a call from her,” Tashina said. “She caught me off guard. And it was her birthday on Tuesday and that’s when I got that unexpected phone call from her.”

She heard commotion in the background and assumed other recruits were calling home. “It was a real quick, she told me really quick, ‘this is Recruit Peshlakai, Jordan,’ and she gave me a real basic information. “Then she asked, ‘Do you have any questions?’ And, I was like, ‘No.’ I wish I could have said happy birthday to her, but that was it. “And I was like, ‘OK, oh, my gosh, that was an interesting phone call,’” she said.

Jordan Peshlakai is born for Táchii’nii, and her maternal grandfathers are Kiis’áanii. She is expected to graduate on May 7.

Arguably, Peshlakai is not the first to bust down military barriers for Navajo women. That distinction would go to the late World War II veteran Ester Denetclaw, who served in the Women’s Army Auxiliary Corps from 1943 to 1946.