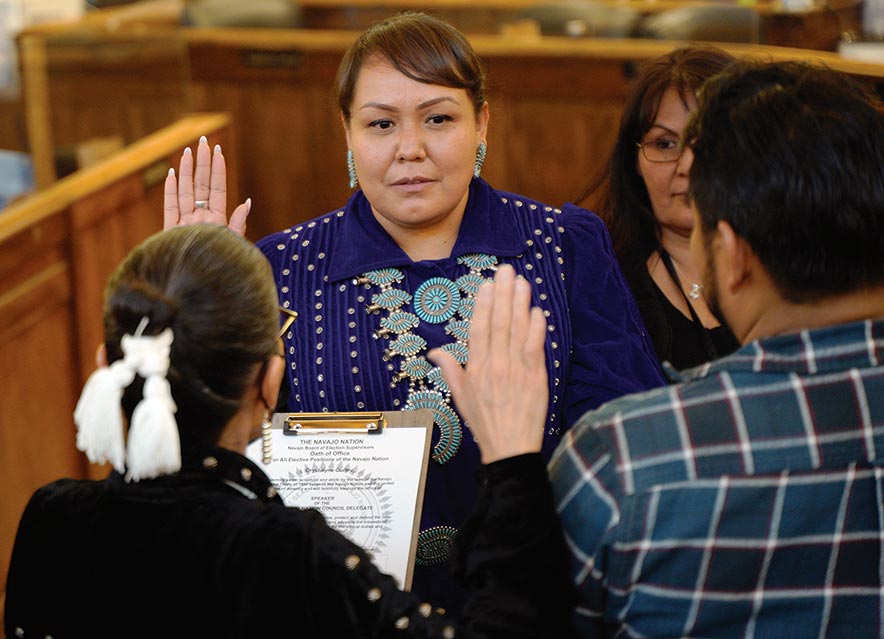 Navajo Times | Donovan Quintero
Council Delegate Crystalyne Curley takes the oath of office to become the first Navajo woman to lead the Navajo Nation Council as its speaker on Monday night at the Council Chamber in Window Rock.

The first-ever woman was elected the 25th speaker of the Council on Tuesday, the first day of the winter session.

The Fish Point, Arizona, native said she has a very high standard to meet.

“Especially following all of my speaker protégés, the ones that came before me,” Curley said, adding that it still “hasn’t fully sunk in.”

Curley said she’s planning to continue speaking from her heart as the new speaker.

“My platform and my priorities really came from the heart of my whole childhood — my life, my experiences, the trauma that I’ve been through, and just really speaking up for everyone,” she said. “Especially as a mother and a grandmother, as an auntie, as a sister. It’s just very emotional.”

Morgan served as the 20th Navajo Nation Council speaker from 2003 to 2011, followed by Naize, who resigned in 2014 after he was charged with 11 counts of bribery. Naize formerly represented the chapters the newly sworn-in speaker now represents. Bates served as the speaker for the 23rd Council.

Curley’s mother, Marilyn Curley, said she was “excited and surprised” by her daughter’s appointment.

“I was just helping her move from the house, and I was so shocked,” she said Monday night at the Navajo Nation Council Chamber.

Marilyn added she was “speechless” that Crystalyne is the first woman in the Council’s history to become its speaker.

President Buu Nygren and Vice President Richelle Montoya were supposed to give their first state of the nation address. Still, they did not because the Council voted to recess early and visited the Chamber. Nygren hugged and congratulated Curley for her appointment, followed by Montoya.

“I think it’s a historic day, a very proud day for the Navajo Nation because not only do we have a madam speaker for the very first time,” he said Monday night.

“It’s just such an amazing day for the Navajo people,” he said of Curley.

Curley took her seat smiling. She took a deep breath before giving her first speech to the Council.

“It’s an honor to be serving you as your new speaker. I am very appreciative for being nominated,” she said. “Nizhónígo ‘áhxíł indádiilnish, and with love and compassion and respect for one another. I just pray for new guidance and direction.

Curley will serve for two years when a new speaker is selected. She did not say if she’d vie for the job again.