Flags at half-mast in honor of Vandever

Flags on the Navajo Nation were flown at half-mast Monday in honor or Navajo Code Talker Joe Vandever Sr., who passed away on Jan. 31 in Haystack, New Mexico, at the age of 96. 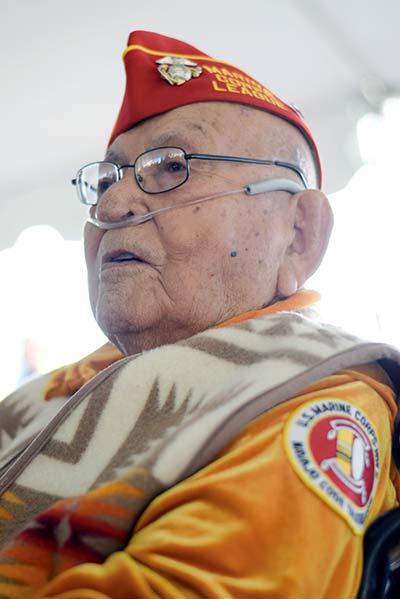 Vandever was born on Feb. 5, 1923, into the Red Running Into the Water People Clan, born for Two Who Came to the Water Clan.

In 2001, he received the Congressional Silver Medal for his service as a Navajo Code Talker in World War II.

The funeral for Vandever was on Wednesday at 10 a.m. at the El Morro Theater in Gallup. The burial will be today at 1:30 p.m. at the Santa Fe National Cemetery.

“Our Cheii and Shimásání (grandfather and grandmother) encouraged us to be the best we can be and to contribute to the Navajo Nation and the world. He stressed the need for each of their 91 grandchildren to speak and value our Navajo language. He said our language and culture identifies who we are and it will protect us and make us stronger. We will greatly miss our grandparents,” said grandson Eric Nez.

President Jonathan New said, “As we mourn the loss of Navajo Code Talker Joe Vandever, Sr., we also honor and remember all his great sacrifices for our Navajo people and the entire country. Our thoughts and prayers are with his family and friends as they lay him to rest this week.”