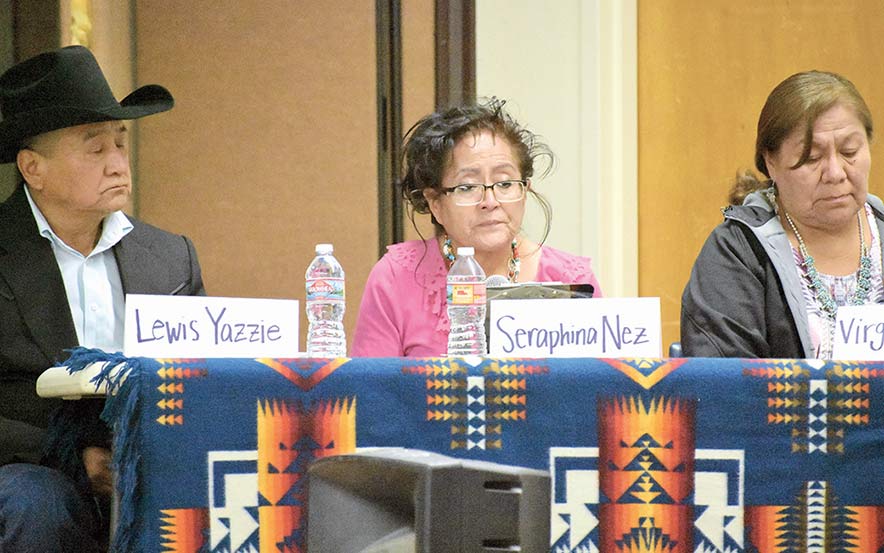 “This is about truth to power,” said an emotional U.S. Rep. Raúl M. Grijalva, D-Ariz., whose father was a miner. “These are the types of stories that need to be heard, that all Americans should be concerned about,” he said.

Grijalva, chairman of the House Natural Resources Committee, came to Window Rock last Wednesday to listen to testimony by Navajo uranium miners, downwinders, and second- and third-generation family members who still suffer the ongoing impacts of uranium toxicity. “You remind us, and we’re going to remind our colleagues, that this chapter is not closed,” said Grijalva. “The book is open. The lives are real. The hurt is real.”

Grijalva said he was moved by Navajo uranium miners who travelled to meet with him in Washington, D.C., last summer as well as the urgency they brought, which led him to come to Window Rock. “We’re here to make sure these voices are heard,” he said. “This is a national responsibility with national consequences that needs a national response.”

“This is a silent killer,” said Marine Corps veteran Leslie Begay. He was among the post-1971 underground uranium miners who worked in the Kerr-McGee mine in Church Rock cutting into fresh ore releasing radiation in confined spaces. The current Radiation Exposure Compensation Act only covers people who worked in the mines from Jan. 1, 1942, to Dec. 31, 1971. He said the radioactive waste spill at Church Rock in July 1979 contaminated whole area and was bigger than the Three Mile Island nuclear disaster, impacting livestock, farming and water wells.

“Someone must be held accountable,” said Begay, who suffers from lung disease and cancer. “My mother died of liver cancer. My whole family has suffered.” Grijalva pointed out that the response to the Three Mile Island nuclear disaster was “huge, overwhelming and long-term” while the response to the Church Rock spill, in terms of resources, was no comparison.

Begay said it’s hard for him to share that he only has two years to live since his lungs are slowly deteriorating. On top of that, he’s had a lot of trouble accessing adequate medical care since there are few services on the Navajo Nation and he has to travel long distances to go to cancer centers where he isn’t even sure he’ll be covered by insurance.

“That’s why we are where we are today,” said post-71 Kerr-McGee underground uranium miner Tommy Reed. “It’s a continuing situation.” Reed said miners like him were unknowingly exposed to high-level radiation to make quotas and they suffered the consequential illnesses.

“There is no cure in modern medicine for uranium exposure,” said Reed. “During my employment I wasn’t informed or trained on how I should protect myself from exposure,” he said. “We were faced with dangers every day without knowing the consequences.” Post-71 miner Walter Marble said in retrospect there was really no way to work in an underground mine and not be overexposed. “By the time we finally woke up and realized what was going on, it was too late,” he said. “Hundreds of people were overexposed.”

Marble added that while he can get treatment at the VA many of his counterparts who go to the Indian Health Service can’t get proper diagnoses and treatments, including medications, for the complex spectrum of illnesses that accompany uranium radiation exposure. “It’s a travesty,” said Grijalva.

“How can we live in harmony and balance when our people are chronically exposed to radiation and our Mother Earth has been exploited and scarred with abandoned uranium mines?” asked President Jonathan Nez in his opening remarks.

According the U.S. Environment Protection Agency, approximately 30 million tons of uranium ore was removed from 1944 to 1986 from Navajo Nation lands, supplying the atomic energy arsenal of the U.S. military in the Cold War era.

Nez noted that the Navajo Nation has 524 known open uranium mine sites, with only 219 of those having funds available for cleanup and remediation efforts. “We won’t know the actual amount of uranium mine waste left behind until remedial site evaluations are completed for all 524 abandoned uranium mine sites on the Navajo Nation,” said Nez. “I have personally heard countless stories from angry and heartbroken Navajo people about how cancer has decimated Navajo families,” he said. “They have every right to be angry and every right to demand justice.”

Nez said he and members of the Navajo Nation Council, including Council Delegate Amber Kanazbah Crotty, have advocated for the former uranium workers, downwinders, and post-1971 mine workers to be included in the reauthorization of the Radiation Exposure Compensation Act by Congress.

In 1990, Congress passed RECA that acknowledged responsibility for the mistreatment of uranium miners and provided for one-time financial compensation to miners with cancer and other diseases related to their mine work and exposure to radiation (up to Dec. 31, 1971). In June 2000, the law was amended.

According to the Congressional Research Service, RECA has awarded over $2.3 billion in benefits to more than 35,000 claimants since its inception, and is scheduled to sunset in 2022. Nez said examples of those who were in indirect exposure including children who played in abandoned mines or mill tailing piles, sheepherders who watered their sheep in open pit mines, women who washed dust-coated clothing of their uranium miner husbands, and people who obtained their drinking water from streams that ran through or near uranium mines. “Because of this, generations of these Navajo individuals and families have experienced abnormal rates of cancer,” said Nez.

While cancer had been almost unheard of prior to the uranium mining, it is now the second leading cause of death on the Navajo Nation, Nez added.

Crotty said that because of the legacy of uranium many relatives are no longer with us. “They left us too soon because of the how the impacts of uranium ravaged their bodies,” said Crotty. “This (compensation) is not a gift from the government,” she said. “It gives them the ability to travel and get the health care they need.” Crotty mentioned the moratorium on uranium mining passed by Council in 2005 as a significant step in recognizing the blight of uranium as a social justice issue. She wants to make sure that uranium is never extracted from the ground again and that a complete cleanup takes place.

“Not only do we need swift action for the RECA amendments, but for the people have been left out intentionally, like our downwinders and our post-71 miners,” she added. “Uranium not only contaminated their bodies, their wives bodies’ and their children’s bodies, but now a new generation of newborns,” she said. “Our homes continue to be contaminated, and our land, our water.”

She said with the cumbersome process, the federal government makes it all but impossible for those impacted to access to the just compensation RECA requires. “In the 1940s Navajo people were recruited to extract uranium for a new and powerful weapon — the atomic bomb,” said Resources and Development Chairman Rickie Nez. “Uranium development on Navajo was entirely used for military applications.”

Those who were engaged contracted lung cancer, respiratory diseases and kidney diseases at a higher rate than the rest of the population,” he said. “Most died early, including my dad.”

He wants to see more comprehensive research done on those living near uranium sites and the health and environmental resources impacts. Most importantly, Rickie Nez stressed, “We need an immediate remediation and restoration plan for Navajo lands to protect future generations.”

Dariel Yazzie from Monument Valley said that when he was young people didn’t understand what uranium was. Nobody told them about the hazards. He and his friends used to play in the uranium tailing piles, he said. He came down with cancer in his early twenties. “Seven decades is way too long to sit with these issues,” said Yazzie, who now works as a Superfund manager for the Navajo Nation Environmental Protection Agency.

“Anywhere else in the country it wouldn’t be like this.” Navajo Nation epidemiologist Ramona Antone Nez Sr. said cancer rates and diabetes rates on Navajo have gone up in past decades and emphasized the importance of conducting long-term studies. Uranium and radon have a long life, she said.

Epidemiologist Del Yazzie said the younger generations are still uneasy about what the future holds. “People still live in homes that were built with materials coming from the mines,” said Yazzie. “A lot of people continue to live in these homes. “They say, ‘What about us?’” he said.

“I feel the federal government has inflicted this suffering upon us,” said 56-year-old Deborah S. Manuelito, a downwinder from Newcomb, who has colon cancer. Manuelito worries about her children and grandchildren. “I need to be here to teach them,” she said.

Navajo language and culture teacher Virginia Jones said she was denied downwinder compensation under RECA, missing the qualification date in 1962 by being in her mother’s womb. “We feel that we were exposed to this dangerous radiation,” said Jones. “Since the beginning of time our elders believed that a baby, right from the start, from conception, was considered a human, unique and sacred — created in the image of the Holy People and embodying all of the elements.”

Jones’ mother and father both died from uranium contamination and she has had thyroid cancer. Jones said she is plagued by coughing, wheezing and heart pain and spends a lot of time going back and forth to doctors.

“My family was never informed of the toxic poisons of uranium mining near our home,” said downwinder Seraphina Nez from Blue Gap-Tachee, Arizona. “The exposure caused illnesses and death of my younger siblings. Mine workers brought contamination into their homes and drank contaminated water.” Nez said her children afraid to have kids because of what they’ve seen. She is exhausted from sharing the same story over and over with little change, she added.

“I feel like, ‘What more can we say? What more can we do?’” said Nez. Lewis Yazzie, downwinder from Monument Valley said he, like many others, often wonders, “Is it my turn?” All of his siblings have had illnesses, heart attacks, or strokes, he said. Miner and activist Phillip Harrison, Jr., lost his father to lung cancer at 44. “It’s been a long struggle,” he said. “We’re asking for justice. We have been very persistent and patient.”

Former President and Chairman Peterson Zah said 35 years ago the first group of uranium miners received compensation “on this same stage” at the Department of Diné Education. At that time, Zah said he thought the payments would continue until everyone was compensated.

“How wrong was I?” said Zah. “Thirty-five years later we’re still trying to resolve the issues.” Zah recommended codifying mandatory tribal consultation into law instead of having it be an optional policy. He also suggested that the U.S. EPA give the authority for remaining uranium cleanup back to the Navajo Nation. “We need those jobs and the money to clean up those sites,” he said. “We can do it for ourselves.”

Grijalva said upon returning to Washington he will go back to the chairmen of the House Judiciary, Energy and Commerce, Education and Labor committees to share what he’s heard. “I think this issue transcends the partisanship and I have to make sure it stays that way,” he said.

He plans to champion reauthorization of RECA and proposed amendments, including extending the period of compensation to 1990 and expanding proof of residency to include general tribal membership. Grijalva also will work on making tribal consultation required by law to help improve collaboration and facilitate conflict resolution, he said.

He believes the Centers for Disease Control and the EPA need to do an extensive health study around the uranium miners and sites so that the excuse that there is no data can no longer be used. Finally, he agrees that a detailed analysis of what it would take to implement comprehensive cleanup, remediation and restoration on the Navajo Nation is needed.

“My commitment and my pledge is to work really hard,” said Grijalva, “to bring equity, fairness, and justice to Navajo people.”