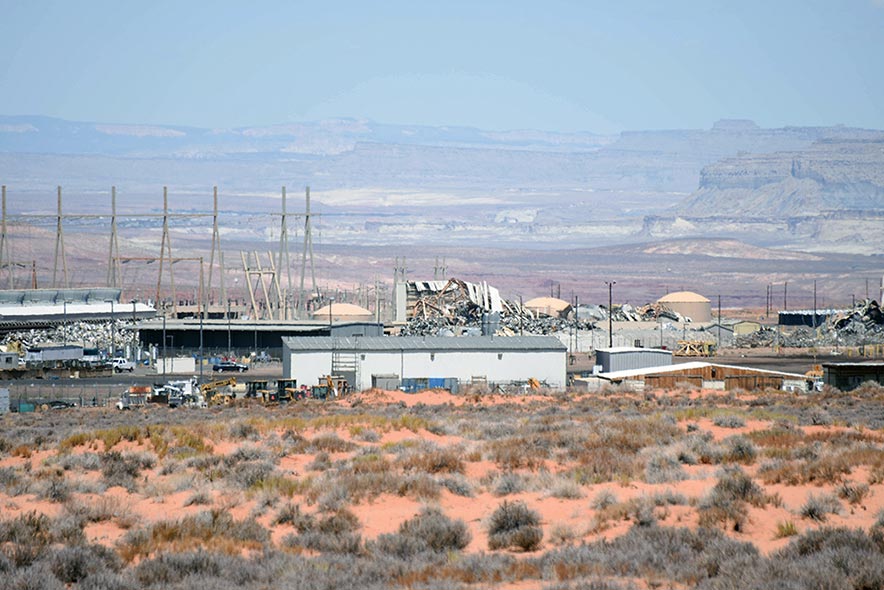 What people could see of the Navajo Generating Station from State Route 98, which links Shonto and Page, is gone forever.

Blasted to piles of rubble were the Three Sisters (units 1, 2, and 3), the concrete-and-rebar pillars and pedestals, the boilers, scrubber equipment, electrostatic precipitators, brine concentrators, coal yard, and the power block.

For many NGS employees, also blasted away were jobs and a 45-year history was erased.

Each unit had a turbine and each had 14 pillars supporting its respective three pedestals, said George Hardeen, spokesman for NGS.

Gary Barras, SRP’s director of major projects and the NGS Decommissioning and Demolition Project supervisor, was given the honor of detonating the final explosion of the Unit 3 pedestals on June 17.

On the one hand, Barras said SRP, along with prime contractors and subcontractors, is working hard to properly turn the NGS site back over to the Navajo Nation following all obligations.

Barras said he was also thinking of the countless men and women who designed, built, maintained, and operated the power plant for nearly five decades.

“I want to do this in honor of those guys and women and the work that they did,” he said. “I want to really pay tribute to those who cared about NGS through the years and say thank you to them.”

Barras estimates that most of the demolition work will be completed a year from now. But that doesn’t mean the project is over because there is still work to be done.

Barras said a contractor will come in this summer to begin earthwork.

“There are those numerous evaporation ponds, which of course are all empty now,” Hardeen explained. “Draining everything is the first process of decommissioning a power plant.”

The cost of decommissioning NGS is around $150 million, according to SRP. Based on initial studies, SRP officials estimate that more than 90% of the decommissioned plant will be salvageable.

The building housed all three turbines and the control rooms where power was made, said Hardeen.

“The turbines were at the 40-foot level,” Hardeen said. “But the building went up much higher than that. The demolition of that is happening very fast because that is just steel girders; and metal sheeting on the outside did not need to be demolished with explosives (because) this is the kind of thing that big excavators can basically tear down.”

Hardeen describes the debris from the demolition as a “mountain range of twisted metal,” which needs to be processed or cut into manageable sizes so it can be loaded onto 18-wheeler trucks and transported to recycling facilities.

Any wastewater generated by plant operation activities was put into large evaporation ponds – as part of the system to capture and regulate wastewater flow – to accomplish zero discharge.
Those evaporation ponds are still on-site and awaiting disposal by a contractor specializing in that kind of work.

“The lease agreement with the Navajo Nation provides five years to get everything completed,” Hardeen said.

During this time, better known as “NGS retirement,” SRP must remove NGS and restore the surface of the site under the provisions of the extension lease between the Nation and SRP; Arizona Public Service; Tucson Electric; Nevada Power; and Los Angeles Department of Water and Power.

The NGS site remediation period begins after that date, and it will continue through Dec. 22, 2054. But some site remediation may occur during the retirement period, according to the extension lease.

The NGS Decommissioning and Demolition Project took a brief pause last year because of the coronavirus. After a nearly four-month suspension, the project resumed in July 2020 with the demolition of the Unit 3 absorber pumphouse and the 10-story-high limestone preparation conveyor.

Barras said regardless of the work suspension from March 27 to July 26, 2020, the demolition contractors made up for lost time and the demolition phase is back on schedule.

All on-site electrical power was supplied by output from the three units except about 200 megawatt-hours a year from the 230-kilovolt switchyard that came from the hydropower generated at Dá’deest?’in Hótsaa or from Tódinéeshzhee’. It was used for emergency backup power to the units and the lake pump station.

The 500-kilovolt switchyard (Moenkopi Switchyard) was used to transmit the plant’s electrical output to NGS participants. It was controlled and operated by APS.

SRP officials said the demolition work is right on schedule. But once the NGS site is reclaimed and reseeded, SRP will continue to monitor it for 33 more years, according to the 35-year extension lease term.

“That will be environmental monitoring because what we see will be gone with the exception of a few buildings that (have) been selected by the Navajo Nation,” Hardeen explained. “SRP will continue to do monitoring for any kind of change.”

The Navajo Nation retained assets including the Black Mesa and Lake Powell Railroad that goes to Peabody Western Coal Company’s twin silos in Klethla Valley near Kayenta Mine; the administration, maintenance, and warehouse facilities; and the lake pump station.

These buildings were constructed in the mid-1990s as part of the scrubber project and they are in excellent condition, said Hardeen. 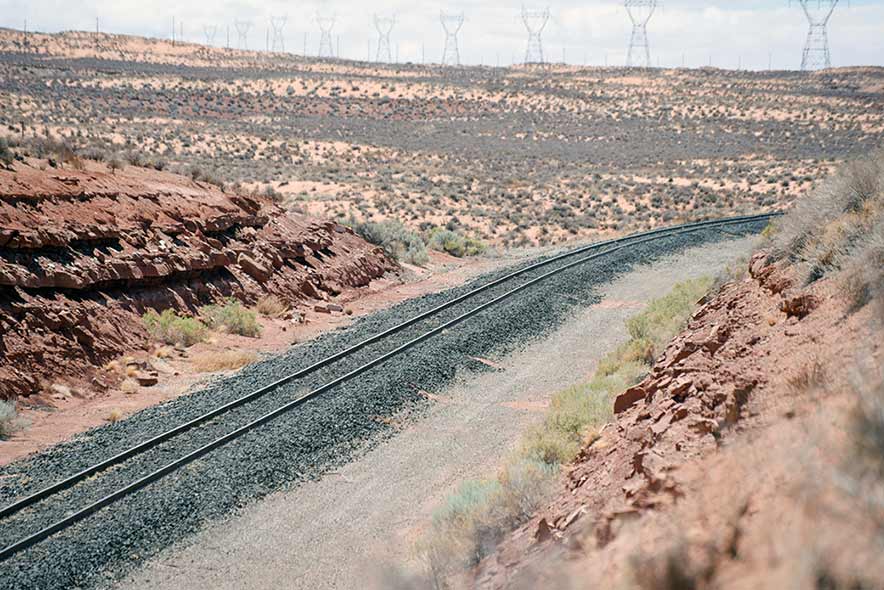 Navajo Times | Krista Allen
This is the remains of the Black Mesa and Lake Powell Railroad near State Route 98 in LeChee, Ariz. The catenary line that powered the railroad was removed during the first phase of decommissioning. The 78-mile long railroad is now under the jurisdiction of the Navajo Nation.

President Jonathan Nez said plans for the retained assets are currently underway. The plans include developing the railroad into a waterline for agriculture and farming; transforming the warehouse into a tourism hub for businesses; and transforming the administration and maintenance facilities into an economic development opportunity.

“And the lake pump (station) for the waterline upon the railroad,” Nez told the Navajo Times, “and water for LeChee and surrounding communities (in Western Navajo). (This) may include the Western Navajo Pipeline.”

The assets are now the property of the Navajo Nation, according to the lease agreement, which states that the railroad and related facilities have a replacement value of about $120 million.
The lake pump station, its suction piping, discharge piping to the plant metering pit, electrical distribution lines from the switchyards have a value of about $41 million.

The NGS participants paid nearly $19 million to the Nation for cost savings associated with not decommissioning those facilities and paid $3.6 million to fund a solid waste disposal program.

The extension lease provides payments totaling about $110 million to the Nation. It allows continued access to the site for decommissioning, long-term monitoring, and ongoing operation of the transmission system.

The NGS participants will pay the Nation’s share of operations and maintenance costs at the station for 10 years, at a projected value of $5 million.

This month’s implosions are the final blasts at the NGS site after the plant went offline in November 2019, when SPR permanently shut down all three units.

The three, reinforced concrete stacks were built in the mid-1990s to replace the three original NGS stacks as part of the NGS scrubber project to remove sulfur dioxide from NGS emissions.

NGS Unit 1 and Unit 2 electrostatic precipitators were demolished in mid-January 2021.

All three precipitators were original to NGS. They removed 99.5% of fine fly ash from the flue gas before it could be discharged from the stacks.

The plant’s three, 20,000-ton, 245-foot-tall boilers (and support structures) were demolished in early March. The demolition of the boilers was the most complex demolition because of the amount and mass of the steel in the boilers, according to SRP.

“This is why NGS is being demolished right now because it is on Navajo land,” Hardeen added. “It has to be returned in as natural a state as possible.” 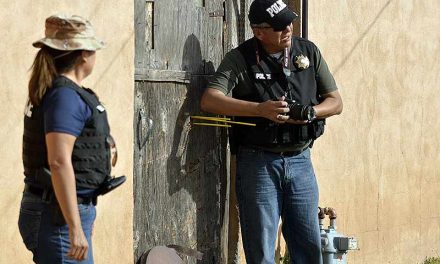 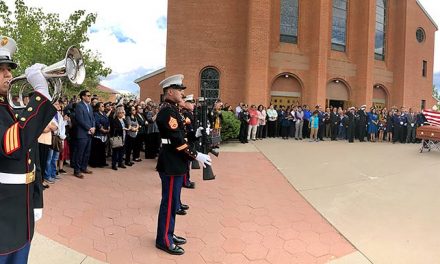 Family of Pinto: Thank you for giving him water, food 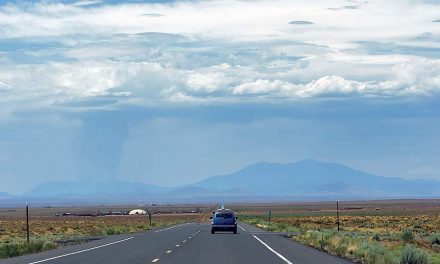