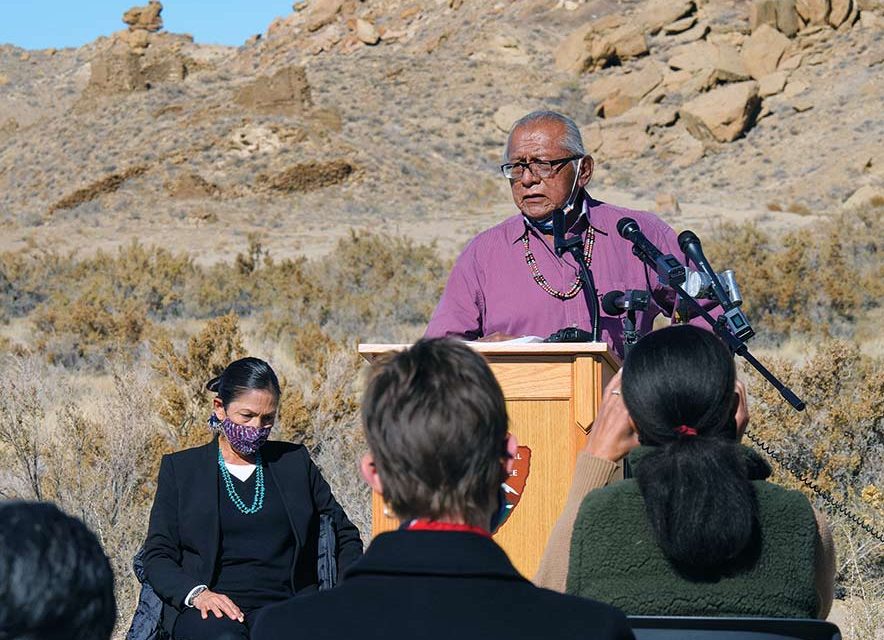 Federal officials are beginning the process of sealing a 20-year moratorium on new oil and gas leases around the Chaco Cultural National Historical Park.

Interior Secretary Deb Haaland on Monday visited the park to celebrate President Joe Biden’s Nov. 15 announcement fossil fuel drilling will be banned within a 10-mile radius around the park.

“We’re here because President Biden and I heard your voices and are taking important steps to take care of our land, our air and our water,” said Haaland, Laguna.

Haaland was joined by several Pueblo leaders, U.S. Rep.s Teresa Leger Hernandez and Melanie Stansbury, and Delegate Daniel Tso, who was the only Navajo official in attendance.

Haaland said seeing the stones her ancestors used to build the kivas reminded her of her grandmother’s home in Mesita Village.

“The love wells up inside me as I’m sure it does with all of you, the responsibility that we all have to our future generations to take care of our American heritage,” she said.

Haaland said protecting the park would ensure visitors from around the world would continue experiencing “the wonders within.”

“And families living in this area will know the Department of the Interior is consistently working to ensure that families can breathe clean air,” she said.

Etta Arviso, who didn’t attend the event, wrote in an email on Friday that she has an allotment inside the boundaries of the Chaco Canyon park.

“What is not talked about is how the Chaco park service chased out our great grandpas and grandmas out,” Arviso said.

Their lands, Arviso wrote, were fenced in the park and never given back to the Navajos who were chased out.

“I myself have my paperwork on that land inside Chaco park,” Arviso said. “Ask the people for their allotment numbers.”

Arviso said the buffer zone would keep families living within the proposed radius from getting any services, such as water or power lines.

“Our people have every right to have better service,” she said, referencing the 1868 Treaty. “Our Diné people’s rights are not being respected.”

Chavez said on Sunday he and several other allottees would be greeting Haaland at the park entrance.

An outspoken leader of his community since the 1970s, Chavez, who’s been involved with oil and gas since 1980, said it started when then-President Russell Begaye made a commitment to Sen. Martin Heinrich and Sen. Ben Ray Lujan in 2019 during a meeting in Alamo.

Allottee Delora Hesuse from Nageezi, corroborated Chavez and said she asked Begaye why he was making decisions on behalf of the allottees.

“He didn’t really have no idea how to help the allottees because I asked and he just sat there,” Hesuse said.

Hesuse said when Interior officials asked Begaye questions, she said the president simply told them not to hurt allottees and the Navajo Tribe.

“And from there they just went on and whatever the Navajo tribal government said or the president, that’s what they went with, even the Pueblos without even getting with us,” Hesuse said. “It felt so wrong, you know, why were they doing all this making all the decisions?”

In 2019, Hesuse told the House Committee on Natural Resources, Subcommittee on National Parks, Forests and Public Lands during a discussion on the Chaco Canyon Heritage Area Protection Act, that many individual Navajos own private lands and the minerals underneath them.

The federal Indian Minerals office in 2015 distributed $96 million to 20,835 allottees, which helped them feed, shelter, clothe and protect their families, said Hesuse.

During her testimony, she told the committee she had a petition signed by 131 allottees to oppose the proposed buffer zone. She also gave the committee a separate petition stating environmentalists did not speak on their behalf.

Around the same time, the money was distributed to allottees, the Begaye administration began having concerns when the Bureau of Land Management approved over 100 fracking wells.

By 2017, the number of approved wells was more than 365. In February 2017, Begaye sent a letter to BLM’s Farmington field office asking to place a moratorium on “fracking-related activities.”

“I am concerned that the increased surface activity from drilling is interrupting the daily lives of Navajo people who live in the Navajo Nation chapters such as Counselor, Nageezi, Torreon, and Ojo Encino,” Begaye wrote, adding that the drillings encroached on the park and threatened cultural and historical sites.

A moratorium, which was included in a spending bill, was signed by President Donald Trump last December. The signing of the bill protects Chaco Canyon for a full year.

Chavez and Hesuse say the moratorium has placed allottees in financial straits.

Chavez said last week the fight wasn’t over for allottees.

“There are other things we can take a look at,” he said.

The next step for the BLM is to publish a notice in the Federal Register that will begin a two-year segregation of the federal lands while the agency conducts an environmental analysis and seeks public comment on the proposed withdrawal.

Haaland concluded her speech by saying the moratorium was just the beginning.

“This is a tremendous day, and I hope that all of you can go home and share the joy with your families and your friends,” Haaland said. “It’s the beginning of something really amazing – an opportunity for so many of us to work together. And I couldn’t be happier.”