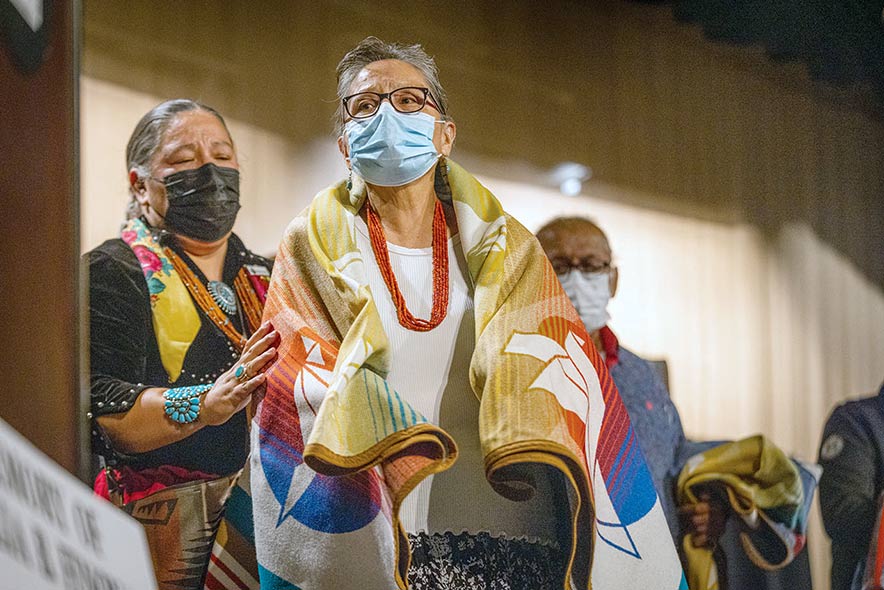 She envisioned happiness, optimism, and hope, ultimately putting Hózhǫ́ǫ́jí into the hearts of anguished mothers, grandmothers, and fathers.

So, Leandra Yazzie from Blue Gap, Arizona, created a design encapsulating her vision.

She drew a sun that beamed sun rays meant to bring good healing. In its midst, she drew dancing birds to signify a renewal of tranquility. Four of the birds, enshrined in a circle, would bring balance, hózhó, and healing. And the color red, which seems to have been woven throughout the blanket, would represent the missing and murdered Indigenous relatives.

Known as the Healing Blanket, Yazzie’s creation, as part of raising awareness of people who’ve been missing or murdered, provides an opportunity to heal.

On Friday, Yazzie and her sponsors, Cellular One and Pendleton Woolen Mills, a family-owned business from Portland, Oregon, presented the blanket to families grieving or searching for their loved ones.

Before Yazzie spoke, she had a chance to hear the plights of all the families seeking solace and the truth. She heard mothers and fathers, grandmothers, and sisters, release the anguish they’ve been experiencing since losing their loved ones.

She did not anticipate the weight of the pains the families carried with them.

Yazzie had a chance to explain what she hoped her creation and design could do for the families.

“I know it’s hard,” Yazzie’s voice quivered on Friday night. “But when you see that light, hopefully, you feel uplifted.” 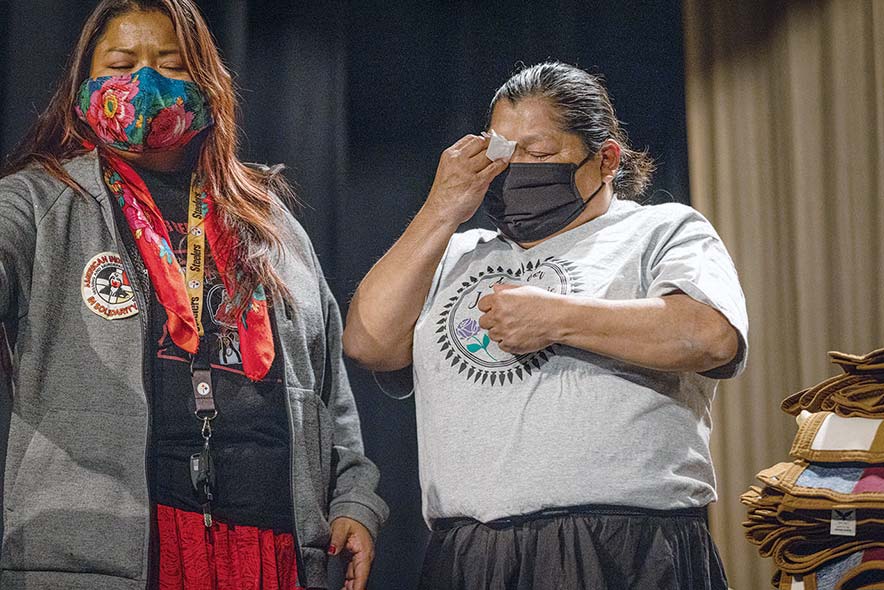 Ethelene Denny, the mother of Jamie Lynette Yazzie, wipes her tears during the Healing Blanket Ceremony Friday Night at the Navajo Nation Museum in Window Rock.

According to a Cellular One press release, the blanket is a special artist edition made to help raise funds for the Navajo Missing Murdered Diné Relatives, a nonprofit organization. The proceeds from the blanket sales will be donated to MMDR.

The event was held at the Navajo Nation Museum auditorium in Window Rock. The small theater quickly filled. Families brought posters and large photographs of their loved ones and placed them on the stage next to a table stacked with the blankets.

Alongside the MMDR logo, families placed images of their missing and murdered loved ones that seemed to stare out at the audience. Just about all of the posters had messages of justice and MMIW written on them.

Yazzie sat amongst the crowd and watched as each family walked onto the stage to accept a blanket with her design. She listened to their cries silently.

The family of Jamie Yazzie, who was last seen in Piñon, Arizona, on June 30, 2019, accepted a blanket. According to the FBI, Yazzie’s remains were found in November of last year on the Hopi reservation. A suspect has since been arrested in late July.

Yazzie’s grandmother, Mary James from Piñon, spoke to the crowd about her granddaughter Jamie. She spoke in Navajo and said she’s been affected by her murder.

James shared her frustrations and highlighted the limitations of law enforcement and jurisdictional issues that have long plagued the reservation.

This year, the FBI created a website to broadcast how many Indigenous people are currently missing in New Mexico and the Navajo Nation. To date, they’ve compiled a list of 202 people, which began with 177 in July.

While the list’s creation has slowly been sputtering to life, for families like Jamie’s family, its progression continues to frustrate them. James recounted a conversation with Navajo Nation President Jonathan Nez a few days after Jamie went missing.

She said she saw Nez leading a parade of law enforcement who arrived to begin a search for her granddaughter. She asked the president if he could help them find her.

After she pleaded with Nez to help them, she said Nez told her it was not up to him.

She said she reminded Nez he was the leader, law enforcement worked for him, and he had the power to make things happen. After her pleas, she said nothing more happened for them.

Jamie Yazzie’s case not being handled in a manner acceptable to their families is not uncommon. Pamela Foster, whose daughter Ashlynne Mike, who could have been graduating from high school in spring 2023, said she wished she did not have to be in attendance.

“I wish I didn’t have to be. It’s really sad the way that we all have to be here because we all know someone that we have lost,” Foster said. “And we all have family members who are missing or who have been murdered. So, I never wanted to be part of this. But unfortunately, I come from a family who’s had a lot of traumas.”

Foster told the audience she lost her mother a few months before graduating high school.

“They have not found the person who committed that heinous crime to this day. I hope that one day I’ll be able to have that energy to be able to start looking into her case,” she said.

Of her little girl, Foster said “six years, six months, and 17 days” had passed since she last saw Ashlynne, who was sexually assaulted, strangled, and bludgeoned with a tire iron before left to die not far from the Shiprock pinnacle in May 2016.

“The last thing the children all remember is that they got on the bus, and she waved goodbye to her dad and said, ‘I love you,’” Foster shared.

Tom Begaye Jr. abducted Mike, 11 at the time, and her 9-year-old brother on May 2, 2016. Begaye is serving a life sentence at a federal prison for her murder and the abductions.

When her children were abducted, Foster said the tribe did not have 911, did not have enough police officers on duty, and did not have sufficient cellular connectivity for an Amber Alert system.

“All of those were hurdles we had to face when my children went missing,” she said. “There were two police officers on duty that day, which made looking for my children extremely hard.”

The nightmarish ordeal spurred Foster into action. She began speaking to political leaders at the local and national levels.

Through her advocacy, Congress passed the Ashlynne Mike Amber Alert in Indian Country Act, which was signed into law by President Donald Trump. The law enhances the training and technical assistance that tribes may receive. It also paves the way for tribes to access state Amber Alert plans and allows tribes to integrate their Amber plans with those of the state or region.

The Navajo Nation Police Department has since hired a police chief. While 911 and addressing, as well as broadband connectivity, continue to hinder the tribe, the police’s Facebook page has been used to share information that includes missing-person police posters and information about the missing person.

This year, Navajo police have found 36 people, one as young as eight months old. While it highlights a proactive and positive step for the department, they have also identified nearly 20 people who continue to be missing. The most recent missing person police shared was on Jerrissa Mae Harris, which they posted on Tuesday. By Wednesday, police wrote “LOCATED” across her photograph, indicating she’s been found.

Harris marks the 37th person found or located by Navajo police in 2022.

Overall, 77 people in the Navajo Nation continue to remain missing, according to the Navajo police. Their list includes 28 females and 49 males.

The list Navajo police have is shared with the FBI, who have added the names to their list. Most of the people the FBI identified as missing have been compiled from other law enforcement agencies.

The family of Zachariah Juwaun Shorty was also in attendance.

Shorty, 23, at the time of his murder, was shot to death. According to the FBI, he was last seen alive on July 21, 2020, in the area of Journey Inn in Farmington. His mother, Vangie Randall-Shorty, who’s become her son’s staunch advocate, said she’d continue being his voice and would never stop seeking justice for him.

Randall-Shorty said on Friday during the Healing Blanket ceremony she never imagined she’d experience losing her child to murder.

“I just encourage each and every one of you to keep fighting for your loved ones,” she said.

She shared the moment she learned of how Zachariah died.

“When Zach––I was lost, and I was so devastated when I was told he was murdered. Zach died of multiple gunshot wounds. To this day, an arrest has not been made, and as his mom, I’m going to continue fighting for him and being the voice,” Randall-Shorty said as she struggled to maintain her composure.

Randall-Shorty has carried signs and banners in all of the tribal fairs this year in hopes of obtaining any information that would aid in the capture and arrest of her son’s killer or killers. The FBI is offering a $10,000 reward.

After nearly five hours, Leandra Yazzie grappled for words as she attempted to describe her experience.

At the same time, Yazzie said the family’s resiliencies and strengths inspired her.

“The strength of people coming together creates one loud voice,” she said.

Yazzie said when she was approached, she knew the healing blanket would begin as a rug. Growing up with her grandmother, her aunt, and other Navajo weavers, she knew it would start as a rug.

For her, the design, the symbolism behind the sun, the sun rays, and the birds all represent healing, a Hózhǫ́ǫ́jí that she hopes can help the families she heard on Friday.

“It’s a little piece of Navajo, our culture in that design,” Yazzie said. “They’ve been through so much. This has to be uplifting.”

And to the families, she told them, “I hope you guys find peace.”

Pendleton has given no exact date on when the healing blankets will go on sale.

Anyone with information into Shorty’s murder or on any missing person is encouraged to call their local law enforcement agency, or the Albuquerque FBI office at 505-889-1300, the Phoenix office at 623-466-1999, or any of their 54 other field offices located throughout the country.