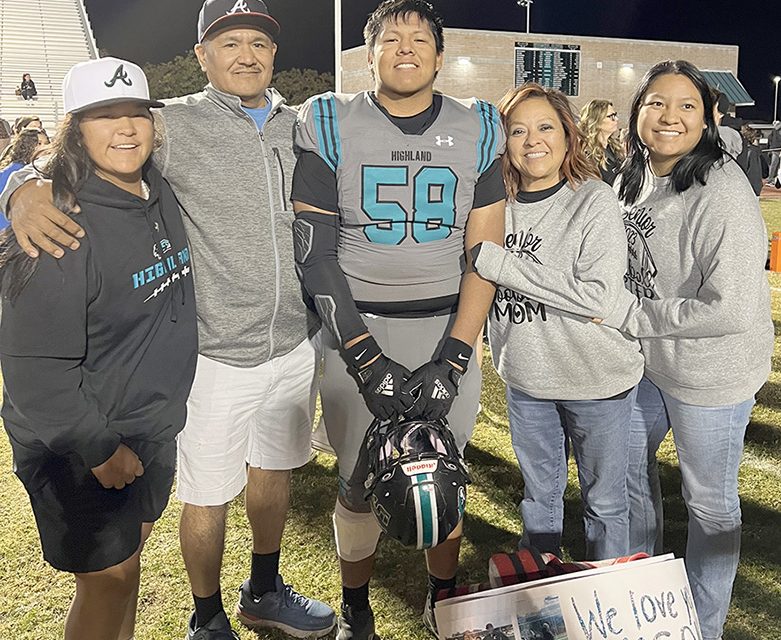 Courtesy photo
Mason Lister, who has roots in the Page, Ariz., area, is the starting nose tackle for the Gilbert Highland football team. The Hawks earned the No. 2 seed in the 6A bracket and host No. 7 Salpointe Catholic at 7 p.m. tonight.

The Gilbert Highland football team garnered the No. 2 seed in the Arizona 6A playoffs.

The Hawks (7-3 overall) will host No. 7 Salpointe Catholic tonight at 7 p.m. with Diné player Mason Lister having a starting role.

“I really like playing for this team, and our success comes from all of our coaches,” said Lister, who is originally from the Page area.

“It’s way different down here,” he said of the opportunity he’s gained playing for the Highland football team. “We have offensive and defensive coordinators that really help us prepare for each game.”

Lister has been part of the program since his freshman year. He made the varsity team at the tail end of his sophomore season, and last year he was deep in the depth chart as he wasn’t able to get that much playing time.

“I was kind of disappointed, but that was my motivation,” said Lister, who starts at nose tackle. “It motivated me to start every game this year. I wanted it more than anybody around me for my position.”

Highland defensive coordinator Jason Lyons said his pupil had to wait his turn as last year’s squad was full of talent, with the Hawks winning the 6A state title.

“I saw his potential right away as a sophomore,” Lyons said. “One of the biggest challenges Mason had wasn’t necessarily in football; it was in the classroom. He’s worked extremely hard to improve there and correct that.

“He’s become quite a strong student in that time,” he said. “The football potential was always there. It was just about finding that consistency.”

Lyons said he’d noticed a big difference in Lister’s work ethic in the latter part of his junior year, which helped him earn a starting spot.

“He showed up every day, and he’s really become a leader for our other kids through example,” he said. “I’ve called him our Tasmanian Devil because he just creates havoc on the interior in a way that we haven’t had many kids do that in years.”

Lyons said his pupil had been the best defensive lineman this year. Through nine games, he’s tallied 17 tackles, with 14 of those assisted.

“His production on the field speaks for itself,” Lyons said. “He does a good job of capturing that consistency that he’s been working toward. He’s a kid that is going to bring it to every single play.”

And while the Hawks have earned one of the top seeds in the 6A division, the defending state champs were hoping to make the Open Division bracket. Since its inception in 2019, the Arizona Interscholastic Association has pooled the top eight teams from the 4A, 5A, and 6A conferences and put them in one state championship bracket based on computer ranking systems.

“I think we’re good enough to compete with teams in the open division,” he added. “Unfortunately, we’re missing it by one game every year.”

Farrel said the next best thing they can do is defend their 6A state title.

“That is what is in front of us, so we’re gonna try to win the games that are in front of us,” he said. “I like our chances, and I think we’re playing really well.”

“We should have made the open,” Lister chimed in. “We deserved to be there, and we want to show that they messed up, not putting us in the open bracket.”