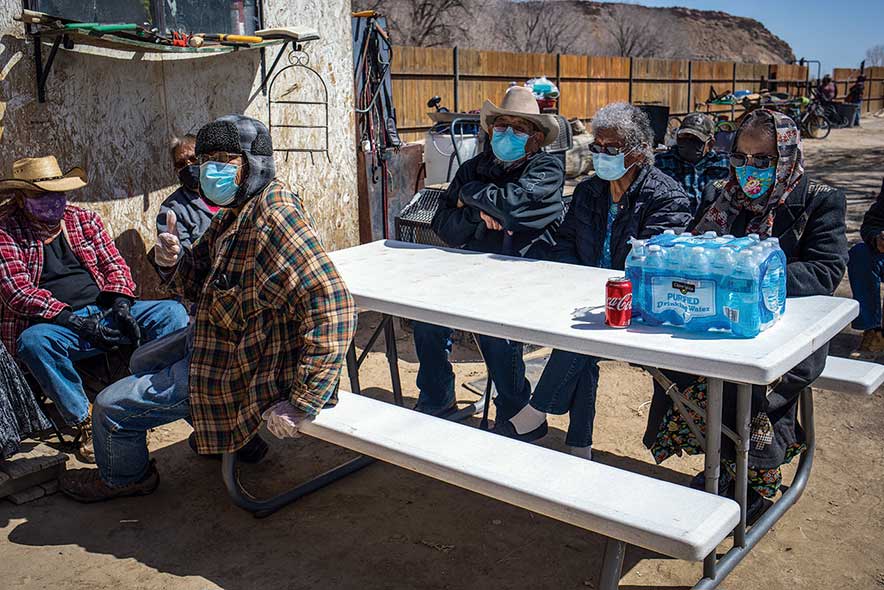 Navajo Times | Sharon Chischilly
Farmers who leased Dineh Benally their farm plots to grow cannabis invited local media to a press conference Tuesday to tell their side of the story. The farmers believe they were treated unfairly by police and the tribal government.

After the San Juan River Farm Board voted to cancel 32 land-use permits on March 16 because permit holders allowed illegal hemp/marijuana activities on their assigned areas, farmers held a press conference Tuesday to decry what they saw as an “overreaction” and to maintain their innocence.

“I’m an old lady and I had a farm … I’ve been a farmer for over 60 years,” said former farm board member Jean Jones. “People are trying to say they are going to take our farm away. I don’t know why they saying things like that. The Navajo Nation didn’t give it to us.” Jones and other farmers also spoke out against harassment from neighbors.

At one point, the elderly Jones said those who are against hemp/marijuana cultivation threatened to beat her and threw rocks at her. “Now there are a lot of protesters going around,” said Jones. “They’re trying to harass us. Every time I go out, they ride by and they yell at me, ‘Go to Hell!’”

During the 2020 summer of upheaval in Shiprock, protesters not involved with hemp (or what authorities say was later found to be marijuana) clashed with those who were actively farming hemp/marijuana.

“How do they know hemp was being grown or not being grown?” she asked. “The plants were never tested before they killed them. The Navajo Nation has overstepped its authority.”

Farmer Grace Chavez said from her understanding they were growing hemp and, like Mesa, she maintains that belief. She said her farm sits in the back where it is out of sight from the road, and after it was shut down equipment went missing. “I can’t believe some of my friends and coworkers,” said Chavez.

“The thing they said, racial discrimination against the Asian people on Facebook, the language was terrible,” she said. “I can’t believe our own Navajo Nation president, Navajo Nation Council delegate, participated in these things. “The Asian people, I made friends with them,” Chavez said. “They’re good people.”

Regarding the Navajo Nation Police’s conduct, each protester had criticism and claims to make against them and the Federal Bureau Investigation, New Mexico State Police and San Juan County Sherriff’s Department, especially during the November raids. “The state police pointed an assault rifle at me and yelled something,” farmer Terry Pettigrew said about the day of the raid when he was trying to open his gates for authorities. “All this time I was walking toward him (officer) and he cocked his assault rifle at me,” he said. “I thought, ‘Is this the day I’m going to be killed?’” Pettigrew said he was searched and handcuffed. He said they asked if he had a gun and he told them he didn’t.

This interaction, he said, left him traumatized. Jacqueline Foster, who lives on a farm with her parents, said cops pointed guns at her kids and arrested her parents. Similar to other farmers, Foster said the Navajo Police wouldn’t help her in times of distress and when being harassed by protesters.

“The cops won’t help,” said Foster. “They continue and continue not to help. They say it’s our fault. It’s not. We need help. I want to save the farm. “All these farmers are good people,” she said. “They didn’t deserve to get treated this way.”

Louise Pettigrew said the Navajo Police pointed a gun at her husband Terry when he went to open the gate for officers to enter during the November raids. She said her family was handcuffed and made to stand outside in the cold. “I came out to see what was going on,” said Louise. “They all had guns on us like we were criminals. We aren’t criminal; we are good people. They made us stand outside … we were handcuffed. We didn’t do nothing. These police were really mean.”

Throughout the press conference farmers mentioned the wrongdoing and overstepping of the Navajo Nation government, leadership, police, and other law enforcement but none mentioned the person who was behind the cultivation, Dineh Benally.

The Navajo Times reported that Benally could be on the Pine Ridge Reservation peddling his marijuana business ventures. But during a January Oglala Sioux Council meeting, the Council voted to remove him from the reservation. Members of the tribe maintain Benally has not been removed and sent a photo showing Benally in front of the administration building on the reservation.

Police, on the other hand, say Benally’s farmers had ample warning to cease hemp production and some kept farming. In June the Navajo Nation filed a lawsuit against Benally seeking to stop him from “the illegal and unregulated growth, production, transporting, licensing, and selling industrial hemp within the exterior boundaries of the Navajo Nation.”

In September, Shiprock District Court granted a temporary restraining order and preliminary inunction against Benally and his companies, allowing for Navajo Police to begin shutting down his operation and telling workers to leave.

But the work continued. Navajo Police Officer Kyle Simms, who is assigned to Shiprock area, stated in an affidavit obtained by the Navajo Times in October that, following the TRO and preliminary injunction, he and other officers contacted each hemp/cannabis farmer and notified them of the orders and that they would have to stop operation.

“In providing these notices, we encountered many locked gates,” stated Simms in the affidavit, “which obstructed our ability to observe if hemp/cannabis operations were continuing.” Simms stated they were denied access by Benally’s security who told Simms they needed directions from their “boss” before they could allow access to the hemp farms. From previous encounters with security, Simms stated he understands “the boss” to be Benally.

Two days after the TRO and preliminary injunction were given, Simms said he was involved in a DUI checkpoint near Hogback, New Mexico. He came into contact with a non-Navajo hemp farm worker, who told Simms he was headed to work on a hemp farm. “His supervisor at the farm was Dineh Benally and that Mr. Benally had told him to continue working after the issuance of the court’s temporary restraining order and preliminary injunction,” stated Simms. “Mr. Benally had sent a text message to many farmers on a group text message on September 19… telling them to ‘keep moving forward.’”

In October, the Nation filed an order to show cause, which is “basically a civil penalty to someone who violates a court order,” explained Charles Galbraith, Navajo Nation special counsel, during an October community meeting. “At the hearing Benally could’ve been incarcerated based on the ongoing violations,” he said. “She (Judge Genevieve Woody) has the authority to fine or imprison him.

“She ultimately wasn’t prepared to make a decision based on the pleadings that day,” he said. “She continued that hearing and ordered the lawyers to file additional briefings.”

The delay that day gave Benally more time to continue his operations.

Farmers who continued to listen to Benally were met with authorities in November during what was called “Operation Navajo Gold,” or the raid the farmers referred to. This operation was a unified effort to execute search warrants signed by a federal judge relating to suspected illegal marijuana farming on the Navajo Nation.

Police estimated there were 57,950 pounds of marijuana worth approximately $1.8 billion on the black market.

Phillip Francisco, chief of the Navajo Police, said officers will only point a weapon at any person if there is a direct threat to their life, or if the person has a weapon.

He also said no formal complaints made in connection with the raid, and encouraged those making claims to report them so they can be resolved. “Claims that weapons were pointed at them are probably outlandish,” said Francisco to the Times. “If there is a specific claim to any of those things those should’ve been brought forward to myself or Internal Affairs.

“Everyone involved was ordered to wear body cameras,” he said, “if there are those claims we need names of officers, time, and date. But none of those claims have come to my office and I haven’t heard of those claims taken to the sheriff’s office, state police, or FBI.”

During this time, NNPD set up a special hotline for all calls regarding the marijuana farming and the trouble that followed. He also said the plants they seized and what the FBI destroyed during the raid was in fact marijuana, with “high grade THC level.”

“We had thousands of calls from both sides where we had to take reports from both sides,” said Francisco. “We weren’t biased. Most of the time it was a he-said, she-said situation, but they’re all documented.”

Another claim made by farmers during the press conference is NNPD continues to follow them. Francisco said his officers are too busy to harass people. “If they’re seeing officers behind them or driving in the area it’s because they’re taking care of normal business of other emergency calls,” said Francisco. “We have 5,000 calls a month (for the whole Navajo Nation) coming into the police department with only 200-plus police officers working.”

Francisco said the alleged marijuana farming caused a huge discord in the community and he had to assign 23 more officers to handle the amount of complaints in Shiprock. “Now that this warrant had been executed and things are done … there’s no more issues besides property issues of what was left behind,” said Francisco, who said equipment ownership is a civil issue that has to go through courts. “So hemp workers saying it was just hemp and no one was causing problem – no, it was causing problem with the amount of calls coming in and the discord it created,” he said.