Data from Bashas' regarding food prices. 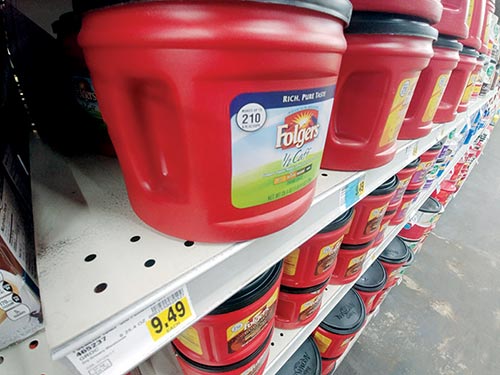 Navajo Times | Christopher S. Pineo
A price of $9.49 puts regular priced coffee $4.95 over the national average of coffee prices, according to the U.S. Department of Labor’s Bureau of Labor Statistics.

The original report found that Native Americans on reservations and in nearby communities tend to spend more on food than the national average, living on generally lower incomes than those outside Indian Country, under circumstances that make food access more difficult due to distance and transportation issues.

“I don’t think a lot of people outside of Indian Country know the extent of emotional strain that a lot of indigenous people go through just to eat,” said A-dae Romero-Briones, First Nations’ associate director of research & policy for Native agriculture.

The update captures food-price trends over the months of January, February and March 2017.

Data from Bashas’ regarding food prices.

Romero-Briones said the research will continue with the hope of revealing details of the difficulty of getting food on reservation land, compounded when Native Americans face higher-than-average prices after a long drive, according to the update.

“What we want to do is identify that lack of resources that Indian people do face, also to identify that it is hard to get food on the rez sometimes,” she said.

The update found that in the Lower 48 states, Native American shoppers pay $7.51 more for the “very same basket of food items” compared to consumers nationally.

The “basket” contained a loaf of white bread, one pound of ground beef, a whole chicken, one dozen large eggs, one gallon of whole milk, red delicious apples, a pound of tomatoes, and regular and decaffeinated coffee. The chicken, apples and coffee were priced by the pound.

The 2016 study actually covered prices at Basha’s. Researchers could not give the names of actual participants who went to the location to sample the prices. The information below shows the prices at Bashar’ compared to the national average in October 2014.